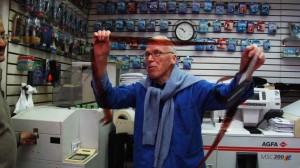 The Academy has released a list of fifteen potential feature-length documentaries that may or may not be nominated for the Oscar this year – five of them for sure. The biggest surprises from this announcement are omissions of the more popular docs that have been snubbed – a few of which seemed like locks. The Disney doc African Cats, the late show host-centered Conan O’Brien Can’t Stop, the urban violence themed The Interrupters, Werner Herzog’s Into the Abyss, the Ridley Scott produced Life in a Day, the psychedelic Magic Trip: Ken Kesey’s Search for a Cool Place, Morgan Spurlock’s POM Wonderful Presents: The Greatest Movie Ever Sold, and Errol Morris’ Tabloid were all subjected to an A.M.P.A.S. cold shoulder. Even the racing doc Senna – recently nominated for Best British Independent Film by BIFA – is currently eating the dust with the rest of the overlooked.

So do any previously popular docs have a chance? If you look hard, yes. Project Nim, the summer film that follows a chimp adopted by a family who treats the primate like a human, jumps out immediately as one of the eligibles. Another one much less commercially hyped yet still hit this movie guy’s radar upon release is Bill Cunningham New York. It follows the bicycling octogenarian photographer who’s made a living snapping shots of interesting clothes on standard NYC citizens. This little film not only remains eligible, it’s a nominee for Best Documentary at the Gotham Independent Awards.

There were a few more titles that caught my eye on the Academy’s list because I recently read them as BIFA or Gotham nominees. This makes me speculate these titles as the front-runners. Aside from Nim and Cunningham, these titles include Hell and Back Again and Pina.

Below is the Academy’s list. Those with an asterisk are currently playing on Netflix Instant – if you’d like to judge for yourself.

If a Tree Falls: A Story of the Earth Liberation Front*

Under Fire: Journalists in Combat

On the next “Mr. Oscar” Meier: The nominations for the Film Independent Spirit Awards, the picks of the New York Film Critics Circle, and the winners of the Gotham Awards.