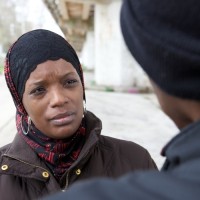 When I watched Steve James’ awe-inspiring documentary Hoop Dreams, I was convinced that I had been tricked. Everything came together so perfectly, I just knew that it had to be staged somehow. But the film was entirely real, it’s just that James has a skill for catching his subjects at their most unguarded. Errol Morris has his Interrotron to catch people letting loose a kernel of the truth in a single sitting, but James embeds himself with his subjects until he gets just the right shot. It’s no mistake that a group of geese fly through an establishing shot of a correctional facility; how long do you suppose it took to secure that image? James spends an entire year – helpfully broken up by seasons in the film – building a relationship with the people being filmed and attempting to learn about them, all so that he’ll be able to pull their stories into one coherent whole.

The film follows several members of CeaseFire, a group in Chicago which employs people as “Interrupters”. Their job is to prevent violence wherever possible, by talking their peers down. In a city that was once compared to a war zone due to the number of homicides that were occurring regularly, this is a huge and sometimes dangerous undertaking. It does take a lot of effort and requires the Interrupter to form a relationship with the person they’re trying to save. This is why the film must take place over the course of a year, so that we in the audience can see how much work goes into a single case. These people are not super-human; they have their own lives, and sometimes despite their best efforts there is nothing that can be done to prevent an outburst of violence. But they stick with it. They put themselves in harm’s way, if only to convince one or two troubled youths that the only way to stop the cycle is to stop the cycle.

That’s a hard lesson to learn. Each of the Interrupters were once involved in criminal activities themselves, so they know first-hand that it’s not easy to break free. “There’s over 500 years of jail time in this room,” one Interrupter notes, to illustrate the wisdom that the group has to offer. One of the three members of the group who are given the most screen-time is Eddie, a Latino man who dedicates his time to helping prevent bloodshed after he himself killed a man, for reasons that are incomprehensible to him now. He takes the camera to the neighborhood where the killing took place, remembering that day and admitting that he still doesn’t feel that it’s right to contact the victim’s family. But it is through this guilt and pain that Eddie is able to help others. He visits elementary schools to talk to children about the disease that violence is – a communicable disease, one that spreads with contact. Some of the children know first-hand the kind of horrors that Eddie describes, at such a young age.

Also chronicled in-depth are the relationship that Interrupter Ameena shares with her charge Caprysha and the tentative bond that Interrupter Cobe forms with a trigger-happy thug who goes by the nickname ‘Flamo’. Both of these relationships require immense effort on the part of the Interrupters, as just when great strides seem to be made, suddenly everything backslides. Flamo tells Cobe that he hasn’t gotten into any physical altercations recently and in fact talked others out of resorting to violence. When Cobe expresses happiness and encourages this step forward, Flamo admits that he had simply threatened to hurt the two men because they were arguing in front of the house where he was doing drugs. It’s a long, hard road.

Because of James’ unparalleled vision and incredible ability to become a fly on the wall of the most intense exchanges, the film contains some downright amazing footage. A violent encounter breaks out with Ameena trying to keep the peace, one woman hurling chunks of concrete at a man and another swinging wildly with a knife. The quick-thinking Interrupter hurries one of the participants away, driving him around town to calm his nerves. She may have quite literally prevented a murder at that moment. Later, the camera watches as the Interrupters try to console grieving friends and family at the scene of a homicide, doing their best to reduce their rage before one of the mourners gets it in their head to attempt a retaliatory attack. A police car whizzes by with sirens blaring and soon the murmur of rumor reaches the crew: another murder had taken place mere blocks away while so many were still trying to comprehend the tragedy of this incident.

And so the group’s message remains: “Stop. Killing. People.” Certainly much of the crime is spurred by gang activity, the honor of an identity can drive a man to extremes in an effort to maintain that pride. A fiasco almost breaks out at a home for violent youth over five dollars, not because of the money but because of the principle at stake – one party felt snubbed by the other, and this was a matter for which taking another person’s life became justified. Many teenagers note that they don’t even fully understand the boundaries, but that’s the way it has always been and they feel powerless to remove themselves from the grasp of such brutality. But while much crime is gang-related, a lot is simply individual outrage. There aren’t any jobs coming to this area of Chicago, and that increasing despair can lead anyone to lash out suddenly. When you feel that life has been unfair to you, the tiniest slight can set you off.

And once again, the movie feels perfect. Unlike Hoop Dreams, which could just as well have been a fiction film, The Interrupters never feels like anything other than documentary. Yet events come together in poignant ways, the youth of the city express their fears and desires with piercing honesty, and yes – there is a startling turn of events which is explored in the epilogue and packs a real punch. “They said I’d never find work as a felon,” one teen ruminates while clearing dirt for the job he had earned. “I’m working.”

That verve is exactly what keeps CeaseFire and their Interrupters going. It may seem impossible to stamp out violence altogether: the disease mutates before the vaccination can be applied. But this doesn’t stop them from giving their all, literally throwing themselves into the task. Their work is stunning, though the distance yet to travel can be depressing.
But hey, they’re working.