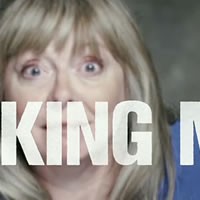 Joyce McKinney, the central figure in Errol Morris’ Tabloid – the latest in a seemingly endless string of exquisite films from the director – has apparently taken to decrying the film that tells her story. “It’s not my story. And I definitely plan to sue them. What they did was unconscionable,” McKinney has said, with regard to Morris’ documentary. She obviously had no idea who the director was when she agreed to the interview. Morris’ films take what are generally already bizarre personalities and wring out of them some deeper considerations. A former private investigator, Morris has long proven to be interested in digging under the surface; not to get at the truth (whatever that may be), but rather to uncover and ponder further questions. Tabloid really is Joyce McKinney’s story because she is given the opportunity to tell her story, but the film also looks at the events which transpired from other angles, all in exploration of the broader theme of individual perspective.

What is McKinney’s story? In her recollection of events, she fell in love with a Mormon man named Kirk Anderson who was whisked away by his cult to England for purpose of brainwashing. She followed him there and the two escaped the clutches of the Mormons, sharing a romantic and supsiciously bondage-heavy weekend away from the hustle and bustle of the big city. Returning to society, a massive manhunt had begun because, although Kirk went willingly, the Mormons had thrown accusations of kidnapping. Once Anderson was back, they took control of his mind again and forced him to verify their version of what had happened. Those on the other side of the fence see her devotion as obsession, the couple’s journey to the cottage as false imprisonment, their lovemaking as rape. Regardless, McKinney became a minor celebrity at the time due to her extroverted personality; she rubbed elbows with the rich and famous even as she was leaving England in disguise to avoid prison.

“It hurt me when you guys laughed,” McKinney told the audience at the New York City premiere of the film. Their laughter, the humor that the film finds, is not an attack on the woman. Morris has a unique method for conducting interviews, one which must be mentioned in practically any review of the man’s work: he has invented a device called the Interrotron. The device connects two monitors with a camera, so that what the interviewee sees is Morris himself looking at them, only the screen they’re viewing is also the camera capturing their actions. This makes for a much more conversational tone – instead of subjects looking past the camera, they look directly into it – they look directly at the viewer. Because they are seeing and talking to the man interviewing them, they forget that it’s all being captured. It gives the interviewee the opportunity to reveal their own biases, to say things off-the-cuff that they maybe wouldn’t if they are thinking about the interview process throughout. The method allowed Morris to capture moments when McKinney slipped up, mispronouncing a word or behaving oddly. Those found moments are not only made by McKinney – tabloid journalist Peter Tory uses the word “spread-eagled” a dozen times to describe the way that Anderson was tied to the cottage bed, a habit he probably didn’t realize but which Morris, with his, ahem, eagle’s eye for such details, quickly latched on.

And that’s the point. To laugh, to be confused and disturbed and to be provoked into thought. Is Joyce telling the truth? Does she believe that she is? Is she simply out for attention? Do the facts lie somewhere between the stories? Many (if not most) make comparisons to Akira Kurosawa’s Rashomon, a film which tells the same tale from multiple points of view. That’s something of a mistaken comparison, though, just as that New York Times article is mistaken in calling Standard Operating Procedure a movie about crime. This isn’t about telling the same story from multiple perspectives and trying to determine which is the right one, though that temptation is certainly manifest in the final product – all of the consulted experts, an ex-Mormon missionary in particular, spend a great deal of time trying to determine what level of guilt a Mormon man would feel if he had been robbed of his virginity, how much of what happened was done willingly, and just how weird McKinney really is. But if Tabloid isn’t about what happened that weekend back in the 1970s, then what the hell is it about?

It’s about Joyce McKinney. It’s about her. It’s about the way that her mind works, about the way in which she reacts to things, about the way that she sees herself. The movie touches on the religiously charged sex scandal, of course, because that is what drew her into the spotlight (in addition to some other escapades later in life). But Morris doesn’t really ask anybody, “Do you think Joyce McKinney raped Kirk Anderson?” This isn’t that kind of movie. This isn’t The Thin Blue Line, and the re-telling and re-telling of the same story from multiple perspectives in that film can be seen as markedly different from this. That film was trying to fit together the pieces, to show the holes in various witnesses’ stories. The questions that Morris poses to his interview subjects here are largely about Joyce herself. When interviewing the pilot that flew she and an accomplice across the ocean, more time is spent talking about the revealing outfit that McKinney wore when they first met than there is talking about the scandal. When Morris speaks with a photographer who discovered (or fabricated, according to Joyce) a cache of nude photographs the woman had taken when she was younger, there’s no distinct attempt on the filmmaker’s part to tie this back to the accusations of rape. The viewer is free to make the connection, well, if she’ll do nude modeling shoots and possibly prostitution, then of course she’s also a rapist! The movie itself does not specify this, however. Instead, it wants to focus on the relationship that Joyce shared with her dog Millie.

In a way, McKinney is right when she cries out that Tabloid is “not [her] story”. It’s not her story, insomuch as it is not the story that she wanted told. She wanted the movie to tell the story of the events that took place in England, and she wanted it spun in a positive manner. She’s been attempting to write a book about what happened for years now, and prior to the release of the film, it seems that McKinney believed that Morris’ documentary was intended to be the silver screen version of her unfinished novel. It’s not that, but it still is Joyce’s story in the sense that it gives us a look into her life, into the mechanics of her mind. It gives us a look at other people who interacted with her, it allows us to consider the way that they see her and see themselves as well. And it also allows the viewer to consider the way that the audience sees the people presented on the screen, it provides you the option to pass judgment in any manner you choose, without being told how to react.

Furthermore, much as with any of Morris’ work, it’s a technical marvel. Shot through with stunningly beautiful imagery (the recurring television set in particular is gorgeous), Tabloid is a marvelous addition to the director’s oeuvre. And just altogether a spectacular film.