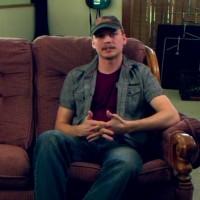 “I think you making movies is exciting. I’m glad that you enjoy it. And the final product is, uh, usually pretty neat to see and proud of it. The process, though, um, the time that it consumes, um, you know, you work a full-time job and then you come home and you start editing, um, you know, until it’s bedtime. That’s frustrating. Um, the money that it’s costed has been, you know, a little stressful.” —Melissa Amon

Christian filmmaker Larry Amon’s documentary Breaking Good: A Journey to Making Better Christian Films does not live up to its title. Nevertheless, for followers of the genre, or even for those who are interested in the film industry—specifically, the stories of those who desperately want to be involved in the film industry but have never found stardom—it’s a fascinating work of brutal honesty. In that respect, the movie is wildly successful. Yet this clashes with its home video aesthetic (much of the documentary is literally unedited footage of Amon’s children mugging for the camera), lack of focus, and over-long two-hour runtime. Yet fans of Christian films, as the subjects of the documentary would readily admit, must be willing to look past a lack of production value and a lack of talent to get something out of these movies. Consequently, the unexpected frankness of the subjects and the probably unintended psychological study that results is far more memorable to me than Amon’s incredibly loose handle on documentary filmmaking.

The movie does not introduce its subjects until after 18 minutes have passed. First, it describes Amon’s own journey into Christian filmmaking and the impact it has had on his family. To somebody interested in film, even if they have never actively pursued employment in the industry, his story is immediately relatable and saddening. He’s worked 40 jobs since age 15 and despite still being in the throes of a life-long existential crisis has settled into a career doing “computer work”. Yet he thinks back fondly of working in a movie theater as a teen, and about making amateur movies as a college student (“Cubby Ninja Films was born!” he enthuses, as though his friends’ fun little joke project was a major milestone in cinema history). Yet as he made these films, he grew concerned about the lack of religiosity in mainstream media. “Didn’t Shaggy, or Fred, or Velma ever go to one Sunday school class?” he asks, apparently sincerely.

All of this is lead-up to introducing the actual movie; yes, the documentary is about itself, constantly referring to the act of making a documentary. The moment in which Amon decides to make the very movie you are now watching is part of the narrative. It bootstraps itself into existence.

But when it gets to the interviews, it is stunning. Amon interviews 20 Christian filmmakers and actors (including himself), as well as one Christian movie fan. Though I consider myself pretty involved in the Christian movie scene, the only names I recognized were Chip Rossetti (director of Gramps goes to College) and Daniel Knudsen (who directed the loopy libertarian thriller Creed of Gold, for which I still need to write a review). It’s remarkable how similar their stories are, including Amon’s, and the way they justify to themselves the work they are doing.

Almost all of the interviewees cite Star Wars as the movie that sparked their desire to be in the film industry, and the Kendrick brothers’ Facing the Giants or Fireproof as what made them believe they too could be a star. Almost all of them maintain that they are in fact in “the film industry”, and have been for ten or more years. They all claim to have worked on multiple “feature films”. Several of the interviewees, when discussing their work in “the film industry”, refer to work done as an extra on television shows or movies. After visiting Irene Santiago Baron, for instance, Amon and his daughter note how frequently she wanted to talk about her work as a minor character in High School Musical years ago. Amon himself finds himself compelled to point out his uncredited background appearances in ‘Homicide: Life on the Streets’ and in a large crowd scene in the Keanu Reeves film The Replacements. These are the high points of their work in “the film industry”.

All of the subjects claim that they felt “a calling” from God to make movies, despite the intense expense, labor, and lack of return on investment. Most of them want to use the medium to exhibit God’s love, but Steve Deace is only interested in letting people know that they’re most likely going to Hell. (It’s not clear whether Deace recognizes that he’s going to Hell, too, but I’d be willing to bet not.) Chip Rossetti’s origin story is particularly wrenching: after being in a car accident, he lost his job and was wandering around his home when he came upon an old script he had written. He decided then and there to dedicate himself to movie-making. Now God is punishing him by forcing him to make movies with Donald James Parker for eternity.

The main thing I took from Breaking Good, though, is how committed all of these individuals are to making excuses for their failures and their refusal to believe they could be anything other than temporarily displaced movie stars. Even Amon’s not immune. When his college radio show fails, he attributes it to the fact that “long form radio was dying”. When he fails to get any money for this movie that you are now watching, he claims that Kickstarter was no longer popular. Multiple interviewees, when discussing the negative reputation that Christian films have, reference other bad movies without turning the lens back on themselves. Or when they do, they are more forgiving toward themselves. Ron Newcomb complains that only in movie-making is one expected to “hit a home run” immediately (i.e. make a good movie).

Amon goes on to ask what defines a Christian film and the responses vary. Deace doesn’t think it’s a Christian film if you’re not threatened with Hell by it. Santiago Baron thinks anything’s a Christian film if you say it is. Sandon Yahn claims that if your movie doesn’t explicitly reference Jesus, then it shouldn’t be made; later in the movie, he backtracks because he realizes he likes Star Wars and decides that if a movie “doesn’t have any redeeming values”, then it shouldn’t be made, whatever that means. Nathan Tauch talks about the importance of keeping his movies G-rated, but doesn’t seem to have a clear idea of where the line between acceptable and unacceptable behavior in a Christian film lies. “In my films, there’s no nudity,” he says, “and there is, um, you know, sometimes we have borderline… uh, profane language, but I prefer to keep it clean.”

Amon asks some genuinely probing questions, such as what these filmmakers believe makes a “good” film or whether they have felt let down by God for having not found greater success in their hobby. In response to the first question, Santiago Baron gushes over Captain America: Civil War, before going off on a tangent about the fact that the original version of The Karate Kid did not use CGI and why CGI isn’t necessary for a movie to be good. In response to the latter question, some of the filmmakers were willing to admit feeling let down at times, but they have all chosen to soldier on, convinced that it they are doing God’s will. But ultimately it’s a numbers game, and when I say numbers, I mean dollars and cents. Shawn Justice confides that if you spent between $150-$250K on a film, you can afford to get a relatively well-known actor on board (hello, Nicolas Cage!) and you are “pretty much guaranteed to make your money back.”

After two hours of 20 Christian filmmakers each saying variations on the same thing in direct response to written questions, interspersed with footage of Amon’s children playing with the camera, the documentary ends with “a parting message” from “Actor Gary Nation”. You know, Gary Nation. The Actor. Nation’s parting message seems completely improvised as he stumbles across a convoluted plea, or prayer, that Christian filmmakers will grow to rival secular filmmakers. He prophesies the masses becoming enthralled with Homeless for Summer Vacation or Gramps goes to Mars or whatever: “Even if they don’t like our message or particularly like what we’re, what we have to say, they will have to acknowledge, even grudgingly, that… we did good work. That, hey, that’s a good film, like what they’re saying or not.”

Yes, that boundless need for approval and fantasy of being told they’re doing good work continues until the very end. I know it sounds as if I’m poking fun at the interviewees and the filmmaker himself. To some extent, I am; their conviction that they’d all be big stars if the system wasn’t rigged against them is pitiable, like the man in Salesman who tells himself he’d be a top seller if the leads weren’t so bad, though from the outside it’s apparent this is self-delusion. Yet Breaking Good, etc. etc.’s willingness to expose the reality of filmmaking on a micro-budget, to explore the challenges attendant to it and the shared characteristics of the type of people drawn to this work ultimately makes the documentary, to my mind, extremely compelling. It’s brought down a lot by how repetitive and poorly made it is, but the perspective it reveals makes the film worthwhile.

This is definitely not a good movie. It has no authority to tell others how to make “better” films, nor could it if it actually tried. Despite that, I would recommend it. Breaking Good, perhaps by accident, tells a provocative story. In the sense that it effectively communicates the humanity of its subjects—and only in that context—I might even say it’s actually a pretty good documentary.