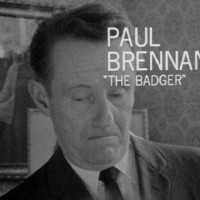 Albert and David Maysles are better known for directing the cult documentary Grey Gardens, but their first film Salesman shows them already at the top of their game. The movie chronicles the lives of four door-to-door Bible salesmen in the late ’60s, each man with his own quirks – each working for a different reason.

The men live together in motel rooms where they smoke cigarettes and spend time talking about what worked or didn’t work at each of their sales calls. And then they go out. It takes a certain kind of person to be good at sales, especially of the sort shown in this film. It’s a high-pressure business: it takes a lot of perseverance to turn a ‘no’ into a ‘yes’, which is what all of the salesmen have to do. They are skilled at the art of manipulation. They listen for cues, tailoring their words in order to literally guilt their prospective buyers into agreeing to monthly payments for a useless Bible.

It’s unclear, actually, how the salesmen themselves feel about the product that they are peddling. There’s a scene that takes place at a sales meeting in Chicago; the salesmen trade estimates for how much they will make in income for the next year, but then get moralized to by the Bible’s producer who tries to get the men to think of themselves as providing a valuable service to their clients. Maybe it’s a little bit of both. You can’t very well sell something you don’t believe in. Perhaps that’s why the de facto main character Paul “The Badger” Brennan is losing his touch.

Brennan complains about the quality of his sales prospects, excusing his lack of sales on the type of people in the neighborhood. He isn’t shy about pigeon-holing people based on their national ancestry. Brennan smokes cigarettes and stares off into space, he repeatedly slides into a mock-Irish accent because he thinks it’s funny, and otherwise seems to be coming to the end of the ride that is sales. But when you’ve tied yourself to something like this, it’s not easy to get off. The other salesmen – The Gipper, The Rabbit, and The Bull – are all mostly more successful at their jobs than Brennan is. They too have to struggle with the demands that their job places on them, but they are younger and therefore better suited for the pace. Or as the case is with The Bull, they’ve just got a talent for smooth-talking.

The sales calls themselves are almost painful to watch. People are pretty much bullied into buying Bibles – there’s a way to overcome every objection. Where reason fails to convince a prospect, emotional appeals will do just as well. How will this Bible benefit your children in the long run? Several of these scenes just blew me away. The salesmen return from their outings and ask each other, “How was the battle?” Because each sales opportunity is really treated as though it is a battle. They have to tread lightly, to mold the conversation so that it leads to their desired outcome.

But there’s more here than just the sales calls. Watching the men interact with one another is as much of a treat. They are all in this together, and yet they are all reacting to it in their own way. Watch the men nervously look toward their watches when Brennan begins his usual list of complaints, or the way the younger salesmen are able to relax more than the older men can. Hell, just watch the way that the men smoke. Say what you will about the health hazards of smoking cigarettes, but I swear that using a cigarette as a prop in a film is about as inherently wonderful as is adding handclaps to any song. It just makes everything better. This was an era where smoking was the norm, not the exception, giving each of the men a certain air of… well, different things. For some of the men, it signified aloofness. For others, despair. Maybe it meant more for I the viewer than for them.

Of course a lot of the credit for the film’s success goes to the editing of Charlotte Zwerin. The knack of the Maysles for finding shots that felt almost too perfectly constructed to be natural, combined with Zwerin’s skill for placing scenes together to build their significance makes for a remarkable experience. Just listening to the way the subjects in the film talk is often as riveting as the events that take place.

Salesman is an extraordinary documentary. I know I’m having trouble articulating what makes it so great. I guess it’s clear that I am no salesman myself. There’s this scene in Errol Morris’ documentary Gates of Heaven where a woman goes into a sort of monologue about a nearby pet cemetery, but winds up talking instead about the fact that her grandson doesn’t appreciate her. It is a jaw-dropping scene because the words she speaks seem so perfect that if they had been scripted, it would have made it a certain contender for some Best Writing award. But it was real. Here, almost every scene works like that. If it were scripted, it would be spectacular. The fact that it’s all true, well, that only makes it more exciting.

This is a film you should definitely check out.