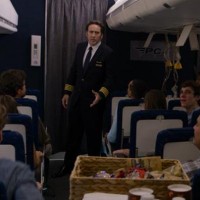 When I initially learned that 2014 would bring a remake of the Kirk Cameron action-Rapture-thriller Left Behind, I was very excited. The movie was bringing together two of my favorite things – Nicolas Cage and bad Christian movies – and therefore it felt like something that had been tailored specifically for me. But as the release grew nearer, I started to worry that the film would follow the path of so many latter-day Nicolas Cage movies and a frustrating number of recent Christian films by just being boring. Unfortunately, that is the case. The movie takes maybe 20 minutes of material and stretches it to five times that length. Its story is painfully repetitive, facile in its religious message, and totally wastes the most interesting character from the original series, Rayford Steele (whom Cage portrays here), by stranding him alone in the cockpit of an airplane throughout almost the entirety of the movie.

I say “alone”, even though superstar investigative reporter Cameron “Buck” Williams (Chad Michael Murray) is with him most of the time because Williams is a non-entity. Also, giving him the first name “Cameron” as a nod to Kirk Cameron? Why? It’s a dumb addition that just forces people to clarify who he is every time he’s introduced. But yes, Murray has no charisma. He was the main character of the original series, but he’s a glorified plot device here, and the suggestion that he’s a journalist of any sort is laughable. He exists to draw out exposition from other characters or, alternately, to provide it himself (“The plane’s wing is on fire!”).

The first person to whom we are introduced is Chloe (Cassi Thomson, of Cop Dog fame), so it’s natural to assume that she’s the main character. Yet once the Rapture occurs (sorry, spoiler!), she spends almost all of her time walking around in a daze. Her story is precisely what I mean when I say that the movie is 20 minutes of material spread out way too thin. I’m pretty sure Chloe, in a panic, walks past at least a dozen women holding swaddled bundles of clothing where babies once were (having since been Raptured). She comes alive toward the end of the movie, but even then her role seems contrived.

So it appears that the main character is Steele, since he’s being played by the biggest star. But the movie doesn’t really give the sense that he’s the character’s whose journey we’re following, either. His moment of revelation when he connects the dots between his wife’s recent conversion to wacko Christianity (Chloe’s words, not mine) and the inexplicable vanishing of a seemingly random number of people on his airplane – it’s unearned and moved past quickly to get to the action-packed finale. It’s not that I wanted the movie to be preachy, but that it doesn’t seem to have a grip on what it’s trying to say. If it’s a movie about God, what about God? If it’s about Rayford Steele, what about him? By movie’s end, Steele seems to have given up his philandering ways (he was flirting heavily with a flight attendant at the start of the movie), but why? Okay, I get that he’s ostensibly gone through a traumatic event that he’s willing to attribute to the Rapture of Amageddon Christianity, but the leaf he turns still doesn’t make any sense. He doesn’t learn anything or grow as a character – he simply chooses to change his conduct. Actually, I think the movie believes he has grown, but the evidence suggests otherwise. The Rayford Steele of the original Left Behind also latched onto Christianity as an answer immediately, but in that movie it was apparent that he did so out of overpowering grief and weakness. I love Nicolas Cage and I maintain that he’s a great actor when he wants to be, but he utterly fails to imbue his version of Steele with any humanity. Not that I can blame him for refusing to commit to a remake of Left Behind, but then, why take the job in the first place?

Like other Rapture movies, the theology of the End-Days is sketchy. It seems one half of every couple is Raptured, leaving the remaining spouse to mourn. The movie makes a point of showing that a very old woman is suffering from dementia, and then strands her on Steele’s aircraft when her husband vanishes. What prevented her from being “saved”? A woman says that all children have been Raptured: how young do you have to be to get saved automatically? Chloe’s pre-teen brother vanishes, even though her mother kept a note of people she needed to witness to in her Bible, which included his name. Is it impossible for 12-year olds to deny God, or whatever it requires to be Raptured? Also, the movie early on has Buck Williams tsk-tsking while telling the tale of a woman who thanked God for saving her after a hurricane destroyed her village and left three of her children dead; his story ends with the woman dying in a mudslide the next day. But the movie never seems to argue that the woman was anything other than delusional and pitiable. So when a man hears about the Rapture and asks whether it’s the work of the devil, or when Chloe insists “the God my mother talked about wouldn’t do this,” there’s never any counter-argument. Not only does it fail to sell Christianity in the first place, but it appears to paint God as a grand-scale terrorist. Chloe, at the beginning of the movie, silences a street preacher by asking, of the seven years of horror that will follow the Rapture, “couldn’t God just stop it from happening?” And the movie itself remains silent on this objection. It doesn’t know what it believes.

Then there’s the dispiriting reliance on jokes about dwarfism – the movie, or at least many of the people in the theater at the screening I saw – apparently found the mere appearance of Martin Klebba on-screen to be hilarious. There’s a depressing sequence where a Muslim passenger is accused of terrorism which relies in part on the audience’s belief that he just might be a terrorist even though it’s been clear from earlier scenes that he’s a good samaritan (also, to double back for a moment, this Muslim character remains suspiciously out of sight once people start talking about Christianity being the solution to the vanishings… I guess the movie didn’t ACTUALLY want to initiate the conflict-of-faiths it had set up). And beyond the blatantly prejudiced, there’s a lot of other broad caricatures pretending to be human. See, for example, the thick-jawed businessman with a Southern drawl who admits that he didn’t think about his daughter when the vanishing occurred because he was too busy thinking about “money, opportunity, and profits.”

In all, Left Behind is definitely a bad Christian movie. But it’s not bad in the hilarious manner I look forward to, nor is it even bad in the bland way I suggested at the start of this review. Instead, it’s bad because of how disappointing it is. I guess it’s true to its predecessor in that regard, because I felt that Kirk Cameron’s version of the story also wasted its potential. The movie isn’t confident in its story, its characters, its religion or the implications of the event. It doesn’t even look good. It feels, at its heart, like nobody was really trying very hard. As a Nicolas Cage fan, I can usually defend even many of his questionable movies on some level. I don’t think I can muster the energy here. It’s just a worthless movie.