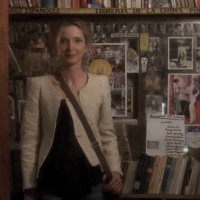 So much of what made Before Sunrise so winning was in the small moments: the shy glances Jesse (Ethan Hawke) and Celine (Julie Delpy) shoot one another while listening to a record with headphones on, the hesitation on the ferris wheel when Jesse wants to lean in for a kiss, the aching need to cling to this moment as long as possible when they dance on the street in the early morning hours after their long night of getting to know and falling for one another. It’s a pleasure to say that Before Sunset, which checks in on the characters nine years after their brief encounter, retains and matches its predecessor in capturing those tiny instances of unspoken sincerity.

I’d seen the movie once before, but upon first viewing I felt little passion for it. I believed it was very good, but to some extent it felt like a re-tread of the first movie. How wrong I was. To quote my review from another movie whose depth I could only begin to appreciate on a second viewing, “Part of the reason I could see [Before Sunset] better this second time around is that now I know the characters.” As Jesse and Celine walk through the streets of Paris, in something close to real-time, they discuss the idea that each person has a central, unchanging part of them they retain throughout life. Whether that’s true in life or not, it is true for the series: Hawke, Delpy, and Richard Linklater have crafted the lives of Celine and Jesse carefully. They know who they are because unlike some movie characters who cease to exist when the tape stops rolling, these characters are alive. They have desires, hopes, fears, regrets. They have memories and plans. They have souls. And I guess that’s what I see when I latch onto those fleeting instances of emotion played out through body language. I see something that doesn’t feel written, even if it was. Words, even if improvised (an accusation often lobbed at Hawke and Delpy in these films), invariably feel selected, but a look, or a tremor, or a cracked voice reads as instinctual, as unconsciously revealing deeper truths.

So. Early on in Before Sunset, Jesse sees Celine after a book reading at a Parisian bookstore. He’s written a thinly fictionalized version of their night together which has afforded Celine the opportunity to meet up with him. You see, they never exchanged numbers when they left each other at the train station in Vienna, so they’ve lived the last nine years without knowing what might have come of their chance encounter. They’ve both moved on since then, in a manner of speaking, but they’re pestered by the question: what if? When they reconnect, they walk to a nearby coffee shop to catch up, and fall easily back into the rhythm of jokes and politics and philosophical pondering. What I noticed on this viewing, which I didn’t seize on before, is the goofy way Jesse can’t stop smiling at Celine. Every time she speaks, when the camera cuts to him, he’s looking at her with awe in his eyes and a grin on his face. It’s adorable. But it’s also indicative of something we will understand by the end of the movie, which is that he’s already made up his mind: what he had with Celine one night in 1994 was real, and he’ll do whatever it takes to never let it end.

But we as viewers—at least upon the first watch—are not aware of that yet. Unlike their last meeting so many years ago, their time together now is limited to an hour or so (instead of a full afternoon, evening, night, and morning) because Jesse is set to board a plane back to the States. As stated above, the movie unfolds in something close to real-time: the effect is almost as if a timer has been placed on-screen, ticking down the seconds. We, like the characters themselves, are keenly aware of the limited time they have together. Each attempt to prolong their inevitable parting is a relief, though bittersweet. Celine suggests Jesse has to leave, but he proposes they take a ferry down to its next stop and the driver hired by his agent could pick him up there. They get to that stop and their reluctance to leave causes him to suggest that the driver drop Celine off at her apartment. The pain of reaching her apartment causes him to suggest walking her to her door, and then up the stairs, and so forth. The constant threat that this moment will dissipate is at top of mind in a way it was not in Before Sunrise, and that adds a delicious tension to this film.

Also, whereas the bulk of Before Sunrise is a philosophical conversation as Celine and Jesse navigate one another’s politics to decide whether they are compatible at all, here their conversation focuses more inward. Take that ride back to Celine’s apartment, for instance. She curses the fact that he’ll likely be leaving soon, that she so frequently lets herself get swept up in impossible dreams of romance. She laments the fact that men tell her she’s taught them how to love, but then leave her for others. Not to be outdone, Jesse eulogizes his failing marriage, which he describes as platonic and surreal, giving him the sense that he’s “running a small daycare with someone [he] used to date.” I got the sense that the pair shared the negative aspects of their lives in the previous film because they wanted to get a sense of how the other would react; here, it feels like something closer to catharsis… being able to speak these terrors aloud for once.

When Celine recognizes Jesse making himself vulnerable emotionally, it leads to one of the most wonderful of those small moments. While he looks out the window of the van, she wears a look of empathy or concern. She raises her hand to touch his face, to provide some brief measure of comfort, but pulls back just before he turns to look at her. It’s strongly reminiscent of one of my favorite images in Say Anything, when Diane Court reaches out to place her hand on Lloyd Dobler’s back, but pulls away because she is uncertain about what it means to make that contact.

In all, what makes Before Sunset so winning is in the way the characters feel not just “lived-in”, but living. The real-time conceit makes everything seem much more immediate. This isn’t a story about something that happened to these people once upon a time. It’s happening right now – and the movie sells that feeling splendidly through the filmmaking craft that went into its structure, through the rich and realistic dialogue, but most importantly (to my mind, at least), through those unspoken, unconscious movements of the actors, you can feel the characters’ hearts beating.