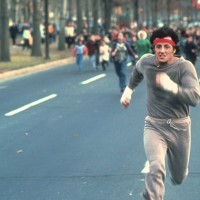 I had mixed feelings after the first time I watched Rocky II. I had been impressed by the original movie for its heartfelt sincerity, the painfully honest romance that provided the film’s real story. Yes, the boxing match at the end is important, but when the news cameras swarm in and surround the Italian Stallion after the fight, the only thing he can think about is, “ADRIAN!” That really spoke to me. So when I watched the rest of the series, I kept my eye on that story – on the story of Rocky and Adrian – and so the first sequel felt slight to me on the first viewing. It was easy for me to sympathize with critics who called the movie a re-tread of the first movie, given that the final fight was a re-match with Apollo Creed and a lot of Rocky’s training is similar to the first film.

This second viewing showed me just how wrong I was. Part of the reason I could see Rocky II better this second time around is that now I know the characters. I watched the series before thinking of it like the Seven Up documentary series, i.e. I was watching it with the idea in my mind of keeping tabs on how this family’s life changes over the years. So many important things happen between the early ’80s and the final film in the mid-2000s. Mickey dies. Creed dies. Rocky and Adrian strike it rich, then have to return to their beginning once again. They have a child who grows up into a rebellious boy and an even more rebellious adult. Rocky gets old; he finds himself alone. Now that I know the entire story, now that I’ve seen their history and am well aware of what it in store for the characters, it brings so much more weight to scenes like the one right after Rocky and Adrian’s marriage. They return to Rocky’s little apartment and lie on the bed, where Adrian confesses her concerns.

Adrian: I hope you–

Adrian: You never get tired of me.Rocky: Oh, no. You ain’t never gettin’ rid of me.Adrian: I hope nothing changes.

Rocky: I ain’t changing. I sure ain’t never changing nothing about you.

What’s so heartbreaking about this scene is that, yes, of course everything will change. It has to. Adrian is still fairly shy at this point, but by the time the third movie comes, she is able to stand up on her own and express her feelings openly. Earlier in Rocky II, she still feels the need to lean down and whisper her “I love you” into Rocky’s ear. Their life will change – they will move into a mansion and have to find each other again. But just because things change, it doesn’t mean that things are necessarily changing for the worse. Rocky is completely serious when he said that Adrian will never get rid of him. Through the years, their relationship stands strong as the one constant in both of their lives. It’s so incredible watching this scene, knowing it’s only the beginning of a long and wonderful marriage.

But it’s not just the Rocky and Adrian storyline which is so touching, although that is one of the strongest aspects of the series as a while. There are no “bad guys” in the first few Rocky movies; everybody is shown with some sense of humanity. Although the mob boss Gazzo employs people to break the bones of those who don’t pay his loans back, he is not entirely malicious. He is truly Rocky’s friend. He might have money on the fight, but he’ll bet on Rocky, win or lose, no matter what the odds are. And he’ll always be there cheering him on in the front row. Adrian’s brother Paulie can be a handful at times, and certainly has a selfish streak which can often be grating. But he’s definitely always got got Rocky and Adrian’s best interests at heart, even if he’s terrible at expressing it. He tries to get Rocky a job at the meat packing plant, arguing with the boss when all he offers is a temp position.

Then there’s Mickey, whom Rocky had a hell of a time trying to convince to take him on in the first film. Here, Mickey tells Rocky that it will be impossible to beat Creed a second time, but later has a change of heart and decides to put his all into training for this re-match. At the time, Rocky and Adrian are having marital disputes about Rock’s boxing which lead to the athlete not giving it his all during their training. Mickey is frustrated by this, obviously. He insults Rocky, trying to embarass him into giving his all toward the fight. But when Adrian gives birth prematurely and lapses into a coma, Mickey understands why Rocky has to stay with her. He wants Rocky to prepare for the fight, but he’s not so blind that he doesn’t understand how important Adrian is to the boxer. “If you want to stay here,” he tells Rocky at the hospital, “I’ll stay with you. I’ll stay and pray.” And sure enough, where Paulie finds it too depressing to stay day after day watching over the unconscious Adrian, Mickey remains night and day with Rocky while his wife recovers. It’s so much more than their professional partnership at this point – Mickey truly cares about Rocky (and Adrian) and would rather remain by his side than go back to the gym. That’s pretty astounding.

And then, Apollo Creed. I know now that Rocky and Creed become really great friends; I feel like the first real signs of that come through in this film. In the original Rocky, Creed was big into theatrics. He came into the fight dressed as George-Washington-crossing-the-Delaware. He sought out the Italian Stallion to fight just because he thought that it was a funny name, that it would get the media’s attention. After the surprise of the first fight, though, Creed is determined to go back in the ring with Rocky. He doesn’t care about the publicity that would come from it – all he wants to do is prove that he is better. His love of the game, his need to prove himself in the same way that Rocky has this need to prove himself, that is what drives him to humiliate Rocky into returning. Creed’s advisors warn him, “You do know that you’re going to look like the bad guy?” The champ doesn’t care. He’s not interested in public relations now: he just wants the personal satisfaction of knowing he can do it.

With that said, the final fight is extremely respectful of the characters. When I first watched the movie, I didn’t care about the fight much at all. I couldn’t see the drama beneath it because I didn’t really understand the rules. I thought that the point was only in who won. It’s so much more than that. A boxing match can go up to 15 rounds, unless there is a knock-out first (one of the boxers staying down longer than 10 seconds). It was a challenge for Rocky in the first movie to face Creed, but he was proud of himself for “going the distance”, that is, facing the champ for all fifteen rounds. Even though Rocky wasn’t declared the winner of the original match, he came out with his dignity nonetheless because he made it to the end.

Because there is no bad guy, because Creed can be as likeable a character as Rocky is, the second match required the same respect. So the two contenders both have times when they seem to be on top. They beat each other up bad because they are both in peak physical condition. They go round after round and they reach the fifteenth and final round when they punch each other out simultaneously. They both scramble to get up off the ground before the 10 seconds are up, and Rocky just happens to be the one who makes it to his feet in time. It’s not that he demolished Creed and left him to wallow in defeat. The two boxers were equally matched, but Rocky was able to get to his feet. Then the first person he thanked after the fight was Apollo Creed for the chance to even be there. Knowing now how their friendship progresses, the way this fight is handled is just beautiful.

At the end of the movie, Rocky holds up the championship belt and yells to the television cameras because he knows that Adrian is watching. “I did it!” he screams, elated. This parallels nicely with a remarkably touching scene earlier in the film after he and his wife find out that they are going to have a child. They walk through the park, talking about which one of them their son or daughter would be most like, playfully arguing over which one of them is the better person. They stop. Rocky looks Adrian in the eyes, kisses her forehead. “Yo Adrian,” Rocky says, “We did it. Didn’t we?” They’re married, they’re about to have a child. They’re happy and together and that’s what matters. In a much more personal way, at this point, Rocky and Adrian have won.

Rocky II is just an absolutely stunning film. I love it.

No Responses to “Rocky II”