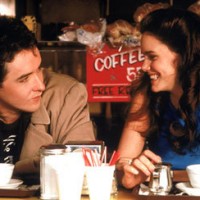 There are so many wonderful moments in Cameron Crowe’s fantastic Say Anything that it’s hard to choose just one to illustrate the movie’s overwhelming power. This is the best romantic film that I’ve seen to date, and one of the few films that shows a blossoming relationship in a real and honest way. Where most other films would show a montage of the teenage lovers smiling and talking on the telephone to imply the characters’ compatibility with one another, Say Anything actually lets us listen in on their conversation.

I’ve watched the movie a dozen times and it breaks my heart every time. There’s just so much that is perfect that I’m tempted to just quote lines and scenes at you. It’s the story of three people. There is Diane Court (Ione Skye), a beautiful girl who has been unfortunately left out of all of the parties that normal high school kids go to because she was pushed into school work by her father. Not that she is resentful or hostile to him. On the contrary, her father Jim Court (Mahoney) is her best friend. Where other movies would exhibit a father who is more stereotypical in being mean or overbearing, Crowe’s film crafts a charming and human character – a man with flaws, sure, but with a deep love for his daughter and the deep need for her to be happy.

The third character is Lloyd Dobler (Cusack), a so-so student who has graduated with high school with no real plans for the future. He’s interested in kick-boxing, but is unsure of the longevity of a career in the new sport. He knows what he doesn’t want to do, but doesn’t think that formulating some sort of career plan will aid him in any way. So, when the girl of his dreams mercifully agrees to go out with him, Lloyd decides that what he really wants to do is just hang out with Diane Court.

Lloyd’s relationship with the Courts is what makes the movie such a treat. Of course the growing dymanic between Lloyd and Diane is magnificent. They don’t dive into a romantic relationship: much as in real life, neither one is really sure when it’s okay to move the relationship to the next level. Watch as Lloyd and Diane stand next to one another in the nursing home. Diane starts to put her hand on Lloyd’s back, then quickly draws it away sensing that they were not at that point in their relationship yet. Or how about the way that Lloyd nervously taps his feet and smiles, watching Diane give her valedictorian speech before they had ever truly talked. It’s these little things, so genuine, which makes the movie a wonder. And then when their romance really does begin, the care with which Crowe handles its growth is astounding. There’s a beautiful love scene, a moment which doesn’t focus on the fact that they just had sex, but instead on the ecstatic fright that comes with being that intimate with somebody that you love and never wanting to let them go. In your eyes, I am complete.

But Lloyd’s relationship with Jim Court is equally incredible. Lloyd treats Mr. Court with the utmost respect – he’s more well-behaved than most other boys his age. Diane’s father is amused at first with the boy, but grows increasingly frustrated with him when he begins to sense that he is a bad influence on his daughter. It’s not hard to imagine how he might get that impression; Court has been grooming his daughter in her education for her entire life and here this boy is making her lose sight of that, and later threatening to take her away entirely. There are some times when Jim Court loses his temper, but Lloyd remains consistently polite. It’s understandable that Diane’s father does not see that Lloyd’s devotion to Diane is just as strong and true as his is.

What I love about this film is how strongly and easily it elicits these powerful emotions. The love of Lloyd and Diane feels so real that it hurts to think that they will be separated at the end of the summer when she must leave for school in London. Just watching them interact makes my heart ache because their love is so honest and this movie allows that to be shown on screen. Music does not overpower the scenes – sometimes there will be no sound but the characters on screen and those times it is easy to forget that you are watching a movie. It’s almost like watching an actual couple experiencing a new love for the first time, new pains for the first time. The movements of their relationship does not seem to be the product of a narrative structure (though it is, and a meticulously crafted one at that), but instead feels like the natural and fluid movements of a true to life scenario.

Say Anything is just an absolutely stunning, phenomenal film. Don’t make the mistake of missing it.