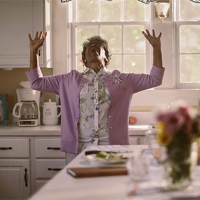 It’s no secret I’m hard on Christian movies. I seek them out primarily for laughs, and indeed I found much to laugh at in Alex Kendrick’s Flywheel and Facing the Giants when I found them so long ago. Despite finding those movies laughable, though, I loved them truly and fiercely. When the Kirk Cameron starring Fireproof was released, I saw all the in-jokes and knew they were there for me—for true fans of Kendricks’ films, the ones who had been there from the beginning. With each successive film, Kendrick had a larger budget but he also seemed to be growing as a filmmaker and as an actor. Much as with Nicolas Cage, I got into these movies because I thought they were terrible, but I felt it might be possible that I could begin seeing Kendrick doing masterful work.

Of course, the danger of becoming a successful Christian filmmaker is losing that spark of naivete and earnestness that makes this genre so thrilling in the first place. It’s easy to fall into the trap of bland schmaltz (see Letters to God as an example) and failing to challenge yourself or your audience. Kendrick’s last film, Courageous, came very close. It’s the only one of the filmmaker’s titles that I’ve never felt compelled to re-watch. Nevertheless, I felt that that movie showed Kendrick growing in his filmmaking prowess; it ended with a powerful, rousing speech, and included many technically stunning sequences (e.g. a car chase scene early in the film). In my review for Courageous, I wrote: ” I remain impressed by the strides that Kendrick and company are making. Could Alex Kendrick eventually make a four-star Christian film?”

So now we have War Room, and the answer to my question seems to be no. Despite breaking away from Sherwood Pictures to open his own production company, Kendrick Brothers, literally no risks or inventiveness come into play for War Room. Instead of showing ever more growth as a filmmaker, Alex Kendrick seems to have slid backward. The movie plays like a lazy, by-the-numbers parody of what an Alex Kendrick film is typically like; in fact, there were a number of scenes that feel as if they were lifted directly from his previous movies. Take, for instance, the montage of Liz (Priscilla Shirer) transcribing passages from the Bible, which seems to be taken directly from Facing the Giants. Then there’s Miss Clara’s (Karen Abercrombie) impassioned speech at the end of the movie calling on “prayer warriors” to rise up; it’s the end of Courageous, but done half as well. Of course there’s the painful stabs at humor, the pause for laughter accentuated by the nearly empty theater in which I saw the movie; a bizarre running gag about Liz’s feet smelling bad seems to mirror a similar there’s-a-bad-smell-in-the-house running joke from Facing the Giants, but again, the pay-off here is so much less.

War Room isn’t a movie about police officers, so there are no car chase sequences. Instead, it is about a real estate agent, Liz, whose marriage to her husband Tony (T.C. Stallings) is failing because their respective careers have kept them from developing it. In addition, Tony is absurdly short-tempered without any real explanation why. His first real scene in the movie has him coming home from a weekend away and immediately laying into Liz for transferring money from their joint savings account to checking. Where is this hostility coming from? No answer is really given; Kendrick leaves all of his characters flatter than a pancake. Their lives are entirely lived in dialogue for the movie, without any shading or dimensions at all. Copying a scene from Flywheel, Kendrick has Liz overhear her daughter say to a friend, flat-out, “I wish I could live with your family. My parents don’t get along.” It’s so blatant and boring. So many lines of dialogue were easy to finish for the characters because of how hackneyed they were.

Miss Clara, whose wild gesticulations and exaggerated vocal patterns make her seem like an obnoxious caricature, takes Liz under her wing and encourages her to turn her closet into the titular “war room”, a place to pray that her husband isn’t having sex with other women while he’s out of town. There’s plenty to say about the weird misogyny of the whole conceit, as many women in the movie repeatedly refer to the virtue of submission to their husbands, but I guess, I don’t know, I’m just more freaked out by the idea of prayer in general? Or rather, the suggestion that Satan is a literal being bothering himself with making your upper-class marriage unhappy. When Liz posts written notes on the walls of her closet reminding herself that the devil is more afraid of us than we are of him, it’s unsettling—it seems like something a serial killer might do. When she later wanders around her house and onto her back porch screaming at Satan, as if he were really there, it’s bone-chilling. I mean, she is literally yelling, “Where are you?!” Like she expects a reply.

The “war room” conceit is unable to sustain an entire movie, even with a pointless attempted mugging scene thrown in. Incidentally, Miss Clara thwarts the mugger by refusing to give him her purse and telling him to put his knife away, “in Jesus’ name.” When later being interviewed by the police, she recounts what she said and tells the officer that he had better put that statement in his report, because Jesus is so often left out. Of police reports? Because there is only so much dancing around the point that one can do, the movie tidily resolves Liz and Tony’s marriage problems, but then inexplicably dovetails into a totally new subplot about Tony’s having stolen drugs from the pharmaceutical company he works for. Having a renewed faith in Jesus, he now feels bad about the $19,000 he had made by selling these prescription drugs illegally. This is never alluded earlier in the film, it literally appears out of thin air to pad out the movie. Tony feels compelled to confess his misdeeds to his boss (played by Kendrick Himself), who has to decide whether to have Tony prosecuted (which would result in years in prison) or to believe that he is sincerely repentant and let him slide this time.

This should be obvious enough that it’s not really a spoiler, but Tony’s boss decides that he would not be willing to “take responsibility” for his mistakes unless he was sincere about turning his life around. Isn’t it possible that Tony came clean about his misdeeds in hopes that he wouldn’t have to take responsibility for them? You know, like he ultimately doesn’t because he’s conveniently forgiven?

This subplot quickly wraps up and the movie finally moves on to a Double Dutch jump-rope championship, which at least has some connection to the movie we’ve been watching because Liz and Tony’s daughter has been shown to be on a Double Dutch team. Do those exist? Do Double Dutch championships exist? This is supposedly the Double Dutch city finals, but the stands are packed like it’s a national event, with fans cheering continuously. Once again, the entire sequence just seems like an excuse to pad out the run time, strongly reminiscent of the break-dance party that capped Darren Doane’s Kirk Cameron’s Saving Christmas. We watch groups of people we’ve never seen before doing jump-rope tricks for several minutes, until finally we see Tony and his daughter do their own mediocre jump-roping at the end. Strangely, although Liz has ostensibly been the main character for the majority of the film, she is literally sidelined after her marriage problems have been resolved and Tony becomes the primary character. Liz is the one who has a tearful conversation with her daughter about how she doesn’t know anything about her life, but Tony is the one who gets to revel in applause and the strength of his relationship with his child at the end.

In all, I’m disappointed. I know I got into Alex Kendrick’s movies because I thought they were terrible, but this is terrible. It’s not funny, it’s just sad. It feels like he’s barely even trying, like Kendrick has lost his passion for filmmaking. I can’t say I blame him. After seeing the worthless God’s Not Dead hit the jackpot, it’s got to feel like putting in any effort at all is a waste of time. Here’s hoping that Kendrick gets a shot of adrenaline in him before his next movie, but I’m not holding my breath.