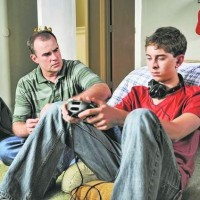 Director Alex Kendrick and the crew of Sherwood Baptist have come so far since I first saw their debut Flywheel on public access television. That movie was made on a budget of less than $20,000. By comparison, their newest film grossed nearly $16 million in theaters in its first week alone. Who would have thought, seeing the mismatched camerawork and shoddy sound design of that first outing, that the group would eventually be starting a film with an adrenaline-pumping action sequence which has a police officer clinging to a stolen SUV being driven at top speeds down the highway? It would be – yes –  inconceivable.

And yet here we are, and Courageous does indeed begin in just such a manner, before settling in for a much lower-key story about a family which must deal with personal tragedy while its patriarch, Adam (played by Kendrick himself), must learn how to be a better father and man. Yes, it’s a Christian movie made by a church, and it does have its share of preaching and unbelievable divine intervention – though luckily nothing as absurd as the wind changing direction to allow a teenager to kick an extra-long field goal (see Facing the Giants). But beyond that, the film surprises by having a good sense of dramatic tension – even if it is sometimes rather contrived – and by selling the characters in a way that makes them relateable and realistic. I began watching Kendrick’s films (before any of you, I might add) first and foremost because I found them laughable. It’s been a pleasure, then, to find that there’s been a real growth between pictures for the filmmakers themselves. Of course a lot of it is by virtue of a steadily increasing budget. When there’s a dream sequence and an over-head crane shot in Courageous, it’s as much because the filmmakers can do that now as it is that they’ve become more comfortable with the process.

So there are several action sequences here, and they mostly work. The camera jumps around shakily in a crude facsimile of a Paul Greengrass film, but it doesn’t feel like theft so much as homage. The finale involves our hero Adam Mitchell giving a speech to his mega-church’s congregation, the music rising and his tone becoming more insistent as he asks that powerful question, “Where are you, men of courage?” It booms to a close in a fashion that a friend immediately likened to The Dark Knight. But damned if it doesn’t work. Though there’s a religious bent to his speech and a hint of homophobia, the scene is contained remarkably well. It builds gradually until it finally slams down, and that made it kind of awesome to me. But the increased sensitivity to the demands of the plot are not only found in larger-than-life moments like these. When Mexican construction worker Javier has to return to his wife and children after being laid off of his job, the pain on his face and the unthinking anger that his wife expresses, they’re great. Even more exciting for me was Kendrick’s performance as his family experiences its own tragedy. Where his stilted sobs were humorous in Facing the Giants, here it’s surprisingly genuine. The man wakes up in the middle of the night, crying, and his wife can do nothing but cry with him – that kind of stuff is amazing to me, and certainly not the level of emotion that I’ve come to expect from Christian cinema. Because here’s the thing: it’s sort of subtle. Instead of a miracle appearing to show Adam that what he thought was awful is actually great (like selling hundreds of used cars in a single business day), he simply learns to appreciate what he has. That’s a great concept, one that’s rare in a genre which deals primarily in gifts from Heaven raining down for those whom the Lord smiles upon.

Which is not to say that Courageous is totally absent those groaner moments. Javier’s troubles are resolved miraculously, partially by the meddling of some seriously sadistic businessmen. Another character connects with an estranged family member on the basis that he found Jesus, a too easy resolution for a deeply ingrained rift. The movie feels obligated to deal in broad moral tales, so its characters don’t only muddle through the bad times, they are rewarded for the effort. Who’s going to buy the cross-promotional book and action figures without feeling that there’s something in it for them aside from just self-satisfaction? God’s gotta give me a promotion, win me a trophy or something. The Kendricks have been slowly weaning themselves off of this formula, but they’ve got a ways left to go. Still, it’s moving to see a scene where Adam visits a friend who wound up on the wrong side of the law and tells the man that they’re still friends. It’s just a shame that they couldn’t end the scene with Adam telling his friend that he loves him because a) they’d already made a stupid running gag out of Adam accidentally professing love to his boss, and b) ew! icky gay!

The film is a bit over-long at more than two hours, and though it has a pretty good grasp on individual scenes it does have less control over its various B-stories. The central “Resolution” conceit feels forced, hardly the defining document that “The Love Dare” was in their breakthrough Fireproof. It does help the film to organize its themes, detail its points, but I think that was accomplished with a lot more grace in the final speech and in the characters’ interactions with their families. Yeah, there are choices like this which don’t work – along with practically every intentionally comedic scene and the heartstring-yanking score which accompanies the more ’emotional’ moments. But I’m not sure there’s anything so ridiculous as Kirk Cameron beating his computer with a baseball bat because the Devil made him look at porn (see Fireproof). On the whole, Courageous is a lot more even-keeled, a lot less wild. I would have preferred more in-joke references for the fans, though.

When I reviewed Kendrick’s last film, prior to creating this site, I gave it a high star rating but noted that the rating wasn’t really accurate, it mostly expressed my surprise at the strides that the filmmakers had made. I suspect that it will be hard for them to break free from the traditional tropes of Christian cinema, but I’m excited to find out where they may go next. I remain impressed by the strides that Kendrick and company are making.

Could Alex Kendrick eventually make a four-star Christian film? It remains to be seen. I guess we’ll just have to have faith.