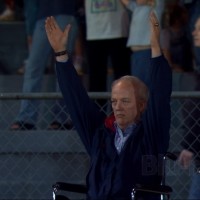 While it’s true that the seeing the Kendrick brothers’ first, shaky work Flywheel on public access television was what ignited my bizarre love for Christian cinema, it didn’t really hit overdrive until I saw their 2006 follow-up Facing the Giants. There was a time in my life when I’m pretty sure I was literally watching the movie on a weekly basis; a time when I probably could have recited almost the entirety of the film from memory; a time when my life was consumed with thoughts of Sherwood Pictures and the film’s stars. To this day, I find excuses to say “He’s a fiiiiine man and all”, “We’re number six, baby!”, and “Good hustle, Casey” with the same zeal that more traditional nerds work Star Wars quotes into their conversations. I always resented those who suggested that my love for the film was less than genuine, or that I only enjoyed it ironically. I loved the movie for its flaws and absurdities, yes, but I loved the movie with a deadly sincerity.

And I still do. I was worried that Facing the Giants would lose some its charm next to far more insane fare like C Me Dance and Suing the Devil, but after watching the movie again recently, all the same excitement came flooding back. The movie hits that sweet spot between mind-numbingly awful and too slickly produced to be funny: a perfect blend of inept acting, lame-brained plot turns, and unreal dialogue. More than that, it was made with that special ingredient that makes the best bad movies click–naive earnestness. In a broader context, looking at the smash success of director Alex Kendrick’s later films (Fireproof, Courageous), it’s easier to view Facing the Giants as a mere stepping stone for the filmmakers. I wouldn’t try to downplay Kendrick’s later success, but at the time that Facing the Giants was released, it was still a small effort made by a scrappy mega-church with local, amateur actors.

The movie follows Grant Taylor (Alex Kendrick), a football coach for Shiloh Christian School who has a losing record. He’s facing the chopping block because of his inability to win championships, but really because he loves football more than God. Similarly, because he doesn’t have an enthusiasm for Jesus at this point in his life, he is unable to conceive a child with his wife, Brooke (Shannen Fields). “How can I miss someone so much… that I ain’t never met?” she sobs in her thick Southern drawl. Did I mention that between the two, they make a total of $30K annually and can’t even afford to get their car fixed? I’m sure they’ll be able to afford to take care of a child, though. As long as they have faith!

Indeed, in the world of Facing the Giants, FAITH is a veritable supernatural force that seems to stop just short of making a crippled man walk again. Instead, it merely cures Grant’s sterility, gives him a new truck, gives him a raise, gets another football team disqualified, and changes the direction of the wind so his field-goal kicker can perform an impossible feat. No biggie. Well, to be honest, it wasn’t all the product of faith. It was also child abuse. This is most striking when, after already having practiced an entire day in the heat, Grant forces his quarterback to do the “Death Crawl” blindfolded. The Death Crawl means moving on all-fours (no knees!) across the football field with another student clinging to your back. What follows is the most uncomfortable six minutes in cinematic history, as Grant screams vaguely sexual encouragement in the kid’s blindfolded face. “That’s it! That’s it! Don’t stop! Keep going! Keep going! You give me your best – your very best! I know it hurts, but you don’t quit! Brock Kelly, you don’t quit! It’s gonna burn, but you negotiate with your body to work through it!” It’s only after Brock traverses the entirety of the football field that we learn the guy on his back weighed 20 pounds more than originally thought. Whoops? It’s presented as motivational instead of incredibly dangerous, and that’s even before considering that Grant Taylor is expressing his rediscovered faith by taking it out on high-schoolers.

But theological bullying aside, there’s a wealth of hilarious pieces to be found here. Just to name a few: the creepy disabled dad who glares at his son with a toothy smile while cutting an apple; the stereotypical black football coach (“My mama could kick it wide left and wide right!”); the mean, businessman father of one of the students with greasy slick-backed hair (my friends and I refer to him as “Evil Dad”); Grant crumpling a notice that one of his players transferred to another school and tossing it weakly at a window despite his apparent rage; Mr. Brooks, the old man who walks around the school touching kids’ lockers (allegedly not a pedophile – yeah right); the goofy grin on Grant Taylor’s face when God brings University of Georgia coach Mark Richt to give him a pep-talk; and more than anything, the inimitable Shannen Fields. It was already a stupid line when Brooke is supposed to tell her husband that he’s “made a team – the daddy team”, but when filtered through the wailing drawl of Shannen Fields, it’s something like pure magic.

In the realm of Christian cinema, Facing the Giants was my first real love. I’ve moved on, I’ve become more experienced. I’ve found new flings that are willing to go all the way (into the hysterical world of persecution complexes and echo chambers), many of which eclipse its dumbness several times over. But I’ll never lose those joyful memories, that sense of ecstasy that came from knowing even then that this movie, in its own way, is an all-time classic.