MCT Live: ‘Gone With the Wind’ 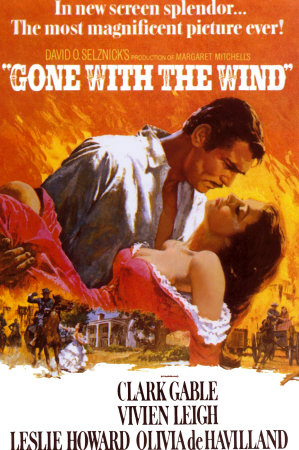 This is the Twitter feed for the first ever MCT Live (June 23rd, 2011), my live-blogging of watching one film I haven’t seen. I chose to start with Gone With the Wind as part of my goal to see every movie on the American Film Institute’s lists of “100 Years – 100 Movies”. Big thanks to everyone who played along. Would love to have you again!

MEIER_in_a_CT: Fifty minutes away from #MCTLive! I need to cook up some popcorn on the stove…

MEIER_in_a_CT: BTW, anyone else out there like me use a wok to make popcorn? If you don’t, you should – wonderful invention.

MEIER_in_a_CT: Mmmm – yup. The wok is the only way to go with home popcorn. MCT secret: It’s what I’m eating in my Twitter avy. #easteregg

MEIER_in_a_CT: The disc for #GoneWiththeWind (#GWTW) is officially in the DVD player! To those playing along: Hit ‘Play’ at 9:30 on the dot.

JohnZero83: Don’t forget to put in Pink Floyd’s “Dark Side of the Moon”!

MEIER_in_a_CT: LOL – Do I have your permission to publish your tweets for this tomorrow?*

* – (Sorry if I didn’t ask everybody in this post about permission, but I did warn you…)

JohnZero83: Sure. #randomfact Mom and I almost moved very close to the Tara plantation site, before deciding to move to Virginia Beach.

MEIER_in_a_CT: 6 minutes! Drink up the last of that energy drink!*

MEIER_in_a_CT: … to go to an overture. Shoulda seen that coming…

MEIER_in_a_CT: These actors are all still alive, right? … Right?!?*

MEIER_in_a_CT: I believe that old man did all those horse stunts like I believe Scarlett’s dress is too small.

MEIER_in_a_CT: Mammy should’ve just let her starve and be miserable.

MEIER_in_a_CT: Enter RHETT, being a creeper.

MEIER_in_a_CT: “I’ll love you, just as I do now, untill I die.” I smell foreshadowing…

(My sad attempt at LOLcats humor.)

JohnZero83: Keep a close eye out for Sam Jackson and Christopher Walken cameos.

MEIER_in_a_CT: Enter RHETT, hiding in a couch, again being a creeper.

(He looked like he’d been napping but then revealed he eavesdropped.)

MEIER_in_a_CT: BTW, no one takes a slap like the Captain. Statuesque.

MEIER_in_a_CT: Excitement and chaos. That’s just what it’s like at the Rumsfelds when war is announced.

MEIER_in_a_CT: The Captain dies of MEASLES? I take back what I said about the slap.

MEIER_in_a_CT: Yeah, I hate it when widows show up at social gatherings. Such Debbie Downers.

gttmovies: No, WEASELS! The Captain was set upon by hundreds of voracious weasels!

MEIER_in_a_CT: Snark dancing with shallow. They were made for each other.

MEIER_in_a_CT: “You should be kissed and often.” Correct past tense verb?

MEIER_in_a_CT: I got confused about which captain. Cap’n Takes-a-Smack lives on to torment O’Hara!

MEIER_in_a_CT: If TV soaps had this kind of cinematography… No, they’d still be getting canceled today.

MEIER_in_a_CT: The guy who’s leg is being removed is the best actor so far.

(I laughed hard at that.)

MEIER_in_a_CT: I think that guy saying “YAAAAY-hoooo!” was Slim Pickens riding a bomb.

MEIER_in_a_CT: I know it’s only ’39, but I wish these update captions were ‘Star Wars’ style.

MEIER_in_a_CT: What a bunch of lazy extras, all just lying around….*

MEIER_in_a_CT: Prissy’s getting the short end of the stick here. 2500 pts docked from O’Hara for striking her.

MEIER_in_a_CT: Scavenger-fire scene. I’m beginning to think #GWTW is the ‘Titanic’ of its time, & by that I mean “producer’s masterpiece.”

MEIER_in_a_CT: Rhett kisses O’Hara against her will then laughs her frustration off. What a lucky gal. #spareme

MEIER_in_a_CT: No compassion for the whipped dead horse, Scarlett? (Symbolism of her self-centeredness?)

MEIER_in_a_CT: It wasn’t racist – O’Hara didn’t believe Mammy about her dead mother because Mammy is a notorious liar. Read the book.

(I have not read the book.)

MEIER_in_a_CT: “As God as my witness, I’ll never be hungry again!” So THAT’S why it’s such a famous line – it’s pro-BBQ! #andprocarrots

MEIER_in_a_CT: And with that, we go to the intermission. I’ll let it play out, then wait 10 minutes before starting Side B.

mommameier: OK I have a twitter account now. Don’t really know how to use it, but I can read your tweets. Measles killed a lot of people

mommameier: Mammy DID lie a lot. Scarlett thought of NO ONE but herself. Comparison to Titanic is RIGHT ON.

JohnZero83: Don’t forget to sit through the credits for an Avengers teaser.

MEIER_in_a_CT: To quote @MrWordsWorth “…and ACTION!” Side B starts now.

MEIER_in_a_CT: … to “ENTR’ACTE”… They keep getting me off guard…

MEIER_in_a_CT: “SHERMAN!” That troublemaker! (Who?)

mommameier: General Sherman – Union Army. Marched through Georgia burning everything in sight. In South his name was a curse word.

(I’m actually really happy she chimed in with that.)

MEIER_in_a_CT: Welcome to Act II. Here’s a guy getting shot in the face. (Hope you didn’t confuse this showroom for ‘Wizard of Oz’)

*- (Relevant because while in high school I met Jon Jory and later in life performed in a play at the Victor Jory Theater in Actor’s Theater of Louisville.)

MEIER_in_a_CT: “Your father’s turned idiot!” I like that – “turned idiot.” I want a chance to use that.

MEIER_in_a_CT: I don’t know what makes Rhett a creeper more – his pencil-thin ‘stache or that he always smiles like he’s hiding something.

(I read somewhere that Clark Gable was secretly bisexual. This may be false – didn’t bother to fact-check.)

MEIER_in_a_CT: Scarlett marries into the Kennedy family, just like Schwarzenegger. (I’m sure that’s never been said before.)

MEIER_in_a_CT: Re: slaves “That’s different. We didn’t treat them that way.” Whatever helps you sleep at night, 1939.

MEIER_in_a_CT: Rhett’s condescension towards Scarlett holds her back from being the great woman she could be. Oh, and her deceit does too.

MEIER_in_a_CT: Wounded Ash at Belle’s brothel awkwardness capped by Rhett’s announcement of Kennedy’s death. Made it through the scene!

MEIER_in_a_CT: @AmyHorton18 This is more fun than I thought it would be! Definitely doing this again!*

MEIER_in_a_CT: Hattie flees Rhett when he says she doesn’t like him. Don’t blame her.

MEIER_in_a_CT: Don’t you hate jokers that think they’re far funnier than they actually are? Like Leno, Drew Carey, Rhett… (Me…)

MEIER_in_a_CT: Rhett and Scarlett get engaged. I would’ve thrown things at the screen if I were able to stop rolling my eyes.

(True, it is, but Rhett and Scarlett are far more unfortunately flawed characters than Hanks and Ryan in Sleepless. Besides, Scarlett’s judgment could have been influenced by the alcohol. Sorry, I don’t see their romantic relationship as one to root for.)

(At this point, Twitter had overcapacity problems on my end. Though I couldn’t actively post, I continued writing my thoughts and posted them later when everything was functional again. Unfortunately but understandably, in my online silence, the MCT Live followers signed off.)

MEIER_in_a_CT: Rhett gets mad at Scarlett about “no son” stance. Oh the pride.

MEIER_in_a_CT: Rhett’s a good provider as father, I’ll give him that…

MEIER_in_a_CT: Hattie McDaniel’s performance is a study of loyalty & commitment to a character. I mean that.

MEIER_in_a_CT: Once again, Scarlett creates awkwardness. On the plus side, Millie gets wise. #yougogirl

MEIER_in_a_CT: Rhett is going to take his daughter to see Willy Wonka tomorrow…

(This one was RT’d by an account called “iHealthyRecipes”….. I think someone’s bot is on the fritz.)

MEIER_in_a_CT: Bonnie dies the same way as Gerald! Now the drama’s in overdrive!

(Bonnie is the small Butler child.)

MEIER_in_a_CT: After Millie dies, Rhett says his “don’t give a damn” line before vamoosing for good. Off to ruin someone else’s life.

MEIER_in_a_CT: Scarlett makes another pledge: To devote her days trying to win Hubby # 3 back. Tomorrow is another day. Sad stuff.

MEIER_in_a_CT: Thank you, everyone who followed #MCTLive tonight! I’d say it was a success and enhanced my viewing! Now a big announcement…

(Date may change depending on if I decide to do this once every month or every two months. Regardless, it WILL be Singin’ in the Rain! Check back for updates.)

2 Responses to “MCT Live: ‘Gone With the Wind’”