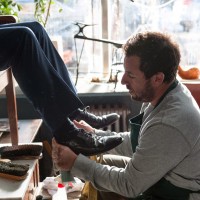 I was reluctant to see The Cobbler because the vibe I got from critics was that it was another let-down in the vein of most of Adam Sandler’s work. I think I was vaguely aware that it was made by Thomas McCarthy, director of prestige pictures such as The Station Agent and The Visitor, but that pedigree alone didn’t hype me up (in all honesty, I wasn’t very taken with either of those movies). Nevertheless, my wife suggested we watch it with the goal of riffing it, a la MST3K, and I was on board for that. What I didn’t realize I was signing up for, however, is one of the weirdest movies I’ve seen in ages. Well, the weirdest one since Invisible Enemies, anyway. Brace yourselves, because I’m going to have to include a whole host of spoilers in order to do this crazy movie justice.

The film centers on Max Simkin (Sandler), a sad-sack cobbler (we have a title!) making his way in New York. Sandler is playing this as a “serious” role, so he wears a perpetual five o’clock shadow, mopes around, and speaks in a monotone voice. The reason he’s so upset is that his father, decades ago, left Max and his mother claiming he was going to buy pears. Max has since chosen to live with his mother so that he could care for her in her advanced age and possible dementia. There is also a love interest, played by Melonie Diaz; she is a community activist who is trying to save the neighborhood from evil real estate developers who want to tear down an apartment building and throw out old Mr. Solomon, apparently the lone holdout preventing the takeover. Diaz’s character is little else than a plot device, and not even much of that.

But before that B-story can come to fruition, Max meets Leon (Method Man), a caricature of scary black people. I’m not sure whether he had gold teeth and a backward baseball cap, but he might as well have. Leon tells Max to fix his shoes – actually, the movie gets a lot of mileage out of the sole/soul symbolism (“Fix my soul!”) – and threatens to kill him if they are not fixed by 6:00 PM. Max’s stitching machine breaks, forcing him to rely on a mysterious old stitching machine that was owned by his father and has been kept untouched for years in the suspiciously non-dust-covered basement. When Leon fails to return at 6:00 PM, Max putters around for a bit before realizing that the shoes are his size (10 1/2!) and so he decides to try them on. Before I go any further, let me point out that Max–a cobbler by trade–wears scuffed New Balance sneakers. Am I wrong to think that he would wear something a touch nicer?

Anyway, putting on Leon’s shoes transforms Max into Leon. A carbon copy, to be precise, as the original Leon still exists in the world. I know this because Max realizes that the stitching machine has magic powers and uses it to turn into several other people, some of whom he accidentally runs into when out and about in New York City. At one point, he puts on a pair of shoes and becomes a dessicated corpse… except, you know, walking and talking, like a zombie. He quickly throws off the shoes, realizing that the owner of the shoes is dead. While walking around in the Big Apple, Max sees a rich man and decides he’d like to impersonate him for a while; he thus becomes Leon again to intimidate the man into giving him his shoes. Maybe it wasn’t shocking racism that led him to choose this persona to carry out the crime, but his own knowledge that Leon is a bad dude. And maybe it’s also mere coincidence that he wears the shoes of a black man to dine-and-dash at a fancy restaurant and again later to hold someone hostage. Maybe.

The movie spends a considerable amount of time with Max just playing around in other people’s skin. At one point, he becomes an attractive British DJ and sneaks into his house, where said DJ’s girlfriend is taking a shower. The movie pulls an Austin Powers, covering her naughty bits with objects in the foreground. Why have this scene at all? The woman invites Max to jump in the shower with her, a suggestion he’s quick to jump at because of course he is. I mean, who wouldn’t use this power to inconspicuously rape women? Incidentally, earlier in the film, Max wears high heeled shoes and believes he has turned into a woman. He reaches down the front of his pants, but quickly pulls his hands out again upon feeling the genitals of a man. The unstated implication of the scene is that if he had been a woman, the movie would have just shown him masturbating in front of his mirror. As far as the shower scene goes, Max realizes at the last second that he cannot take of his shoes to get in the shower and therefore makes a quick exit.

As if to prove he’s not just a racist sexual deviant, Max begins to realize that the shoes can be used for good and uses them to become his absent father. He approaches his mother, in his father’s skin, lovingly and with warm geniality in spite of the years his father has been away. The movie cuts to a music-covered montage of the two eating dinner together, laughing, and talking. Because the movie obscures their conversation, I’m not sure what they spoke about. Honestly, I cannot begin to imagine what sort of conversation they could have had. The movie suggests he just leaves at the end of the night, but it’s impossible for me to believe that this woman would be content to let her husband – who she has spent decades pining for – visit and leave without any kind of romance. Not even so much as a kiss on the lips? I know there’s the awkward fact that this isn’t really her husband, but hey, you’re the one who started down this road, The Cobbler. You brought this on yourself.

Later, Max murders a human being. He’s gone to Leon’s home to steal his watches, wearing the high-heeled shoes of the cross-dresser he had tried on previously. Leon comes home and a struggle ensues. Max, intending, I guess, to scare Leon into letting him leave, tries to remove his shoes so that he will transform back into his dowdy self. In the chaos, he instead stabs Leon in the throat with the heel of his shoe, killing him instantly. This changed everything for me. The movie tries to play it off as not that big of a deal because in part because Leon was mean… in fact, we know from an earlier scene that he beat his girlfriend (and in an unintentionally hilarious moment, he walks past a woman with a baby stroller, whistles, and says, “Hey mommy, you want another baby daddy?”). It’s also not that big of a deal because Max tries to turn himself in for the murder, but the police don’t believe his story about wearing magic shoes to break into a man’s apartment and kill him. Actually, the police believe him enough to go with him to Leon’s apartment, break down the door, and search around inside… with Max following them, unrestrained. The body is missing, so they roll their eyes and leave the building. They do not charge him with a crime for filing a false police report.

We will later find out that the murder was inexplicably concealed by his missing father, who has been hiding in plain sight all along thanks to a pair of magic shoes he’s been wearing for decades. He had to disappear because something-something-I-don’t-know, but he really always loved his wife and son and that’s what really matters. Before that, though, Max uses his new-found goodness (something about taking the life of another human being has a tendency of bringing out the best in people) to stage a complicated plan to get the evil real estate developers to leave. Part of this plan involves becoming one of the henchmen of the real estate magnate. Here is how he does it: first, he transforms into old Mr. Solomon and invites the two henchmen into his apartment, but tells them they must take off their shoes. They do some business in the apartment (I’m not quite sure what), then leave again. One of the henchmen shouts, “Hey, what about our shoes?”

The second henchman growls back: “Forget about the shoes! We’ll buy new ones.” WHAT. Am I… is this… are you for real? I’ll grant you, one has to suspend one’s disbelief for the sake of a movie sometimes, but this is something extraordinary. I can’t believe they filmed this scene without somebody objecting to its utter ludicrousness. In any case, Max successfully gets their shoes, becomes the henchmen, double-crosses the real estate billionaire, and saves the day. Incidentally, he meets the real estate mogul in a public park with her two goons hanging around being intimidating. I’m pretty sure that she wouldn’t present herself as a mob boss in public, so this is pretty absurd, too.

But here’s the real kicker: Max’s father, having finally revealed his secret identity to his son, reveals further that he has a secret underground lair that is decked out like something Bruce Wayne would have. He even has a faithful man-servant that is apparently aware of the magic shoes and unfazed by them. Furthermore, he opens a hidden door and shows Max a huge room filled with shoes (all size 10 1/2, I hope!). These are all the identities that he and his father before him stole using the magic stitching machine. Interestingly, neither man shows any interest in hiding the magic stitching machine down here. Max’s father tells him that he can see that Max knows how to use the power of the shoes now, so he’s bequeathing the collection of shoes down to him now. My wife: “Wait, aren’t most of the people who owned those shoes dead?”

But that’s not all! Max and his father are driving together into NYC as the camera pulls away, signalling that the movie is coming to an end. Yet we can still hear Max’s dad discussing with him the significance of the shoes. “You’re a Cobbler,” he intones, gravely, and tells his son that there are all kinds of Tradesmen with special powers, including Barbers and Dry Cleaners. “There’s plenty of Tradesmen like us out there. Some good, some bad, and it’s been that way for centuries.”  The movie ends briefly after this. I’m sorry, but I have to say it again: WHAT. This ridiculous movie ends with a clear attempt to set up a sequel – nay, an entire Cobbler cinematic universe – where Adam Sandler is a shape-shifting super-hero? Am I dreaming?

I went into The Cobbler thinking it would be a dumb trifle. It’s certainly dumb, but it’s also brimming with a lunacy that is strangely exciting. How did this get made? I suppose you could say it’s a bad movie, but more than that, it’s insane. Forgive the pun, but it feels as though it has been cobbled together from bits and pieces of ideas without any eye for coherence or logic. Yes, it’s bad, but it’s deliriously bad. What makes this movie so intriguing is not that it’s amateurish or cliched, although it is both, but that it goes so utterly off the rails that it almost seems like it’s blazing new trails. I cannot describe to you how badly I want to see The Cobbler 2: The Barbershop Wars now.

One Response to “The Cobbler”