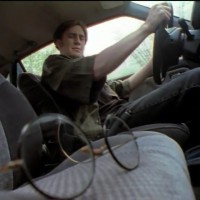 When I sat down to watch this 38-minute Christian film, it was my intention to watch it for my own entertainment and not worry about taking notes for the sake of a review. But then the movie opened with a father and son speaking in some sort of abandoned warehouse in the year 2024 A.D. “You know how I’m always telling you life isn’t neutral?” the father asks his son.

At that moment, I knew I had something incredible on my hands. I had to stop the movie to get a pen and paper because I could tell that this was going to be a movie worth remembering–indeed, it is the weirdest, funniest Christian movie I’ve seen since Kirk Cameron’s Saving Christmas.

We flash back to some indeterminate time in the past (presumably 1997, as that is when this movie was released), where the father, named Jackson, is a young adult going on a “trust walk” with a blind girl named Cindy. That is, he is wearing a blindfold as she leads him. Cindy wears dark sunglasses, as all blind people are required to, and taps the ground with a cane. At one point, she hits something soft and asks Jackson to tell her what it is. The object in question is a glasses case, inside of which are a pair of glasses. Cindy asks whether they are “dark glasses”, and when she finds they are not, tells Jackson, “You keep ’em.” What? I don’t understand why he would feel compelled to keep a pair of glasses he found on the ground. But he does.

As it turns out, the glasses have special powers… powers that only Jackson can unleash. When he puts them on, he sees demons and hears the devil leading his friends and neighbors to sin. The first time he puts the glasses on is in his science class at college. I know what you’re thinking: “Uh-oh, a science class? Let me guess… evolution is evil?” In actuality, the science professor here is not an evil evolutionist, but instead working to subtly inculcate Christianity into his students’ minds. His lecture has to do with derision that the inventor of X-Rays endured initially. Nonetheless, the professor chides, he was not “mad”–he had just seen what others had yet to see. It’s apparent that this is directly referencing Jackson’s trouble with the glasses, and more broadly the Christian persecution complex as a whole. “We’re not mad!” the movie screams.

Jackson later meets up with Cindy and their black friend Dre (yep… Dre) to describe the incredible visions he’s been seeing. Cindy and Dre are in the middle of evangelizing to a couple and sure enough, the professor’s tactics are put to use. “You don’t believe in angels and demons because you can’t see them?” Dre scoffs. “I believe in lots of things I can’t see: gravity, radio waves, x-rays…”

Cindy adds that the couple need to accept Jesus because there’s a battle going on between angels and demons. Then she realizes that it sounds as if there’s a possibility that Jesus’ side could lose, so she backtracks: “Jesus is Lord and that’s that, but there’s still a battle going on.”

Jackson interrupts the evangelizing to tell his friends the extraordinary news about the glasses. “When I ran of out class today–I mean, you guys don’t know about that (motioning to new couple), but you guys do. It was because of these (holds up glasses).” Incredible. Jackson’s friends are, as you might expect, skeptical. He points to writing on the earpiece of the glasses to bolster his tale. “It’s all right here… in plain Latin.” These are all real quotes. Unfortunately, once the Latin has been translated, it is apparent that Jackson is the only person who can use the glasses to see demons. It is here that his future self, in voice-over, tells his future-son (whose name is Trip, by the way) that it was at this time that Ally began to self-destruct. “It was like a slow-motion swan dive into a toilet.”

My initial thought was that Ally was the blind girl, because I did not know her name at the time, but as it turns out, Ally is Jackson’s sister who had never been mentioned in the movie before this moment. Ally is a few years younger than Jackson, and dresses in sort of a goth or punk style that communicates to viewers that she has fallen away from Jesus. She leaves to go to a club. Later that evening, Jackson hears the devil talking in Ally’s room about how he’s going to take her soul; incidentally, the devil attacks Jackson at this time, but runs away screaming after Jackson cries out, “Oh, Lord Jesus!” Just hearing that name, it’s like garlic to vampires. Knowing that his sister is in trouble, Jackson enlists the help of Dre, whom he convinces that the glasses are real by saying, “I know about the pornography.” The movie quickly cuts to Dre looking at a Playboy or something while lightning flashes. Dre is now totally on-board because there is absolutely no way Jackson could have guessed that he had looked at pornography without the aid of magical demon-viewing glasses.

The two rush to the club, where the music is thumping and the lights are strobing. It will be impossible to find Ally in this crowded club. But wait, suddenly Ally appears, walking blindfolded across a steel beam that runs across the ceiling of the club, above the crowd. She has a rope tied around her waist so that a spotter can catch her if she stumbles, but the guy with the rope has just accidentally dropped it. She’s in danger! Let’s just stop here for a minute so I can ask what the hell??? Is this… I mean, I admit it, I’m not exactly the type that goes out clubbing on the weekends, but I’m pretty sure I’ve never been to a club where girls are blindfolded and walk across steel beams for the amusement of the club’s patrons. Maybe it was a ’90s thing? In any case, Jackson quickly climbs up on the steel beam so he can save his sister, but the devil attacks him. Jackson makes an appeal to Jesus, and again merely saying that word sends the devil careening off into the abyss. Jackson has saved his sister! The crowd applauds and cheers, because they were seriously invested in this for some reason.

Cut to Cindy, Dre, and Jackson sitting around on his porch the next day. They are discussing the previous night’s events and how demons and angels are definitely real. They all feel repentant for their sins. “I never meant to get in so deep,” Dre says, shame-faced. I assume he means so deep into porn. Cindy, too, feels ashamed. “I never meant to be so sarcastic. I was just really angry about being blind.” So, uh, her sin was… sarcasm. It’s a good thing she’s confessing now. Suddenly, Jackson realizes that although he had saved his sister physically, he had not saved her spiritually, and he rushes in to evangelize to her. She is initially reluctant, saying that she’d done too many bad things to be forgiven by Jesus.

In 2024 A.D., Jackson is wrapping up telling this story to his son, Trip, noting that his sister “finally gave in.” Those are the words he uses. She finally gave in. He then hands the glasses to Trip, because I guess he thinks that Trip will be able to see demons through them, even though the Latin inscription very specifically states that only one person can use them. Trip then tells his father that they’d better get home because his mom would be worried. At this point, Jackson reveals that he is married to Cindy, the blind girl. The two walk off set and the camera remains, as the sound of demons growling begins to grow once more. And… that’s it. The movie ends. So, the twist ending is that Jackson married Cindy? WHO CARES? Why is the movie framed with this 2024 A.D. book-end at all? Is it a post-apocalyptic future? If so, why? If not, why was this conversation taking place in an abandoned factory?

It’s futile to ask these questions. The movie is over and you don’t need to know these things. All you need to know is that even though “sometimes it’s hard to believe in things you can’t see”, Jesus is real (or, well, demons are, mostly) just like gravity is real. Because that is clearly the only reason anybody would deny Jesus, right? Because they can’t see him? Definitely.

In all, Invisible Enemies is a riot. It’s gifted with bizarre dialogue, insane plotting, brainless religious arguments, and an apparent cluelessness about why it is set 27 years into the future. There are four credited screenwriters for this short film, and it’s still a glorious mess. I love when I watch a Christian movie and think, “This is crazy. Nobody will believe me when I tell them about this.” That’s how I know I’ve found a winner, and Invisible Enemies is pure gold.