Dawn of the Planet of the Apes 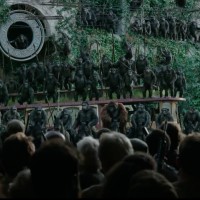 It’s been a while now since I last watched Rise of the Planet of the Apes, but I remember feeling very strongly about it. I went back to read what I had written about it and remembered that what I had found so stunning was largely the characterization of its lead ape, Caesar (Andy Serkis). He stood on the precipice of a new age as both savior and villain, and that duality fascinated me. The film did an excellent job developing his conflicting motivations and desires, and of course the motion-capture work by Serkis was superb. Caesar uses sign language, but it’s meaningless to most viewers without subtitles explaining what he’s signing; the bulk of his emotional journey is delivered through body language and facial expressions. It was a surprisingly nimble and thoughtful film for a summer blockbuster. Just reading my own review, I can recall why I felt so strongly about it at the time.

I had reservations about the follow-up, Dawn of the Planet of the Apes, as soon as I learned was being helmed by Matt Reeves. Reeves is most famous for the forgettable Godzilla-lite Cloverfield and for Let Me In, a dumbed-down American remake of an extraordinarily emotional Swedish vampire film. I felt he would likely sanitize the promise of Rise by sanding out the nuances, aiming for something with more explosions than exploration.

To some degree, I was right. What I didn’t realize, however, is that this shift in focus was exactly what the story required. At this point in the over-arching narrative, Caesar has cultivated a peaceful community of apes which he governs. The story of Dawn is not primarily about his duality as hero and villain, torn between two worlds: here, he is predominantly heroic. Maybe that’s the wrong word. What I mean is that his emotional dilemma here is not about what the just action is, but rather how to appropriately achieve it. He is no longer a child, defining himself. He is an adult—with children of his own—seeking some measure of security, not autonomy. That goal can only be made dramatic if his security is threatened.

It might seem cheap to use a third-act battle as the machinery for that disruption, but Dawn thankfully has an engaging visual style to its scenes of destruction and again has remarkable physical presences in Serkis and Toby Kebbell as Koba. The two actors, in conjunction with the special effects team, ground the events as they become increasingly outsized. Dawn doesn’t retain the moral relativism that its predecessor managed (characters are almost all categorically “good” or “bad” here), but it nevertheless manages to wring out some moving interpersonal moments. There’s a scene with Caesar and his son that nearly succeeds in its attempt to one-up the memorable bellowing, “No!” from Rise. Re-contextualizing that moment from a declaration of independence to a demonstration of dedication makes for a powerful moment.

The strength of the final leg of the film notwithstanding, it has a lot of weaknesses. As in Rise, the human characters are drawn very poorly. Caesar is supposed to find a connection in Malcolm (Jason Clarke), his son Alexander (Kodi Smit-McPhee), and Malcolm’s love interest Ellie (Keri Russell), but all of the humans exist as plot devices more than characters. Malcolm just keeps instigating confrontation to help the movie progress without gaining any depth. I was tempted to argue that Ellie is the most inconsequential character – there are only two times her skills are required and in each instance her big moment is elided entirely. At other times, she exists only for Malcolm to patronizingly pat her on the head and kiss her goodbye while he goes off to be “brave”. However, I am now realizing that Alexander’s existence is entirely unnecessary. His existence is of literally no consequence—he doesn’t even get to do something important that’s edited past as Ellie does. He could be removed from the movie entirely and it would lose nothing, save maybe for an already ineffective parallel between Malcolm and Caesar (they’re both male! they both have sons! OMG!).

The most frustrating of the human characters, however, is Carver (Kirk Acevedo): his existence epitomizes the weaknesses of the script. From the start, he’s positioned as a “bad” guy. He immediately shoots one of the apes, sneers perpetually, and does nothing but vocalize his disdain for Caesar’s society. When Malcolm, ever-instigating plot momentum, determines that he has to go into the woods to ask Caesar for permission to open a long-abandoned hydroelectric dam, he decides to take Carver along with him. Ellie, serving as audience surrogate, asks why he would do something so idiotic. Malcolm pats her on the head and brushes off her question, explaining that he has to take Carver because he is the only one who knows how to fix the dam.

Carver’s anti-ape sentiments cause friction, of course, and set up a tense moment of potential violence that the movie is probably better for… but then he’s written out of the movie. That line about Carver being the only person who knew how to fix the dam? Misdirection, apparently, because the remaining characters do just fine on their own.  It becomes clear he was brought along on the mission for the sole purpose of causing discord. I certainly don’t fault the film for having a character who causes conflict, but when it’s so transparent that he serves no other purpose except to cause conflict—and then gets unceremoniously written out of the movie after he’s fulfilled his purpose—it’s disheartening. As I’m writing this, I’m remembering there were two additional male humans who joined the expedition to the dam: as far as I know, neither had a name.  Much like Alexander, neither had any purpose in the film. In fact, when the third-act battle sequences begin, the two disappear without a word spoken. It’s during a moment of confusion, once again an attempt to distract the audience from recognizing that the film is brushing two characters under the rug.

Their existence and disappearance may be more egregious than Carver. At least he had some kind of reason for existing. These characters might as well be mirages for all they contribute to the plot or to the movie generally.

But the last third of the movie is so thrilling! There are multiple instantly iconic shots, e.g. Koba and Caesar’s son hugging in front of a blazing fire) and great action set-pieces. There’s a fight scene from swinging chains that’s just killer. As mentioned, the apes manage to convey emotion to a degree the humans utterly fail to match. Yes, in hindsight the conclusion is disappointingly clichéd, but it’s executed with a confidence and vigor that makes it easy to ignore in the moment. Isn’t that enough?

Yes and no. Shifting the focus to the way Caesar fights for what he believes in rather than why he fights is right for the movie, and consequently, a greater focus on the fight itself makes sense. It is a defensible choice and the action is done very well. But, as I suspected beforehand, this is not an intelligent or especially philosophical movie. Its attempts at thoughtfulness or “meaning” are limp. If I’m not mistaken, one character literally says of humans and apes something to the effect of: “We’re not so different after all.” Maybe that would have worked better if it was supposed to be dryly comic, but it’s said with a tone of somber reflection, like it’s supposed to be a major revelation.

Dawn of the Planet of the Apes does not achieve what its predecessor suggested the series could be. It’s a mostly mindless summer blockbuster. Make no mistake: it’s a highly enjoyable one, and it’s well-made in many respects. But it’s not the visionary work that it could have been, and it’s hard not to be somewhat let down by that.