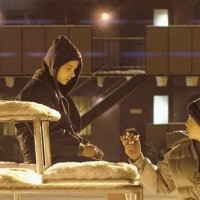 Let Me In is a pale imitation of its Swedish counterpart, Let the Right One In. That movie was a striking and subtle look at the growing friendship between two very different children, and though this American remake has the same story at its center and even replicates many shots from the original, most everything else it gets absolutely wrong – right down to the title.

First, one thing that made the original film work so well was the fact that the relationship between Oskar and Eli (here Owen and Abby) was strictly platonic. That’s part of what made the film so beautiful, and why I think that their relationship differed from the one that the girl had with her guardian Hakan. Eli was a vampire, and Hakan loved her because he feared her. When Let the Right One In was released on DVD, there was an uproar from fans of the film because the subtitles had been butchered from the theatrical version. The company that pressed the DVDs thought that a translation is a translation, but there is so much weight in the specific words chosen. When Hakan apologizes to Eli by saying “Forgive me”, it means something totally different than when the American remake’s similar character scrawls the phrase “I’m sorry”. In the first version, the subject of the sentence is the girl – she holds the power to forgive because she holds power over the man. In the second, the subject is the guardian; the hold she has over him is not as clear.

Yes, Owen and Abby become close to one another just as the characters did in the original film. But here, Owen has sex on his mind. He watches his neighbors in a moment of passion, he stares at a girl in his class as she swims in the pool, and so on. Where LTROI made it clear that Oskar could have no ulterior motives in a scene late in the movie, writer/director Matt Reeves was content to let the relationship remain one of possible romance. If I was walking into the story for the first time, I suppose I could accept that – but knowing the expertly crafted script that Let Me In is a bastardization of, it’s hard to take lightly. The romance of Abby and Owen may work, but it’s not done well, and showing old pictures of Abby with her guardian as a boy was perhaps the most self-destructive thing that Reeves could have chosen to do.

As mentioned, even the title betrays the less-than-noble intentions of the American remake. With a title like Let the Right One In, the relationship is brought to the center. It’s not a literal place, this “in”, but the abstract expression of being able to relate to somebody – neither Eli nor Oskar felt that they had anybody in their lives that they could allow into their worlds, but they found that person: the right one. In the United States, it’s Let Me In and appropriate to the title, the movie has a much stronger horror movie vibe. The soundtrack hums with deep bass thumping sounds eliciting a Jaws type tension. The title is a command, a demand. Even in the title, the original film had a softness that underlied the entire film – Americans will have no such softness. When major changes were made to the story, according to IMDb, it was because Reeves intended “to make it more accessible to a public American audience.”

I think Reeves missed the point of the movie. He thinks it’s a vampire flick. That’s why almost every time that Abby has to attack somebody, it’s shown in graphic detail. And if you thought that the cat scene in LTROI was created with poor CG effects, just wait til you see every attack scene in this film. It’s because of choices like that, I think, that even scenes that are nearly identical to ones in the original film carry much less emotional resonance than they did previously. One of the most memorable sequences in the first film shows a woman who bursts into flames. The shot is re-enacted here, but it lacks any punch. Similarly, when Abby instructs Owen to fight back against the bullies at school that terrorize him, the lines are the same but the feeling behind them is lost.

There are certainly some great things about the movie. Nearly all of the central actors – Richard Jenkins and Chloe Moretz in particular – are spectacular for their roles. And though Reeves forsakes the heart of the original film entirely, at least the atmosphere is retained. Many shots in the film are absolutely gorgeous, and there is an additional scene where Abby’s guardian hides in the back of a car in order to ensure that his liege maintains sustenance. It’s extremely tense and well-executed, but then Blue Oyster Cult starts playing on the radio in a painfully obvious bit of in-joking, and then some half-baked “Romeo & Juliet” symbolism gets thrown into the mix, and suddenly you remember…

This movie looks like Let the Right One In, and it sounds like it at times. Overall, though, Let Me In is but a shadow of the much better Swedish film. When we worried that an American remake would be at best useless, at worst an enraging fraud, we were almost right. This movie isn’t exactly terrible, but for those who have avoided the excellent original film because of some ridiculous aversion to subtitles, just know: you have let the wrong one in.