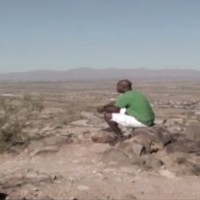 In any case, after his marriage begins to dissolve, leaving Sean to move out into a one-bedroom apartment and play video games all day, he decides he can’t take the pressures of his job anymore. He stands up on the stage and quotes one of the Christians’ favorite self-aggrandizing verses: “The fool says in his heart there is no God.” Declaring himself a fool, Sean asks why there is evil in the world if God exists, then storms out of the church. He tosses his Bible in a trash can, declaring, “There is no God!” as he walks away. The congregation is stunned. Travis, in particular, freaks out and confronts his buddy in the parking lot over the breakdown he seems to have just had. At this point, Travis says one of the most incredible lines in the film: “What were you doing talking about the fact that there is no God?” He makes it seem like this is some dirty secret the Illuminati have tasked them to keep hidden. Not ‘what are you doing claiming there is no God’, but the far more specific and apparently uncontroversial ‘what are you doing talking about the fact that there is no God’. I’m glad the movie has come to terms with this, even if Sean apparently hasn’t.

But things are about to go from bad to worse for Sean. The church board of directors (or whatever their title is) call him in to a meeting, ultimately asking him to leave his job. You’d think that it would have some connection with his outburst earlier, but in fact they question him only on his potential divorce. That’s right: they’re less concerned that he’s working in opposition to their goals (trying to hide the fact that there is no God) than they are about how it would look if their pastor was a divorcee. Priorities, man.

Nonetheless, Sean takes them up on their offer to quit and gets wildly drunk at a party hosted by the landlords of his apartment complex. It is here that he meets a woman who inexplicably listens to his slurred self-deprecation all night, then even more inexplicably stays over at his place instead of going home at the end of the night. This woman, incidentally, says every line in an incredibly sarcastic, utterly obnoxious tone of voice. She is unbearable. Maybe I should have guessed it from her extreme unlikeability, the perplexing decision to stay at a passed out stranger’s house and dig through his belongings the next morning, or the fact that here name was Serenity… but I didn’t yet comprehend what she was. It wasn’t until she showed up again at 5:00 AM telling Sean she wants to go hiking that it hit me: she’s a Manic Pixie Dream Girl. You can tell a Manic Pixie Dream Girl (MPDG) by the way she fawns over a worthless guy for absolutely no reason, and by the way she is always trying to get said guy to do CrAzY things with her, e.g. roller skating! (But we’re adults! We’re being so weird right now!) I know this is going to sound unbelievable, but her MPDG-ness extends all the way to the way she sits: at one point, Sean sits on a park bench and Serenity opts to sit on the back of the bench just to be weird.

Serenity gives Sean sage advice. For instance, with regard to his failing marriage, she suggests dating again: “Get back on the horse.” With regard to his job as a pastor, she suggests preaching again: “Get back in the saddle.” Sean didn’t ask her whether he should follow through on killing himself, but I have to assume her answer would have been: “Git along, little dogie.” Ultimately, Serenity doesn’t seem to have much of a purpose in the film. I guess she was supposed to galvanize Sean into action or something, but it’s unclear how much of Sean’s inevitable reaffirmance of his faith was caused by Serenity’s MPDG nonsense versus him just hitting bottom and realizing he needed to pick himself back up. The ambiguity of her existence notwithstanding, Serenity still ends her time in the movie by handing Travis a letter for Sean filled with “things I couldn’t say.” Travis asks her if she’s going to be okay. (Why wouldn’t she be?) She smiles wistfully, then finally answers, “Eventually… Take care of our boy for me, okay?” Huh? This character’s bizarre, supposedly sentimental exit is in no way earned or interesting.

Speaking of Travis, he falls out of Sean’s life entirely after he loses his faith and quits his job. When he meets up with Sean again, Travis tries to apologize: “It’s just really hard balancing supporting you and not condoning what’s going on.” I kind of wanted Sean to just pop that greasy bastard in the jaw at this point. What a shitty friend. Why would the writer/director give himself a role that makes him look like an insufferable twerp? I guess the movie doesn’t see it that way, because before long Sean’s practically bowing at Travis’ feet, thanking him for being a real friend. With his perpetual holier-than-thou smirk, Travis responds: “That’s what real friends do… friendship without expectations.” Go to Hell, Travis, you worthless slimebag.

There’s more to say, of course. There’s an amazing extended sequence near the end where the camera becomes shaky and hand-held, one guy holding it (no doubt Jeff Harris himself) while scrambling over rocks and zooming in and out on our hero. It’s remarkably similar to the final leg of The Player’s Manual. And then there’s the typically despicable resolution to Sean’s problem, wherein his depression gets so bad that he’s put on suicide watch… and he then turns back to the Bible. Yes, the Bible is only compelling when you’ve sunk so low that you’re a danger to yourself and others, at the point where any comfort at all is preferable to the darkness. At least you’re selling it honestly, Jeff.

I’m obviously drawing attention to the particularly ridiculous and/or irritating elements of the film, but honestly for the most part it’s a relatively tame example of its genre. The camerawork is often pretty jerky, but the sound doesn’t cut in and out and the actors are adequate, for the most part. As ever, it would have been nice to see Sean’s struggle through a little more of a realistic lens, i.e. one that doesn’t involve an MPDG, one that involves him cutting that asshole Travis out of his life completely, one that has him finding his faith anew instead of using it as a last-ditch effort to keep his head above water. I know it’s a lot to ask.