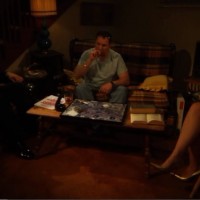 There are currently zero reviews on RottenTomatoes of O.B.A.M. Nude, the masturbatory, right-wing, low-budget waste of time from Kenneth DelVecchio. It’s a little bit unfair to lay the blame for the movie all at the feet of DelVecchio just because he wrote AND stars in the film – after all, there are lots of people in the credits who contributed to this garbage. But then, I’m sure there are plenty of people who contributed to the Nazi regime, but that doesn’t stop us from laying the blame primarily on Adolf Hitler. I know it’s absurd and nasty to make Hitler comparisons, but if O.B.A.M. Nude can make the same comparison with Barack Obama, then certainly I’m free to follow suit. So, to repeat: Kenneth DelVecchio is exactly the same as Hitler. They may very well be one and the same person.

This movie, which is excerpted at length in the better received DelVecchio project The Life Zone (about three women who are abducted to prevent them from getting abortions), takes places at Occidental College in 1981. DelVecchio–a tubby white guy–plays Barack Obama; or rather, he plays a transparent “version” of Obama as a critique of the President. We meet the character snorting cocaine off of a coffee table alone in a small, dimly lit apartment. Actually, the entirety of the film takes place on this one poorly lit set. When DelVecchio looks up from his drugs, he finds two people in the room with him… a fact which he largely takes in stride. There’s no hiding that these people are the devil and an angel, and each wants DelVecchio to follow their path in life. When the devil is able to produce two women in skimpy bikinis willing to have sex with DelVecchio (clearly this is a work of fiction), the choice between the two paths is easy to see. DelVecchio–and by extension Barack Obama– is working with the devil.

Does DelVecchio really believe that President Obama is working with Satan, like, literally? Later in the film, as mentioned above, it is asserted through suggestion that Obama is the same as Hitler because Donald Trump made a big deal about Hitler’s birth certificate, too. That is why we hate Hitler, after all: because people might have questioned where he was born. Well, that and because he had a volatile relationship with his father. Hitler never did anything worse than have daddy issues, so comparing Obama to Hitler is totally justified because they’re sooooooo similar. Later still, the devil refers to DelVecchio-bama as the Anti-Christ. Again, I’m left wondering whether this is a genuine, insane belief or if it’s merely incendiary rhetoric for its own sake. At this point, the devil offers DelVecchio a gay sex slave, for some reason, but he declines. I guess not even DelVecchio is comfortable accusing Obama of being gay. Good to know there’s some kind of a limit to the ridiculous accusations.

The devil tells DelVecchio that he will make him President, but that he must know how to respond to all the pressing political issues of the day in order to be a socialist dictator. DelVecchio bellows, “I want to rule with the iron fist of communism!” Definitely. Well, in order to become a great communist dictator, it’s important to know how to be an evil liberal on topics like abortion, global warming, affirmative action, and government bail-outs. So the rest of the film becomes little more than a conversation between these two characters about why, for instance, the world is going to live forever and it’s THE WORK OF THE DEVIL to worry about melting polar icecaps. I’ll return to that momentarily. The conversations between DelVecchio and the Delvil are interspersed with weird, fake man-on-the-street interviews with people discussing their thoughts on the various subjects. Some of these responses are incredible, suggesting the kind of overall mindset that would be receptive to a movie like O.B.A.M. Nude.

The Devil, while serving deviled eggs to DelVecchio, because, um, duh, tells his new minion that it’s important to keep the MASS MURDER of abortion going, so they do a thought exercise where one plays the “thoughtless, self-interested baby-killer” and the other plays the saintly anti-abortion activist. I won’t go into the specifics since I discussed how dumb their argument is in my review for The Life Zone, but it’s worth noting that the devil laughs that one great evil liberal tactic to use is to obfuscate the topic by talking about “women’s rights”. It’s telling that the rights of women are considered a distraction in the abortion debate to these idiots. That’s the next evil liberal tactic provided by the devil, by the way: “If all else fails, call your adversaries stupid.” HEY, KENNETH DELVECCHIO, YOU’RE STUPID. Damn, that really is effective! Thanks, Satan! I love the idea that DelVecchio is being called stupid so often that he’s decided that it’s some tactic to discredit him instead of an honest appraisal of his state of mind.

Speaking of which, what does DelVecchio have to say about global warming? His opinion on the subject seems to be in line with many of the people “interviewed” on the street, and that comes down to the idea that a change in climate is normal (“that’s what ‘climate’ means,” one guy asserts) and therefore there’s nothing to worry about. Even if there is a problem, humans certainly aren’t the reason for it. We exhale carbon dioxide every time we breathe, which somehow means that cars don’t do anything? I guess he’s saying our breath alone would destroy the world if global warming were real? Not really clear. Actually, the devil says that volcanoes have been erupting for years… if they haven’t destroyed the ozone layer, then humans can’t. Brilliant. In fact, conservation efforts are just more distraction from real problems, and it’s cultivating a new religion that worships the Earth. Caring about the Earth is evil! If the masses don’t buy it, DelVecchio-bama will just get “stupid, liberal special interests groups” to sign on… like, um, the scientific community. The movie never comes out and says “science is evil”, but I have to assume it’s implied.

Maybe you’re not finding this offensive enough, so let’s hear what DelVecchio has to say about affirmative action. In the “interviews”, a woman sadly says that she’s seen so many Caucasians losing jobs to unqualified minorities. Another man describes affirmative action as ‘reverse racism’. Affirmative action accomplishes the sinister goal of “taking from the qualified and giving to the needy”. DelVecchio grins deviously, realizing that the more he “caters” to the poor and oppressed, the easier his rise to power will become. Again, gotta love the upside-down world where the poor and oppressed are the ones who are really in control of the country. In a moment that makes me want to scream because I know that people like this actually exist, a woman being “interviewed” on the street seriously asks why people would ever try to do well under affirmative action, since they’re guaranteed a job just for being a minority. Absolutely. Just like the people on welfare who are refusing to work so they can live the high life on public money, minorities who are handed the keys to company cars without even trying are definitely real and not just made-up Republican bullshit. Not sure if I’ve said it recently, but KENNETH DELVECCHIO, YOU ARESTUPID.

But here’s where we get to the heart of Obama’s reign of terror: the economy. The man-on-the-street interviewees are getting nostalgic for the Great Depression. “When businesses went under during the Depression, it made room for new businesses,” they say, matter of factly. Yeah, and nuclear war makes room for new nations. DelVecchio-bama’s plan for the economy is this: “I’m gonna tax these billionaires’ asses off!” The devil is behind this plan one hundred percent. “Tax them to death!” he screams. This has to be a joke, right? I’ve been misinterpreting the movie thus far, haven’t I? This is actually a parody of Republican thought rather than a lame so-called satire of the Obama presidency… right? No? You mean that this is–gulp–actual Republican talk? You mean that when DelVecchio and the devil assert that bailing out the American automobile industry and banks means that the United States is ALREADY a Communist nation… they’re being serious? And that when the two later go on a diatribe about healthcare (“We’ll fool people into thinking healthcare is a right!”), they’re not kidding?

At the very end of the movie, after DelVecchio and the devil have finished detailing their plan for political dominance, DelVecchio-bama proclaims: “God damn America!” The devil puts his hand on the shoulder of his apprentice: “No son, you will damn America.” Beautiful. It’s the perfect cap to a mess of elitist, sexist, racist, borderline-anarchist blabber. There was no making O.B.A.M. Nude a good movie, so the only option was to lean hard into this insane persecution complex in the final moments; I can’t imagine how the movie could have done it any better. Unless DelVecchio-bama had broken the fourth wall, cackling at the viewer, “I’m coming to eat your children!” Missed opportunity, Ken.