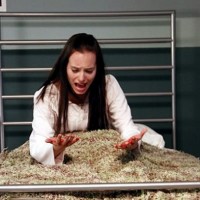 At the beginning of The Life Zone, three women awaken to find themselves in a dimly lit dungeon outfitted with little more than their three beds and a couch stationed in front of a bank of television sets. They’ve been drugged and kidnapped, their captor an older man sitting in shadows appearing on one of the television screens. “You have all committed a terrible sin,” he intones gravely, insisting that this is the reason that they have been robbed of their liberty and locked in what amounts to a dirty cell with one another. It’s not long before the women begin to remember where they were last: each on the operating table preparing to receive an abortion. “Ready to commit murder,” corrects Dr. Wise, the woman who works for their kidnapper. They were carted away before going through with the deed, and now will be held in detention for the next seven months until they give birth to their children… simultaneously. It’s like a version of Saw or The Human Centipede for the pro-life set, an oddly uncompelling offering from “Justice for All Productions”.

Essentially the movie is an extended conversation about the morality of abortion, purporting to show different views on the emotionally charged issue and ultimately coming to the sensible conclusion that abortion isobviously always evil and anybody who feels otherwise should go to Hell. The conversation is held by laughably bad actors – watch one of the women wake up and immediately start screaming at one of her sleeping cellmates, “WHO ARE YOU?” To be fair, the lines they’re given are often ridiculous as well. Dr. Wise sneers at one of the women for being a lawyer, derisively asking whether she graduated at the top of her class. “I was number one, yes,” the woman responds. Wise goes on to suggest that the woman was also prom queen in high school, to which the lawyer questions the question’s relevance. Wise scoffs: “Oh, that’s a legal term, isn’t it?” No, sorry, that’s just a regular word. Considering that you’re in a movie that forces kidnapped women to watch clips of creepy-crawly insects, people shooting drugs, Nazis, vampires, tornadoes, and.. um.. Africans in an effort to make a connection with abortion, it’s no surprise that words with multiple syllables are assumed to be some kind of fancy Satanic book-learnin’.

The women are later forced to watch an earlier short film written by Ken Del Vecchio, the same man who wrote this movie. That short is called O.B.A.M. Nude and is a bizarre propaganda piece which suggests that Barack Obama was trained by Lucifer on how to rule the United States in Communist tyranny. Del Vecchio himself plays the Obama stand-in, while the devil laughs maliciously about his heinous plan to become a community organizer! Bwahahaha! The Life Zone excerpts one segment from the short, however, when Satan and “O.B.A.M.” have a conversation about abortion which pits the pro-choicer against this unassailable logic: it doesn’t make sense that a collection of cells could magically change into a person overnight. The way the characters all turn up their nose while using the phrase “magically change” demeaningly is kind of hilarious given that in the same breath they’re able to say without blinking that there’s a magic God in the sky, but that’s not really important to this discussion.

“Would it be okay to kill a baby one day before it was born?” O.B.A.M. asks Satan, who is playing the pro-choice opponent. Satan says no, of course not. Well, how about a week before it was to be born? Again, Satan says no. How about a month before it was to be born? For a third time, Satan says no. When Satan provides an estimate of three months from birth for abortion to be morally acceptable, O.B.A.M. jumps on this – ah-ha! So you’re saying that there’s a magical change once a baby has been gestating for six months that makes a baby a “person” which was not there a day prior? The devil is defeated. The movie makes sure not to investigate the extent of this line of reasoning any further, but please allow me to continue the conversation because the exact same line of questioning could be easily used to topple Del Vecchio’s own argument. If an unborn baby is a “person” at six months, is it a person the day prior? Of course, the answer would be yes. A week prior? Yes. We go back, we go back, we go back… how far? Does a “person” exist the day after an egg has been inseminated? Is a single cell that has just divided into two a “person” in the same way that you or I are? I have to believe that most would respond to this question in the negative. Therefore, there is a point where a collection of cells becomes a “person”. This is where the conversation might rightly be centered, because declaring a baby moments from birth to be not a person is clearly illogical and declaring two cells the same as an infant is the same.

As The Life Zone is a propaganda film, it’s not interested in having a sincere discussion about a very heavy topic, choosing instead to demonize those who dare question its tenets. It’s a minor spoiler, but at the end of the film all three of the women do end up having their babies – including one woman who was never convinced by their kidnappers’ brainwashing and as a result refuses to see the child once it has been born. I couldn’t help but laugh. For all the time the movie spends talking up the immorality of abortion, it doesn’t bother with discussing the need to actually take care of the child once it is born. If the mother ignores the child, it’s no biggie so long as it got to starve to death outside of the womb rather than being aborted two months into gestation. The movie doesn’t address this new responsibility mandated by giving birth to an unwanted child because it has no interest in approaching the question from an honest, critical perspective.

Neither entertaining nor enlightening, The Life Zone is a waste of time.

(P.S. Incidentally, the movie does provide a rather striking moral quandary without intending to do so. What is the moral duty of a woman who is kidnapped by psychopaths and forced to carry an unwanted child to term? What if she escapes with days left in the pregnancy, for instance? Is it a moral imperative for her to birth the child and take care of it for the next several years because its “personhood” makes its life inherently valuable, even though the child was generated as a form of torture? These are extremely difficult and emotionally volatile questions, when handled with seriousness. The Life Zone is just not a serious movie.)