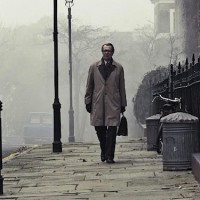 I don’t really have any idea what transpired in Tinker Tailor Soldier Spy, director Tomas Alfredson’s first feature film since his critically acclaimed Let the Right One In. That film was awarded the coveted five star grade by this critic, and believe me that’s not something I take lightly. So it was with bated breath that I awaited Alfredson’s next work, and though the film has a stunning style and lush atmosphere, its plot is so labyrinthine (or possibly just poorly packaged) so as to be nearly indecipherable on a first viewing. It’s been suggested to me that a second viewing would help illuminate the murky crevices of the plot, but there’s a difference between a movie merely benefiting from multiple viewings versus demanding them. The latter tends to make me uneasy; if the story is too dense to follow initially, it seems a failure on the part of the filmmakers.

When it comes to films which are in the good graces of the critical community, it is often tempting to blame oneself if the appeal is indiscernible. I’m just not smart enough to get it, one is apt to think. I might be tempted to take this tack if it weren’t for the fact that both the A.V. Club and Roger Ebert expressed reservations about the film similar to those I bring forth currently:

Alfredson and screenwriters Bridget O’Connor and Peter Straughan compress le Carré’s labyrinthine plot, but don’t simplify it. Its dealings and double-dealings will probably be better understood on a second viewing, but it only takes one to appreciate Tinker Tailor Soldier Spy as a film.
-Keith Phipps, A.V. Club

I confess I was confused some of the time and lost at other times; the viewer needs to hold in mind a large number of characters, a larger number of events and an infinite number of possibilities. More ordinary spy movies provide helpful scenes in which characters brief each other as a device to keep the audience oriented. I have every confidence that in this film, every piece of information is there and flawlessly meshes, but I can’t say so for sure…I became increasingly aware that I didn’t always follow all the allusions and connections.
-Roger Ebert

Neither of those reviews come right out and say it, but I’m no coward so allow me to place my neck on the line here: I don’t know to whom the Spy of the title refers. Don’t misunderstand me, the wide concept of a mole in the top ranks of British intelligence is not difficult to understand and there is a character who is clearly pinned as the culprit, but there’s hints that there may be a deeper level of conspiracy going on just below the surface. This is where I get lost, and perhaps not surprisingly given that this is a film about trust, honesty, crosses and double-crosses. I don’t know how any of the ultra-serious men in this highly secretive circle (referred to by all as “The Circus”) could ever work together – it seems that they’re intensely suspicious of one another’s motivations from the very first scene. George Smiley (Gary Oldman) questions many of his peers on their memories of specific events, silently pulling together clues, but Ebert is right in saying that the movie keeps them mostly hidden from the audience. The opening scenes show a fairly typical shot from an espionage thriller – an operative meeting in a mostly empty locale, suddenly realizing something is amiss about the situation and bolting for the exit before being gunned down. And yet there’s more to the moment than meets the eye, the film returning to the scene three of four times to illuminate another aspect of the moment without shedding light on the significance.

That’s frustrating, to say the least, but what saves the film from being a total mess (as Phipps suggests) is in the sense of style prevalent throughout. The world of the film is cast in grays and browns, stoic men smoking cigarettes with smoke curling about their heads, gorgeous landscapes that elicit the era perfectly. It reminds me of another film from 2011, We Need to Talk About Kevin. I started my review for that film with the bold statement that I liked everything about the movie except for the plot. It’s gorgeously shot with a strong performance from its lead, visually striking in the shot composition, but utterly fails to sell the terror of its macabre plot. Similarly, Tinker Tailor Soldier Spy – though far less brightly colored –  achieves a level of visual artistry that provides its own unique edge. There’s so much energy in just the atmosphere of the film, and of course the slew of name actors give their all in their respective roles (I’d like to point specifically to Toby Jones and Tom Hardy).

Though there are far fewer gunfights in this spy thriller than might be in others, there’s a thick sense of tension in some simple scenes. There’s a nail-biting moment wherein Peter Guillam (Benedict Cumberbatch, Atonement) attempts to steal sensitive information by faking a phone call and slyly slipping the paperwork into his briefcase. Many of the scenes with the highest level of tension are ones where the principal players congregate around a meeting table in a soundproof room, yelling accusations at one another or sometimes doing little more than glaring. Yet like a game of ‘Clue’ brought to life, each character could very well be working for the enemy – it’s impossible to know who is trustworthy and who will order an assassin to put a bullet in your brain before the night is through.

In this way, Tinker Tailor Soldier Spy works… kind of. The viewer gets the sense of the chase, of the urgency, of what is going on, even if the specifics elude me. The world of the movie is an engrossing one, making for an inviting image even when the plot gets crowded. Perhaps I will return to the film at a later date and see things that I did not on the first viewing, everything clicking into place at once. However, at this time – after a single viewing – the film comes across as enchanting, yet abstruse. It’s a film I’d love to see again, but one that I’d be hard-pressed to recommend.