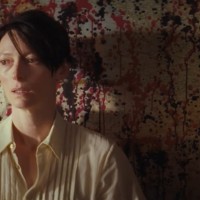 I love everything about We Need to Talk About Kevin except for the plot.

Tilda Swinton, as the lead, is great. The soundtrack is phenomenal – a strange assortment of blues tracks and Buddy Holly which contrasts with the images on-screen in a brilliant way. The sound design is superb: one standout scene in particular swoops fluidly from our heroine screaming to a baby crying, to a machine sanding a wall, then back to a baby which is now screaming. And the imagery, the cinematography, it’s stunning. The action on-screen goes back and forth from present day to bitter memories without warning, sometimes jarring the viewer with extreme close-ups or odd placement of the camera. In this way, in the care that obviously went into the production of the film, the finished product is a marvel.

But then there’s the problem of the story itself, which concerns a woman named Eva (Swinton) who is reviled by everybody in her town. She wakes up to find that somebody splashed a metaphor all over her house and car, and there are scenes throughout the rest of the film which show her cleaning the red paint off of the porch. The reason that she’s hated by everybody in town is that her son Kevin went on a Columbine-like shooting spree, making her guilty by association. One woman even walks up to her and slaps her hard because she is smiling – it’s that bad. While we witness her quiet acceptance of the position she’s been placed in, we are treated to flashbacks of the youth she shared with her husband Franklin (John C. Reilly) and the birth of their son, Kevin. From the start, he’s a terror. He cries continuously, so much that the sound of jackhammers are soothing to Eva’s battered mind. She’s convinced that he’s doing it on purpose, and as he ages her suspicion seems justified. As a child, Kevin glares up over dark eyebrows with a sneer. He acts petulantly, sometimes maliciously, and Franklin is oblivious to it.

The scenes of Eva in present day, coping with the mess that her life has become, seem to make a case for the film being a brooding psychological profile of a woman broken by actions she could not control. But in these flashbacks, Kevin is malevolent to the point that it becomes absurd. This is not the story of a child who was driven by depression or gradual rage to commit a heinous crime; it’s about a boy who is little more than a demon. It’s hard not to wonder whether the film is actually supposed to be a horror movie at this point, or perhaps a darkly black comedy. When Eva and Franklin’s second child Lucy winds up in the hospital, the image on-screen shows the two with dour expressions sitting in a pale, white hallway – colorful balloons with smiles painted on overhead. Moments like that seem to make a case for the movie being darkly comic.

When the tragedy does come, there are plenty of questions which are not fully explored. Despite the pain that the boy has caused her since he was born, Eva visits her son regularly at the prison. Is it because she feels responsible somehow for his actions? And speaking of, what is it that drove him to instigate such a brutal massacre – it certainly could not be a bizarre personal vendetta against his mother, could it? Such questions might be easier to answer if the boy did not appear so cartoonish. I don’t mean that in the Roger Rabbit sense, but in the very unreal nature that he seems to possess. He seems to be evil for its own sake, and even if we assume that there genuinely are people in the world who behave in such a manner, the film could have done more to make him into a real yet sadistic individual, rather than a mere collection of horrible acts molded into a human being. A bullseye reflected in Kevin’s gleaming eye is a beautiful image, to be sure, but it’s also a little bit simple – like the red paint to represent guilt, like the Jehovah’s Witnesses who come to Eva’s door to ask her if she knows where she’ll be spending eternity.

Lucy’s injury loses her an eye, and Eva has no doubts that Kevin is the culprit. But there’s no build-up, no tension here to make us think that there’s any danger for the child. It just happens that the family is called to the emergency room. When the shooting takes place at the school, there’s no sense of nervous dread, no brutal wrenching in the viewer’s stomach at the events which are about to unfold. The carnage itself remains off-screen. I’m not saying that the film had to show blood and violence in order to be effective, but what it did need to do is make the threat of violence seem real. Because Kevin himself does not seem real, his actions cannot be taken seriously. Certainly they are serious to the characters of the film – deadly seriously – but for the viewer, not at all. I was glad to have seen I Want to Be a Soldier just prior to this movie. That film, though it has its own problems, does a much better job of getting into the mind of its disturbed child antagonist. When the boy in that film plays with a knife, the tension is thick because he seems genuinely capable of plunging it into somebody’s heart. Kevin is all talk, all theatrics; again, even though he does commit terrible acts, it comes with none of the gravity that a truer depiction of a Columbine style attack requires.

I’d like to try to find some kind of meaning in the conclusion, something beyond the surface to get at what makes Kevin act the way that he does, and what drives Eva to return to his side no matter how far her son’s mental imbalance takes him. But anything I come up with is overwrought interpretation, seeking meaning where none is given. Is that all? When Eva confronts her son about why he keeps a collection of computer viruses, he states in his typically emotionless manner that, “The point is that there is no point.” Is that what the movie is getting at, that it’s foolish to look for a deeper reason beneath the surface for all of the actions which take place? If that is indeed the case, it makes me question the usefulness of the film altogether. Yes, it’s gorgeous, it’s masterfully made. But just as it’s unsatisfying for Kevin to be evil for evil’s sake, it’s less than satisfying for the film to be beautiful just for beauty’s sake. There needs to be something more at stake.

There’s a sweet sugar coating that covers We Need to Talk About Kevin, but I’m afraid that it’s mostly just hollow inside.