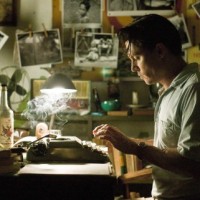 It may be unfair to think of The Rum Diary as an unofficial sequel to the transcendently funny 1998 Terry Gilliam masterwork Fear and Loathing in Las Vegas, but come on – how can you not? This film is based off of another Hunter S. Thompson novel wherein one of the author’s fictionalized stand-ins finds himself in an exotic locale, experimenting with all manner of intoxicants until he arrives at some deeper truth about art and/or the world. But to really seal the icing on the coffin, despite a thirteen year lapse between the two films, both star Johnny Depp in the role of Hunter S. Thompson: going by the name Raoul Duke in Fear and Loathing, Paul Kemp here. The writer and director of The Rum Diary is Bruce Robinson, the man behind the incredible Withnail & I (which, incidentally, I compared to Gilliam’s film in my review). Because I am familiar with Robinson’s previous work, I know that he has his own voice and I would like to be able to think of this as a standalone film, but it’s unfortunately difficult not to see this 2011 effort without the shadow of the 1998 movie looming overhead.

I remember seeing Fear & Loathing for the first time and being brought to tears from laughing so much. I could barely tell what was even going on in the plot in that first viewing – something about a race? – but the situations the characters got into were so fantastic and the dialogue so endlessly quotable that it instantly became a favorite. The Rum Diary doesn’t match its predecessor in any of these ways. Well, perhaps in being near-indecipherable on a first viewing (who is supposed to have “won”, at the end?). And this is where I return to wondering whether I’m being unfair because my expectations were colored by what I expected a follow-up to Fear & Loathing to be. There are certainly some funny and some surreal moments in Robinson’s film, but this PG-13 version of Thompson’s stories fails to capture the madcap energy this viewer had anticipated.

Where Gilliam’s version of Thompson was drug-addled to an extreme degree, so much that the film opens with the central character driving down the interstate so high that he’s swatting imagined bats with a flyswatter, Robinson’s version of the character is much more toned down. He drinks profusely, sure, and is willing to experiment with drugs, but there’s a difference in the handling of the character that makes them two very different beasts indeed. Raoul Duke only sobers up long enough to take wistful notes on the hard toll that the ’70s have taken after the glorious freedom seizing days of the previous decade – a moment that’s made all the more poignant by its sudden clarity. Kemp, on the other hand, is primarily a serious journalist with just a penchant for hard liquor. While he can come to similarly artistic sounding revelations (“I put the bastards of this world on notice that I do not have their best interests at heart”), it’s after a long stretch of investigative reporting and visions of social iniquity rather than early morning epiphany. He has clearly defined enemies here: first a wealthy businessman played by Aaron Eckhart who seeks to build hotels on an unoccupied Puerto Rican island, second the editor of the newspaper Kemp works for who refuses to run stories on island politics because that’s not what American tourists want to read. The ease with which Eckhart’s character, in particular, is reduced to traditional villainy after initially seeming an enigmatic character is disappointing. It would have been nice to see that the issue is not entirely black-and-white, but the movie reduces Eckhart’s motivations by giving Kemp sarcastic one-liners like, “You’ve got to pay to see the sea.”

Though, as mentioned, there are occasional energetic scenes much of The Rum Diary falls flat. I liked a sequence where Kemp and his sidekick Sala try to casually leave a high-tempered encounter at a diner, only to be chased down by a group of local toughs and forced to hold the group at bay with the help of a strong flask of alcohol and a lighter; that is the sort of sudden spiral out of control that the movie could have benefited from including more frequently. Unfortunately much of the movie turns to a romantic angle involving an uptown girl (Amber Heard) who’s been living in her white bread world as long as anyone with hot blood can. The movie skids to a halt every time she shows up. Even though she tries to spice things up with her PG-13 sexuality and driving really fast, the scenes uniformly end with standing silently looking at the ocean from the edge of a pier or talking about the status of their relationship. Yuck! Give me unrelated-to-anything, trippy scenes where a man’s tongue extends indefinitely any day of the week, just don’t force me to watch Hunter S. Thompson asking his best gal whether or not they’re going steady. This isn’t what I came to see.

But probably most offensive of all is the finale. It’s set up as a battle of moralistic virtue versus vengeance-driven sadism, yet in the end this fizzles out without much of a fight. The very final moments make such little sense that it was difficult for me to believe it when the credits began rolling. Surely, this is some kind of joke, right? After the film proper is over, lettering appears on the screen giving us an update on Kemp’s life (spoiler – he lives happily ever after). What? What am I watching here, A Beautiful Mind? I thought I was watching a movie about a man who lives life on the edge, happily ingesting any number of substances to get a buzz going, yet happens to be a successful journalist. Instead, it’s a movie about a successful journalist and the happiness he found in spite of occasionally letting his desires get the best of him (tsk tsk!).

In short, The Rum Diary is decidedly not related to Terry Gilliam’s film, despite outward appearances. It’s much more traditional, much more restrained, and ultimately much less satisfying. Let us never speak of it again.