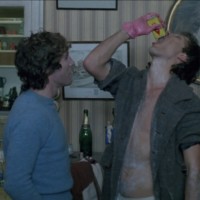 “As much a meditation on the death of the ’60s as a fish-out-of-water comedy, Withnail feels at times like an English version of Fear And Loathing In Las Vegas, another druggy, rambling black comedy about chemical-crazed misfits stumbling through a post-ideological wasteland.” -A.V. Club

When I first saw Terry Gilliam’s odd, rambling trip through the seedy side of America (the West coast), I was immediately entranced. Despite having little plot, the movie proved to be an extremely funny and endlessly bizarre. The two main characters drift from one locale to another, meeting up with ever-stranger secondary characters, spouting off the occasional profundity, and taking lots and lots of drugs. In one of the most amazing scenes, although there are hundreds, Raoul Duke (Depp) stumbles into a bar after getting so high on ether that he can barely function. Meanwhile, he explains the situation in voice-over, describing in detail what is – or isn’t – going through his mind.

All of this is to say that I wholeheartedly agree with the quote I began with. Much as in Fear & Loathing, the wildly spun Withnail & I (both movies have ampersands!) moves from one scene to the next without any worrying about how much it relates to the overall plot. Its goal is in providing a free-wheeling, joke-a-second show, increasingly awkward in ways that remind me of one of Roald Dahl’s stories for adults. In case you aren’t familiar with Dahl’s adult work, what separates it from his children’s stories are in the addition of a demented perversity to go along with his characters’ usual eccentricity. From a disoriented drug dealer with bizarre beliefs (and a penchant for experimentation only rivaled by Pineapple Express), to an unadmitted poacher, to a flamboyant uncle with one hated cat, the film throws all manner of absurd secondary characters at the screen.

But I’m just killing time before I say what really makes Witnail & I such a terrific experience. The answer is Richard E. Grant. In this early role, Grant plays the title character Withnail, and every single line reading is a phenomenon. He throws himself into the role with utter abandon, making it easy to accept the drugged out, drunken, days-without-sleep status of the two protagonists. Their eyes are dark from exhaustion, their frames weak and thin. Grant in particular spouts an endless stream of quotable lines, all in a bellowing and dramatic voice. Withnail and Marwood (the “I” of the title) are both failed actors, after all, and for Withnail especially, all the world’s a stage. It would be easy to fill 1,000 words by just listing each quote that left me laughing out loud. “We’ve gone on holiday by mistake!” he cries out to a farmer, in between verifying, “Are you a farmer?”

Well, that’s not entirely fair. While Grant is a scene-stealer, he’s got Richard Griffiths to contend with. You might know Griffiths as the evil uncle Vernon Dursley from the Harry Potter series, or perhaps you’re more familiar with him as the wheelchair bound Dr. Albert S. Meinheimer from The Naked Gun 2 1/2. Griffiths here plays Withnail’s uncle Monty, a spectacularly exuberant man. Extraordinarily gay and unbelievably mental, Monty takes a quick liking to the much too considerate Marwood. Monty’s advances become increasingly obvious, which is funny, but just the icing on the cake. The real treat is in every word he says. Much as with Withnail himself, every single line spoken by Monty is a gem. Listen to a speech that he gives on the beauty of the carrot, or god, listen to the way he concedes, “As a youth, I used to weep in butcher’s shops.” It’s incredible.

And actually, now that I’m at it, Ralph Brown as the drug dealer Danny is a major stand-out as well. He seems to be on a different level than Withnail and Marwood, so it’s not a battle for attention when he and Withnail are in the room so much as it is when Withnail and Monty are together. He’s so much further gone than they are, as most eloquently shown in a scene that has Withnail, black rings under his eyes, claiming that he could take the strongest of drugs without feeling any ill effects. Danny insists that his friend knows nothing of the world, removing his sunglasses to reveal eyes even darker than the title character’s. A short monologue that he gives about the cosmic properties of our hair follicles is astounding, too, leaving both Marwood and his roommate momentarily speechless.

The only person who doesn’t get a chance to really stand out is Paul McGann as Marwood. He plays off of Grant well, in particular during a classic scene that has Withnail drinking lighter fluid and threatening to follow it up with antifreeze. “You should never mix your drinks!” Marwood yells, on the very edge between sincerity and levity. Though he doesn’t make the same grand gestures of his co-stars, I tend to agree with Roger Ebert’s judgement that McGann “makes the right choices in the role; he doesn’t play a straight man or a sparring partner, but a fellow trekker on a daily journey to oblivion.” Indeed, Marwood is not without the ability to crack a joke or be just as drunk and tasteless as his friend – the two make a scene in a restaurant at one point, and when the proprietor threatens to call the cops, Marwood announces to the clientele that he and Withnail are multimillionaires who are considering purchasing the shop. It might seem somewhat out of character for Marwood, until you realize that he lives with Withnail. This is not a man who simply puts up with his deranged friend; he is, in some respects, equally deranged… but simply has some vague grip on reality left, a virtue (or curse?) that Withnail has somehow left behind. Despite the rift growing between the two friends, they work well together. Their arguments are very funny, the times when they work together toward the same delusion are hilarious.

I can imagine Withnail & I being the sort of film that I could watch repeatedly and still laugh at every joke I’ve heard a dozen times before. It’s all performed with such commitment. The characters are uniformly extreme and peculiar, the actors anchor it all with remarkable performances, the dialogue is ingenious. And how about the twisted rock of Jimmy Hendrix setting the scene? Altogether, it’s sort of classic.