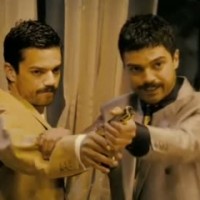 The Devil’s Double is a strange amalgamation of many different types of movies. It’s a B-movie actioner one minute, a grotesque torture film the next, and at one point it becomes an honest-to-goodness softcore porno. It seems to go in so many directions at once, but it is centered by its intriguing concept – Latif Yahia being snatched from his life in order to be the double for Saddam Hussein’s sociopathic son Uday (Dominic Cooper, in a dual role). Watching Latif forced to stand by as Uday’s tastes grow increasingly depraved is a wrenching experience, and the constant back-and-forth of who is the real Uday at any given moment makes for a film that keeps its viewer glued to the screen. The movie amazes with its technical marvel and with its seeming aimlessness in equal measure. I found myself feeling strangely repelled and fascinated by the movie simultaneously – not like watching a train wreck, but instead like watching a butterfly be born (sorry, I watched Microcosmos recently).

Taking place at the height of the Gulf War, the film is peppered with footage of bombings being carried out. Saddam Hussein and his family are terrorizing and torturing their own people and George H.W. Bush speaks on the television, trying to reassure the Iraqi people that the bombings are only meant for the government leaders. The unspoken message being communicated is, “We’re sorry, but we’re killing you on accident.” It’s a wonder that Latif felt he might have had a life to go back to, if Uday had not stripped him of his identity and erased his past from existence. The depths to which Uday’s moral lacking goes will later push him to strip an entire group of party guests of their clothing in order to humiliate and take his pick of them, but his worst crime is carried out at the start – dehumanizing his double to the point that he is but a husk forced to stand by as atrocities are committed in front of his eyes. His attempts at revolt are put down quickly.

This is heavy stuff, and this is where the film’s greatest strengths lie. It’s true that even this goes to absurd extremes – such as when Yadif, broken by beatings, jumps out of his bedroom cursing the waitstaff to prove that he has what it takes to play the outrageous Uday. “How’s that?” he asks smugly. I don’t know how many beatings it takes to turn one into a hammy actor, so this moment rang false. But other times, like when Uday suggests that he has ordered his doctors to mutilate Yadif’s genitals,  there is a sense of gravity because we are unsure how far the character – or the movie, for that matter – will go. And though Cooper absolutely devours the scenery when he’s in character as Uday (or Yadif as Uday, for that matter), the movie somehow remains chilling rather than comedic. It’s this serious tension which is served well by the portions of the film that lean toward action spectacle – when guns are fired, it’s possible that anybody could be hit.  And the scenes of Saw-level graphic violence drive home the very real terror of the situation that Yadif finds himself in.

But then there’s a strange subplot about Yadif’s romantic entanglement with Uday’s concubine, a girl who seems under her master’s spell entirely but later proves to be the most poignant and self-aware of the bunch. It’s okay for she and Yadif to fall in love and share the aforementioned soft-core porn interlude because they both know that they are aiding and abetting a criminally insane man with their fingers crossed. Not to say that the entire subplot is a lost cause, as the girl’s uncertain allegiance does build further tension. But the idea that the two would take the risk of sneaking around behind Uday’s back is hard to fathom. Ultimately the girl is relegated to the same role that all women in the movie play – as a pawn in the game rather than a player, her time on-screen a detour from the primary plot rather than an addendum to it.

But the movie doesn’t move at a pace that could allow time to build their relationship a stronger foundation. From the start, the plot is moving as fast as it can, leaving no time to think. Given Uday’s line when “offering” Yadif the job of becoming his double, “Take 10 minutes to think it over”, the pace may be to some extent intentional. This is what gives the movie that action feel, and at times I could just as easily imagine the film with Jason Statham playing the role of Yadif. But this also gives the film a sense of reaching conclusion with every twist in the plot. A scene would seem to be the culmination of the action and I would expect the credits to begin rolling, then the film would go on longer still, the story twisting ever more.

At times, the film feels most like an Americanized and Hollywood-ized version of a great art film with significant political overtones. Though set in Iraq with sets that look authentic for the locale, all of the actors speak in clear English with only slight accents. That, plus its editing and production value cause the film to maintain a level of artifice even though most of the footage was shot on location in Malta. It leaves the finished product feeling strangely like a soap opera, actors speaking with strong somberness though it’s hard to forget that they’re on t.v. The actors in The Devil’s Double don’t feel like they’re on television, but instead like they’re in a movie: with archetypal personalities that posit the hero as an upstanding, moralistic Jason Bourne type just waiting to make a move.

Like Ebert, I too feel that “there were times…it was preparing to approach greatness”. It has an exciting concept, incredible special effects, and a go-for-broke performance by its star. But the film’s pop sensibility keeps it firmly rooted as movie theater entertainment rather than the darker thriller that the material wants to be.