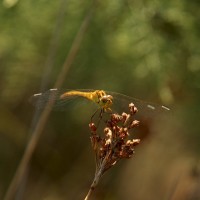 There was a time once, staying at my parents’ house – and to this day I swear it’s the truth – that a moth the size of a bird entered the house and scared me senseless. My family likes to joke about this incident, but believe you me there are few things in this world as frightening as seeing an animal fifty times its normal size. When viewing the elegant 1996 documentary Microcosmos, you will feel this same sensation. While there are a wealth of memorable images that are likely to remain embedded in a viewer’s memory, the one that comes most readily to mind for me is a steady shot of what appears to be an owl perched on a tree. As the great bird spreads its wings, those familiar eye-shaped patterns appear and it becomes clear that this is no bird at all… it’s a moth. Unlike my experience, however, this moth is of average size. It is only with the help of special microscopic cameras that the filmmakers are able to capture such awe-inspiring images.

Reading about the film online, I’ve heard that it took three years for directors Claude Nuridsany and Marie Pérennou to capture the footage exhibited here: dozens of different types of insects, deeply involved in the most intimate moments of their brief lives. I’ve read that the time it took to get the technology together for filming sets the entire production at closer to a decade. But the end result is nothing short of fantastic.

I’ve been avoiding the movie for some time, though I knew it was mostly well-respected, because I had imagined that it would be no different than any other nature documentary. Yes, this one is primarily about insects, but is there really any new footage of ants crawling over one another that can excite anymore? As it turns out, yes there is. Because of the filmmakers’ specialized equipment, the images gathered are unlike any ever seen. We watch an ant sipping from a single drop of water, or a ladybug opening its protective outer shell and spreading its wings to fly. From this close, every insect looks like bizarre and alien. From this perspective, a green caterpillar looks like a hideous monstrosity created by accident in a science lab. The whole film leaves you stunned by how diverse, specialized, and downright unnatural common insects are. I found myself drawing comparisons to Pokemon.

But it’s not just the fact of the movie that makes it such an astounding work. Seeing insects from a standpoint never before realized is indeed quite a feat, but more remarkable is the array of activities they’re involved in. It’s hard not to feel uncomfortable, like a voyeur invading the privacy of the subjects, and I’m not just talking about the scenes of insects copulating – although there is a particularly salacious scene where two snails become entwined, the camera focusing in on their slimy flesh undulating against one another in a way that is disturbingly erotic. But I’m not just talking sex here, as there’s something kind of invasive about watching a troop of ants carrying pieces of food and seeds to be added to a great underground store. We get a view inside the cavernous tunnels as one designated ant sorts and piles the collected food items, unaware that this hidden treasure is no longer hidden. In another scene, a beetle rolls a ball of dung along, pushing and pulling as necessary to maneuver over pebbles and through valleys. When the ball becomes stuck on a branch, the beetle’s Herculean efforts to move the matter forward are adorable – watch the insect burrow its head under rocks to gain leverage – as well as embarrassing. It’s easy to feel sympathy for the creature when you see it in such a pitiful state, and its eventual success in freeing the ball of dung from the branch brings a similar level of catharsis.

Then the camera pulls back, back, back, back, back until the insect and its charge are but small dots on a lengthy slope. It gives an endeavor which felt so important and challenging on a microscopic level a decidedly Sisyphean edge. What is the purpose? As ants are picked off by a bird without any chance for escape, the bleak brevity of their lives is drawn into focus. Perhaps even more visually arresting is a sequence wherein a large spider sits menacingly in the middle of its web. A grasshopper makes the mistake of jumping at the sticky substance and becomes lodged there, squirming for its freedom. Within moments, the spider has darted to the grasshopper’s side, turning it rotisserie style while wrapping its prey up in webbing like a mummy. We aren’t seeing this from afar, mind you, but rather from just over the spider’s shoulder as it entombs its struggling victim. At this magnification, the deed is real to us. We all know that spiders eat insects trapped in their webs, but watching the carnage from this level is sickening.

But really, it’s just the tide of life. A wormy maggot shuts itself up in a cocoon, emerging later as a fully formed wasp – its huge body and folded wings impossibly crammed into a tiny shell like it were Mary Poppins’ handbag. One insect lives, another dies, another is born again. Though it has a bombastic score by Bruno Coulais (Coraline) that suits its subject matter perfectly, the film is thankfully short on narration. A few words for staging here or there, but for the most part the only sounds we hear are the clicking of insect feet or buzzing of speedily flapping wings. There’s no point that the movie is trying to make, no position it wants you to take. It doesn’t ask you to change your buying habits or question the legitimacy of our traditional beliefs about the who was really behind the events of September 11th.

Instead, Microcosmos has one goal only: to be entertaining. At that it succeeds, though at 80 minutes still feels overlong. But from the opening shot – the camera swooping through the clouds, descending past the treetops and embedding itself within the jungle of a grassy meadow – it’s clear that the film’s intent is to transport its viewer to a different world entirely. It’s a magical, frightening world of both dreams and nightmares. It’s the world we live in.