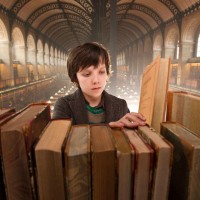 It was in February of 2011 that I announced that Hugo Cabret was likely to be a miss. It was still called Hugo Cabret at that time rather than simply Hugo, and there was little advance word except that it would be a 3-D children’s feature directed by Martin Scorsese. I’m a fan of the director, certainly, but not the die-hard type and it was all too easy to reference the seemingly awards-ready Shutter Island which was put on the shelf at the last moment. “I won’t be surprised if this movie suffers a similar fate,” I mused, “not being as important as we thought it was.” Upon its release, the critical consensus was fairly enthusiastic, but my hunch is that the passage of time will reveal the film for what it truly is: a warm valentine to the cinema, but little more.

The parts that make up that valentine are the film at its best. The scrappy orphan who provides the film’s title activates memories of his father while the light of a projectionist’s camera flickers behind him; when he befriends a girl named Isabelle (Chloe Moretz), he takes her to her first picture show and she stares in wide-eyed amazement as Harold Lloyd clings to side of a building. This image will be reconstructed later on as Hugo himself finds himself dangling from a clock face while trying to elude capture (you might recognize the image from the posters). The difference between Lloyd’s work and Scorsese’s is that here there is little tension regarding the boy’s safety, making the scene less one of thrilling spectacle and more in the vein of name-checked references. Along similar lines, characters speak of the 50-second short “Arrival of a Train at La Ciotat” multiple times, noting as fact the myth that audiences at the initial screenings became frightened at the thought that the train was about to come out of the screen at them. Perhaps if I had viewed Hugo in 3-D, I would have found more to enjoy in a dream sequence which co-opts the concept by having a CGI train barrel straight toward the camera. Instead, it’s immediately apparent that the moment is a dream sequence and the image feels, again, like simplistic homage.

Not that there’s anything wrong with that. If you don’t have sex, nostalgia sells just as well; so maybe Scorsese doesn’t bring much to the table here, but he recites the lines with grace. A late-in-the-game montage detailing the extensive filmography of one particular Golden Age director is especially compelling, as well as other interstitial images of silent films while the actors speak in reverent tones about the way that the movies can transport you to the world of dreams. There’s a suggestion that books serve that purpose just as well as movies do, but it’s not really expanded upon – it seems that the introduction of Isabelle’s fondness for books acts mostly as a catalyst for additional plot points. But beyond that, Scorsese has fun simply setting up the scene for his own purposes. Though many shots are hardly unique (e.g. the CGI swoop across Paris in to Hugo’s partially obscured face, a steam-filled foot chase through a Parisian train station), the composition and lighting make several scenes breathtaking nonetheless. What comes to mind are the D-story scenes of a couple’s amorous advances being interrupted by an unruly dachshund: the scenes are often shot from Hugo’s perspective hidden behind clock faces, sunlight streaming into the bustling train station as the two characters attempt to move closer to one another. It’s not the kind of work that waves its arms in front of your face – nothing like the extended tracking shot of Goodfellas, for instance, which practically begs to be noticed apart from the context. It’s just a simple fondness for film that comes through in the way that the characters speak about the medium and in the gentle handling of Hugo‘s story. It’s conveyed so well that it’s easy to agree with Roger Ebert when he calls it heartbreaking to hear that a director “melted down countless films so that their celluloid could be used to manufacture the heels of women’s shoes”.

Beyond this, however, the film deals in broad archetypes and bland platitudes about a person’s “purpose” in this world. Some see this tendency as a classical streak, using well-worn paths to build the bones of the story and then fleshed out afterward. I find it difficult to see the skin for the skeleton, if you don’t mind me hanging onto that metaphor. It’s utterly groan-worthy when the mean train station inspector (Sacha Baron Cohen) reveals that he is always trying to capture children to send off to the orphanage because – shocker! – he himself was an orphan. There are numerous threads of romance throughout the movie between men and women (of multiple species, even), but none carry any weight and end up feeling primarily like padding rather than muscle. A great deal of the first half of the movie involves Hugo’s attempts to retrieve a notebook of sketches that his father made, sketches which will help him to complete construction of an automaton which may or may not hold secrets about his family’s past… and yet the movie easily forgets about the importance of this notepad when it decides to let the story progress without resolving the issue.

You could say, “It’s just a movie!” That might be a reasonable position to take. I made just such an argument when discussing Quentin Tarantino’s Inglourious Basterds, a film I felt worked in spite of its narrative lapses because its intent seemed to me a celebration of the possibilities that the cinema provides. But where Tarantino used the opportunity to indulge in some extreme tension-baiting and stylistic flair, Scorsese doesn’t seem to have much on display aside from a knowing smile. It’s not inherently wrong to use those character ‘types’ to populate your film, but I tend to agree with Tasha Robinson’s complaint that Scorsese never “imbued them with anything new, fresh, or believable”. As it stands, Hugo works as a pleasant pastiche of understandable themes, recognizable roles, and evocative references to the films of yesteryear. But as its own work, the movie is decidedly slight.