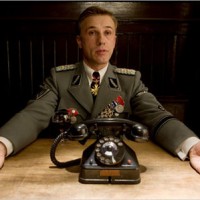 “Unlike Spielberg, QT takes the complexity out of war, racism, history and heroism. His love of movie trash doesn’t reveal deeper truth; it trivializes.”
-Armond White

“Check the scene where Landa confronts Shoshanna years after he’s killed her family. Her loud, personal tension recalls Michael Corleone’s pivotal moment in The Godfather, but she’s not defined beyond her anguish.”
-Armond White

“Is the best way to work through the atrocities of the 20th century really to dream up ironically apt punishments for the long-dead torturers?… We learn nothing about, for example, why the unit is under the command of the gentile Lt. Raine or how the soldiers relate to him or to one another.”
-Dana Stevens

I have decided to begin my review with those quotations because I think that the writers vastly misunderstand what Quentin Tarantino’s Inglourious Basterds is truly about. These critics do not seem to be able to divorce themselves from what they believe the movie ought to be when they talk about it. Much as with Spielberg’s Holocaust film, the focus of the narrative is not really on the genocide itself – nor should it be. I had this discussion with myself on my review for Schindler’s List, so I will not go into it again here. The short of it is the idea held by some that a movie set during the Holocaust must be about the Holocaust, an idea which I am strongly opposed to.

Which is not to say that White and Stevens are wrong. I’m getting ahead of myself here, but they both bring up great points which really helped me to understand the film a little bit better. White finds the movie lacking in complexity, says it doesn’t reveal “deeper truth”. But did it ever claim to? Both critics find fault in the fact that the characters do not go much further beyond that: characters. We do not learn much about the band of Jewish Nazi-killers known as the ‘Basterds’ beyond the fact that they are Jewish Nazi-killers. That’s true. Shoshanna, indeed, is not really defined much beyond the fact that her parents were murdered by Landa. But I think where White and Stevens fail is in the idea that they need to be defined any further.

Tarantino makes movies for movie lovers. People who love the imagery that films can provide, the emotional tugs that an expert filmmaker can produce. That is all that interests Tarantino. In Inglourious Basterds, Tarantino alters history for the sake of his story and when asked why he did this, he explained that his characters don’t really exist… so why should the story be constrained by the history that actually exists? Keeping that in mind, we don’t learn about the men working under Lt. Aldo Raines because they are not real people. They exist only as pawns for Tarantino to move around, which is why the movie can jump around in time without worrying about all that pesky stuff that happened in between. What happened before and what happened afterward are not important; what is important is what the director has chosen to present on the screen. Looking beyond that is a mistake.

One of QT’s favorite ways of moving the audience is through dramatic tension. There are numerous scenes where the tension grows so thick that the viewer can barely bear to wait for the resolution, right from the opening. Tarantino knows how to hold this tension, and he’s damn good at it: he plays the scene like a violin, holding back just enough information to leave the audience wondering before letting go just a little and then holding tighter than before. Alfred Hitchcock is well known for his “bomb theory” of tension, the idea being that real tension comes from knowing that there is a bomb and not from seeing it. Or rather, when we know more than the characters do… or if we are unsure how much the characters know, that’s when the tension rises. Note that this rule says nothing about the characters’ motivations, their back-stories, how they managed to get into a room that holds a bomb. None of that is important. What is important is the bomb and the knowledge of it.

We are free to speculate as to the relationship that Shoshanna shares with her employee, Marcel, but we are given all the information we need when we see that they have some sort of romantic link. The fact that they have a romance, little-developed as it is, is enough for us to understand why he would be willing to put her, ahem, final solution into action. The Basterds are Jewish because that gives them enough reason to kill Nazis without mercy. They are led by Aldo Raine because he is there to lead. Raine has a conspicuous scar on his neck: the scar is never explained because it is not important to the movie.

This way of looking at film is not universal. There are certainly other movies which do require a deeper look at the characters’ intentions, movies that benefit from the pasts of their protagonists, that cut deeper because of the dramatic under-current which is never even shown on the screen. It is unusual for a movie to work on the level of pure film the way that this one does, for the action to be important not for what happens so much as the fact that it is happening at all. The fact that Tarantino can set out to do that – and do it well – shows exactly why Inglourious Basterds is a great movie.

I don’t think that it was perfect. Some of the typical QT flourishes show up where they really don’t belong. Samuel L. Jackson narrates one scene for no particular reason. In another scene, a character’s name is flashed on-screen in bold, stylized letters. Arrows point out high-ranking Nazi officers. Furthermore, although Tarantino has a knack for drawing tension out of the most mundane conversations, there were moments when it felt as though he were pushing it too hard. The “milk” scene with Landa and Shoshanna jumps to mind immediately, as the too-perfect hints that Landa might know the girl’s true identity stop feeling organic and become what they really are: Tarantino manipulating the scene.

Ah, but I haven’t even mentioned Christoph Waltz’s amazing performance as Landa, or the fantastic climax and pitch-perfect final moments. Yes, there are moments where the movie crosses the border into the cliche of Quentin Tarantino, but the vast majority of the film is the writer/director on the top of his game. In the end, I tend to agree heartily with Dennis Lim’s Slate.com article about the movie, when Lim concedes: “[Inglourious Basterds] may not be his masterpiece, but for sheer chutzpah, it will be hard to top.”

One Response to “Inglourious Basterds”