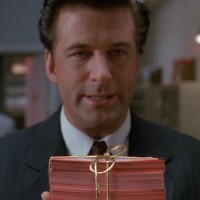 The famous “coffee is for closers” scene from the David Mamet-penned Glengarry Glen Ross has been appropriated by sales managers as a training tool ever since the film’s 1992 release, an irony not far removed from training ship captains with screenings of Titanic. It’s a story about a group of men who are consistently patronized, demeaned, and otherwise beaten down to the point that the line between honest work and crime is too blurred to discern. Or if it’s not mistakable, it’s at least inconsequential.

The men all work for Premier Properties, a less than reputable outfit that has tasked its employees with selling worthless real estate in Florida to buyers so far removed from that sunshiny state that they don’t recognize the ruse until it’s too late to renege. To my surprise, it was just a few minutes in when Alec Baldwin appeared to deliver his famously pithy, prickly speech – announcing to the team their worthlessness, suggesting that they lack both drive and masculinity, and threatening their lives. For their lives are their jobs and no matter the big talk they talk about pledging allegiance to a different firm, the world outside is a dark and stormy one.

Call it a spoiler if you must, but it’s telling that nobody gets ahead by the end of Glengarry Glen Ross. Those that haven’t faltered are, at the very least, in no better a place than when the film began. For all Baldwin’s talk of watches worth more than the average salesman’s yearly salary, that’s all the suggestion remains – just talk. Which is appropriate, given that the film is based on a play of the same name, and live theater tends to rely on dialogue over explosions, for some reason. Accordingly, the entirety of the film is wordy; characters talk at one another, over one another, their lines punctuated with stabbing accusations and a liberal use of expletives. It’s anactor’s movie, with each of the primary characters given an opportunity to gnaw on the scenery a bit. Perhaps it should be unsurprising that of every one of the central cast has been nominated for – or won – an Academy Award.

Relying on the darkest of comedic impulses, the film finds humor in the depth of despair. Watch as Shelley (Jack Lemmon), begging his boss (Kevin Spacey) for the names of a new set of leads whom he feels will give him a better return on the investment of his time, shifts suddenly from demure groveling to biting rage. Watch as Dave and George (Ed Harris and Alan Arkin, respectively) avoid their work, choosing instead to while away the evening in a coffee shop – Dave blaming his financial misfortune on the buffoons in charge while George nods continuously in agreement. And in one of the funniest, most depressing moments of all, see hot-shot Ricky Roma (Al Pacino) swing an intimate conversation into a sales pitch by smoothly producing a pamphlet. The look on the face of his mark slowly loses its convivial spirit, but it’s too late – the hook has pierced flesh, so to speak.

It was hard not to compare the film to the one other true-to-life picture of pure salesmanship that I’ve seen, Albert and David Maysles winning documentary Salesman. That film depicts the high-pressure trade in much the same way as Mamet’s film; high-pressure in the sales tactics, and high-pressure in the burdens placed upon the peddlers. But where the Maysles really honed in and focused on the state of mind of the group of smooth-talkers they’d chosen to chronicle, Glengarry takes a broader tack. Rather than look at the mindset of, say, George Aaronow specifically, the movie gives us glances at the frustration of the group as a whole. This tends to make the finished product feel less than compelling. That is, it feels as though we the audience are being kept at something of an arm’s length, able to see the big picture but unable to admire the brushstrokes. Every line is about “the leads”, “the leads”, “the leads” – names of potential buyers who are much more likely to give up their money than people named Patel (“Shiva handed this guy a million dollars, told him ‘Sign the deal!’ he wouldn’t sign”). As a result of this focus, every line is about the business, about the machine that is sales. Not to say that it’s not clever in its own right, but it feels as though – despite the emotional outbursts each of the characters get a chance to bring into the spotlight – the movie is missing a crucial human element.

One might argue that I’m trying to make the movie something it’s not. Then again, let me draw your attention to two scenes that illustrate my point. First, there is an opening sequence where Shelley and Dave sit in adjacent phone booths, the latter talking shop with a potential client in that ever-so-persuasive way while the former argues with hospital staff about the care that his sick daughter is receiving. On a surface level, the scene is dressed up with a bold red background and the parallelism is hard to miss, but then again there’s a sentimentality in Shelley’s concealed concern that makes the moment something more than satire. Even more moving, however, is a scene where Shelley forces his way into the home of an uninterested client, forcing a smile and maintaining a confident, self-assured tone even as it’s obvious from the start that the man wants no part of the pitch. But that confidence is a front; it’s a testament to Lemmon’s skill that he can play confident and crumbling in the same breath. Once again, there’s a level where Shelley’s rain-drenched sad-sack character, dripping water on the mark’s nice furniture, is a joke in and of itself. But then there’s the level where the character is truly at his wit’s end, trying to keep himself motivated by simply telling himself that he is. It’s the mindset of the character here that is ultimately heartbreaking.

It’s not an element that is sustained. Too often the movie falls on loud, profanity-fueled yelling matches (“WHAT YOU’RE HIRED FOR, is to help us… does that seem clear to you? TO HELP US, not to… FUCK US UP… to help those who are going out there to try to earn a living… You fairy. You company man”). This is entertaining, yes, and the winking cleverness of the affair is generally rewarding rather than grating. Yet Glengarry Glen Ross lacks the sort of gut-punching humanity that could have made its characters more fully realized. The emotion here is brief, and layered with irony, which makes it hard to connect with any of it. In the end, the film remains too true to its stage origins – disconnected from its viewer through artifice, sufficiently enjoyable but less than enveloping.