My Dinner with Andre 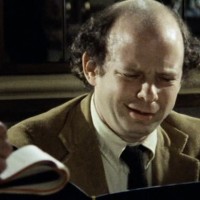 My Dinner with Andre

About four years ago, I saw and became a fan of the Robert Altman film Secret Honor. It’s a lesser film from the visionary director, an adaptation of a stage play for the screen. Or more accurately, it transposes the play directly onto the screen; the movie runs for an hour-and-a-half, the only actor is Phillip Baker Hall (Boogie Nights, Hard Eight, Duck). Hall plays Richard Nixon, a fictionalized version of the man, and spends the entire length of the movie talking to nobody in a room by himself. That’s right, the entirety of the film is one man talking to himself. I was entranced. Due to my obsessive nature, I became a huge fan of Hall for a time on the basis of this performance alone, but I was fully aware even then that this was the sort of movie that you have to be in the right mood for. It’s difficult to just sit down to a feature-length monologue without being prepared. The same principle holds for the art-house favorite My Dinner with Andre, which augments the set-up of Altman’s film slightly, by including two major players instead of just one.

It’s hard to watch. I’ve included the preceding paragraph as a disclaimer, to acknowledge the possibility that perhaps I was just not in the right place at the time, mentally, to fully appreciate the extended philosophical mutterings of Andre Gregory and Wallace Shawn. Be that the case or no, my judgment remains: this is a difficult film to sit through.

Shawn, known for little other than his role in The Princess Bride (yes, he does say the word “inconceivable” here), meets his colleague in a fancy restaurant while setting the scene in voice-over. Andre has been out of his life for years, only re-surfacing recently when a mutual friend saw him crying at an Ingmar Bergman film – a response spurred by a line of dialogue: “I could always live in my art, but not in my life.” It’s a curse of the theater, I suppose, to not be able to separate sincerity from maudlin pretentiousness. (Ahem- those that live in glass houses, Josh…) Through this chance meeting, the under-employed Wallace Shawn is invited to share a fancy meal with Andre so that the two can reminisce over the events of the past few years, expound on their individual philosophies regarding the role of art in modern life, argue over the usefulness of the scientific method, speak in florid terms about the upper-crust ennui that affects all great minds. You know, the same things you and I would talk about when we go out to Applebee’s.

If my description made their conversation sound interesting, I apologize. The bulk of the talking is done by Andre himself, and it’s certainly an awe-inspiring performance. The conversation is obviously scripted, but he brings a dynamic realism to the role; it seems as though the man truly is free-associating thoughts and memories in his discussion with his friend. What prevents this from overtaking the viewer is the fact that the dialogue itself is unrelatable or uninteresting. Andre speaks of forming an experimental theater group in the woods of Poland, forty men and women who cannot speak the language of one another learning to improvise their lives. What? Or how about later in the conversation, wherein he speaks of a troupe he spent time with who wished to create an immersive horror show for Halloween (a modern day Shelley party). The participants were taken to a darkened basement where they were to write their last will & testament, then stripped naked & run through the woods before being buried alive for half an hour and dug up again to dance round a bonfire. Again, what?

I’m uncertain how we the audience are expected to respond to Andre’s confidence in the utility of these experiments. Though he later admits that taking part in these games has left him feeling disenchanted, the furious excitement he gets from speaking about them says otherwise. It’s hard to take anything the man says with any seriousness, particularly as he declares everything short of electric blankets to be fascistic. “Don’t you see that comfort can be dangerous?” he asks earnestly. It’s true that Shawn attempts to counter some of his friend’s claims, particularly in an extended sequence which has him defending the possibility for truly life-affirming messages to arrive without the need to travel to exotic locales and test the limits of one’s endurance. Maybe it’s simply because I found his words far less repellent than Andre’s, but Shawn’s flustered rebuttal to his compatriot’s outlandish assertions made for the highlight of the film in my eyes.

But even then, there’s so little of worth to hold the skeptical viewer’s attention. Roger Ebert marvels at the story-telling prowess of the two leads, which is central to what he deems is the film’s success: “We see [the actor’s] faces, but we picture much more.” I disagree. We see the actor’s face, but we don’t get much more. Sure, there are a handful of seemingly poignant bits of dialogue. Take Andre’s ponderous, “Do you know, in Sanskrit the root of the verb ‘to be’ is the same as ‘to grow’ or ‘to make grow’?” It skillfully skirts the line between meaning something important and being entirely superfluous. Perhaps we can interpret it into shape, say maybe that Andre’s role in the conversation is less about describing physical events than about challenging his friend into action, into shedding the tranquil stasis of comfort and to be (i.e. grow, in thought and personality).

Or maybe that’s just reaching too far, trying to give My Dinner with Andre the benefit of the doubt and too much credit because it’s well-respected in many circles and there’s got to be a reason for that, right? As an outlet for the actors, it’s a showstopper from the start. As an expression of genuine pop philosophical concepts, it’s muddled and chilly. As a film, the parts working together to form the whole, it’s just a disappointment.