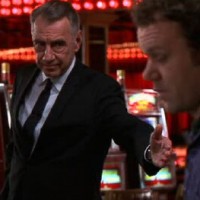 There was a time when Phillip Baker Hall was my favorite actor. It wasn’t Hard Eight, the first film directed by a little known filmmaker named Paul Thomas Anderson which convinced me of Hall’s greatness. Instead, it was a lesser Robert Altman film called Secret Honor. The term “one-man show” could not be more apt, as that film has Hall playing Richard Nixon – an hour and a half of Nixon rambling into a microphone for his memoirs, the camera never leaving the room or moving from the actor’s face. As the film progresses, it becomes harder to see Nixon (the actor hardly shares any physical resemblance anyway) and easier to see an old, decrepit man, slowly losing his mind. It’s a stellar performance, but unfortunately the actor has been relegated mostly to bit parts in other films, recognizable to most only as the library detective from that one “Seinfeld” episode.

Thank god for Anderson, who also saw Secret Honor and realized the same thing I did: Phil Baker Hall is a living legend. So in Hard Eight we have Hall playing Sydney, an con-man of generations past who runs into John (John C. Reilly), who is down on his luck and just miles outside of Las Vegas. Lighting a cigarette and with a squint, Sydney asks what John would do if he was given $50 and taken back to Vegas – would he blow it all immediately, or would he be smart and make it last? Thus, a friendship is born between the two and the first relationship of the film is set up.

A lot of the movie is set-up. According to IMDb Trivia, Anderson based a lot of the film on the 1956 French film Bob le flambeur, which in turn influenced Ocean’s 11 as well. So perhaps it should come as no surprise, then, that the first half (if not more) of the movie is a matter of putting the pieces in place, coiling the thread slowly and surely. It’s clear that this is a first-time effort from Anderson, which actually isn’t a criticism. The scenes he constructs are eloquent in their simplicity. The relationships between characters are forged across tables – in diners, casino bars, while shooting craps – they stare at one another intently, swirling their drinks or thumbing their cards or lighting another cigarette. As much is said in the silences as is said in the dialogue. The dialogue, by the way, is sometimes clunkily obvious (see Sydney and John’s parallel reading of a questioned, “Right?”), but more often beautifully poetic.

I guess you could say that the movie is “low-key” or “under-stated” or some variation on the meaning that’s intended with that sort of phrasing. Hard Eight began as a film school project, so there are no elaborate sequences of frogs raining from the sky here. Instead, the drama unfolds in a much smaller scale – but with no less a sense of tension. While there are more actors here than just the one as in Altman’s film, we are nevertheless limited almost exclusively to just the four players at the center: Gwyneth Paltrow, Samuel L. Jackson, Reilly, and Hall. Again, though the number of actors and the action is limited somewhat by a smaller budget and tighter story, this is in no way a criticism. Quite the opposite, in fact. Because the movie is carried entirely by the strength of the actors, a great level of skill and dedication was required to sell the events which transpire. If you don’t believe the relationships, the characters, the situation, then all is lost for you as a viewer. This is why we spend so much time with the characters. Sydney speaks alone with John about his familial troubles, he soothes Clementine (Paltrow) and discusses her economic situation, and, well, he deals with Jimmy (Jackson) as well.

There is a happening which alters the course of the story, something to neatly divide the rising action with the falling action. It is at this moment that the movie really begins firing on all cylinders. To be honest, when I first viewed the film I felt some frustration with the slow speed of the first half. It is in the second that things begin to take shape, that plot points begin to come together and things begin to happen. It is not what you are thinking. Noting the connection to Ocean’s 11 was perhaps unwise – there is no convoluted heist, no bizarre twist ending that throws everything before into disarray. Not to say that there is no twist, mind you, simply that the movie isn’t working toward some gimmicky finale. If the “twist” of Hard Eight seems unbelievable, that’s okay, because the point is not really in what it means in the here-and-now (aside from as a device for providing momentary friction between two characters). It’s used instead as a way of re-framing the character interactions. Or maybe “re-framing” is still too strong a term. Re-interpreting, maybe.

It’s so damn hard to speak about the movie without discussing it in more specific ways. It’s not that I feel that pointing to a specific scene would be a spoiler in any way, but that there is so much of value here and so often it’s very simple… I don’t want to rob a first-time viewer of the experience. Watching the movie recently, there’s like a twenty minute sequence wherein Sydney meets with Jimmy in a deserted parking lot. First Hall then Jackson get the upper hand in their conversation, a remarkable battle that takes place on screen without a single punch being thrown. Each actor has his own style of speech which he brings to the character, so that it’s easy to see the lines of dialogue as they were written on the page while witnessing the vibrant life and immediacy that the actors bring to the words. It all comes together in a stirring phone conversation which, honestly, could be one of my favorite scenes in any film I have ever seen. I realize that those are strong words, but it’s just a phenomenal moment.

When I wrote my original review of Hard Eight just a little over three years ago, I also made sure to mention Jon Brion’s smooth score, which “weaves itself into the story” and “flows so naturally” (yes, I have no hesitation with quoting myself). It would be foolish of me to forget about Anderon’s deft handling of the images – a lot of wide shots, like the instantly entrancing opening scene that introduces both John and Sydney.

Really, this is almost everything that I look for in a movie. A clever, funny, interesting script. An excellent score which works in conjunction with the action. Gorgeous imagery. An emotional depth that makes your heart ache. And incredible performances by amazing actors who absolutely own their roles. How many more synonyms for “fantastic” can I use to describe this movie? Paul Thomas Anderson made a masterpiece right out the gate.

Hard Eight is truly one of my favorite films.