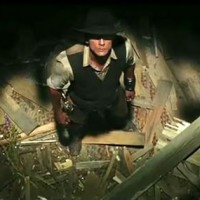 When I review a film, I like to try to look at it from a different angle than other critics are liable to. For instance, after watching the dancestravaganza Step Up, starring Channing Tatum, my review for the film centered on the gritty underside of the story, of the fact that people do die in the world of the film series. Most other critics, however, are likely to see it for what it is: light entertainment coupled with a few intriguing dance sequences. Or how about my famous (by virtue of me forcing it into every conversation) review for Gaspar Noe’s Irreversible, where I totally ignored the thing that everybody else wants to talk about – the graphic rape scene – and instead focused on the movement of the camera through space and time. The reason I try to take a look at films from a different angle in this way is because I don’t want to just say the same things that have been said before. What use is it to you, the reader, if you go to a critic’s website and he or she has nothing new or interesting to say about a given film?

These are the thoughts I’ve got running through my mind. This is the reason that it’s taken me several days to get any words about director Jon Favreau’s Cowboys & Aliens down on paper. I feel as though I have nothing of value to contribute to the conversation, having been thoroughly unmoved by the film. I guess I could say that the acting is bad or the story is dumb, or any number of those things that you’ve probably already gleaned from the critics as a whole thus far. In fact, I began writing just such a review:

[Cowboys & Aliens is] little more than an extended version of the trailer. Jake Lonergan (Lone Gun?), played with unblinking sincerity by Daniel Craig, wakes up in the desert with a metal device attached to his arm and a wicked case of amnesia….In any case, despite his memory loss, Lonergan handily takes down a group of cowboys who surround him and intend to take him as a prisoner. In a foreboding moment, Lonergan punches a man who is out-of-frame, the blows accompanied by ridiculously false punching sounds. If the film is willing to accept the laughable so early on, there’s certainly no hope for the rest. But really, the majority of the film from that point isn’t hilariously awful, nor is it even eye-gougingly awful. Instead, it’s merely passable. Relying on a set of standby characters, muddled motives, and some peculiar gaps in plotting, the film works its ways from Point A (Cowboys) to Point B (Aliens) in as direct a route as possible. The characters are uniformly difficult to relate with, with the sole exception of Colonel Dolarhyde (Harrison Ford) – the one person in the film with any semblance of emotional growth. Lonergan and his girlfriend Olivia Wilde remain listless throughout.

Now, you may not know this about me, but I’m not the type that relishes re-writes. I rarely put much effort into editing the reviews which I compose and sometimes let my thoughts drift along in such a haphazard fashion that many of these pieces of criticism sum up with, “I hope this makes sense.” To willingly scrap 600 words simply because I am unsatisfied with the direction the review is taking, why, it’s unheard of. There’s got to be some deeper thesis to draw these words around, right? There has to be more to say about a film which garnered much excitement upon the release of its trailer, which was directed by the same guy who created the positively received Iron Man movies, and which stars James Bond alongside Han Solo. And yet all I can think of is, “It was okay.” It was not entirely terrible. Or, to quote my wife’s shrugging reaction to Cedar Rapids: “I’m watching it.”

Okay, so let’s do a thought exercise here, you and me. Is there one scene in the film, just one moment that stands out in my mind – one image or line, perhaps, which rises above the rest and seems to embody the spirit of the film? Or, at the very least, something which seems pivotal in the film’s powerlessness? No? Okay, failing that, maybe something a little more abstract… perhaps there’s some aspect of the film, take the term how you wish, which fueled the film’s ultimate ruin. This I think, this may be a task that I can perform with more ease. The problem with Cowboys & Aliens is that nothing really matters. That’s not entirely an original thought, either, as there have been others who reported that the film doesn’t fully embrace either its roots in the Western genre or in the Sci-Fi genre. But what I mean is this: there is a scene from the trailer where Lonergan, metal armband transformed into a laser blaster, shoots down one of the alien spacecraft. The vehicle skids to a halt in the middle of town, and as the townspeople gather around to see what’s inside, they find that the answer is…

Nothing. There’s nothing inside. Maybe that’s the thesis statement, the pull-quote, the idea that I’m trying to get across about the movie as a whole: There’s nothing inside. The reason that the aliens have come to Earth is as flimsy as the reason their chests open up like cabinets to reveal their vital organs. A gigantic steamship is found in the middle of the desert, but serves no purpose other than being atmospheric. Lonergan has memories of a beautiful woman, but those memories are meaningless. Paul Dano (There Will Be Blood) stomps through the town, but is quickly forgotten about. A little boy waits for his father to return home, nobody mentions the missing man ever again. When I think about these things, I think maybe I’m wrong. Maybe the movie isn’t merely passable; maybe it’s totally awful. It’s like the filmmakers started with the title, worked their way backward from there, and gave up midway through.

There’s no follow-through? At the risk of spoiling the end of the movie for you, the film does not conclude with “And they all lived happily ever after.” Hell, it doesn’t even leave off with a sequel-suggesting question mark, “The End?” Instead, the remaining characters wander about and eventually off into the sunset. The aliens are, predictably, interchangeable and featureless. The human characters, though played by recognizable actors and given specific roles (e.g. “The Dark, Brooding, Amnesiac”, “The Nervous Bartender”, “The Little Boy Who Accompanies Them”), have little more personality than their CGI counterparts. It’s an action movie so bland it should be banned! I wish I had amnesia so I could forget this movie!

I can’t do it. I can’t make myself dislike the movie more than I do. I watched Cowboys & Aliens, it was a movie, and now it’s over. It didn’t do anything to offend me, it did nothing to excite me. It did nothing.