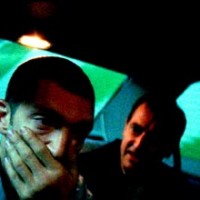 I get the feeling, reading through various reviews, that there’s this consensus about Irreversible that it’s alright to think of it as “that movie with the rape”. It’s true that it does include a pretty shocking rape sequence which the rest of the plot sort of hinges on, but I believe that thinking of the movie in those terms does a disservice to the film, which is actually so much more than that scene alone. And by the way, you’ve got to trust me when I say that if you haven’t seen this movie, telling you that there’s an important rape scene is in no way a spoiler.

What I’d rather focus on in this review is the thing that intrigued me the most about the film – something that most critics mention in passing and quickly lose sight of. Well, there are two things actually… they kind of go together, the way that I interpreted it.

In addition to the graphic nature of some of the imagery, Irreversible got a lot of press when it was released because of the way the movie moves. It has a reverse chronology, a la Memento, but unlike the Guy Pearce film, its transitions into the past are not underlined. What I mean is this: almost every scene in Memento ends with a tiny climax, unanswered questions that will be set straight in the next scene, a clear break from the future to the past. There is no question when one scene is over and the next one is beginning. In contrast to the Memento style, the way that Irreversible moves is much more fluid. It is often difficult to tell at first whether we have moved into a previous scene or still watching a later one play out. The sharp breaks are not there, giving the film a much more organic feeling – the editing is not visible, which makes the movie feel less like a series of different scenes and more like one long vision unfolding before the audience.

Which brings me to the second, and more important point. The A.V. Club’s review of director Gaspar Noe’s film scolds the movie’s detractors for dismissing it as “hollow provocation, a cruel and gimmicky stunt that operates like an arthouse crowd’s roller-coaster ride.” But then the review goes on to describe the opening scenes as “a near-literal descent into hell, with swirling camera movements and oppressive, bass-heavy sound effects that are designed to turn the stomach.” This, I think, is just a return to the idea that the movie is a cruel and gimmicky stunt – a sentiment that I disagree strongly with.

Okay, the bass-heavy opening scenes are said to have a frequency of 28 hz. This frequency is supposed to cause discomfort and nausea in the average person, so I guess there is some merit to calling that a “stunt”. Still, I think that the risk pays enormous dividends. Putting an audience in that sort of environment, where they are made uncomfortable by the sound and uncertain by the images… it puts them in the perfect place to be extremely affected by what happens. You are sickened, and only then does it begin getting sickening.

But that’s not the second point that I was trying to make. The second point that I wanted to raise is with regard to the filming technique. Noe’s camera functions in a way that I have honestly never seen in a film before. It swirls and turns and spins and careens this way and that without much thought for whether the viewfinder is focused on anything at all. Some scenes are shot sideways or upside down, or with a focus on one of the characters shoes, and so on. Maybe the camera will follow the characters as they are walking, filming them from directly overhead. My first thought was: “This gives a whole new meaning to the term ‘God’s-Eye’ view.”

That is the thought that got stuck in my brain, and it is what made me love the film. The movie is filmed from the point of view of ‘God’, a literal omniscient third. “God” is probably the wrong term to use, since the word carries with it ideas about omnipotence and intervention through miracles, the idea of a human-like soul that can be pleased or displeased with things that are done. As one character says at the beginning of the film, “There are no good deeds or bad deeds. There are just deeds.” All this viewer is, really, is an unblinking eye. An eye that is not encumbered by space or time. It is not limited by time, which allows it to move freely between scenes without making a big to-do about it. But more importantly, it is not limited by space – it has no real concept of up or down, and if it settles on an image (say, a person’s face), the eye must stay on that person or risk tumbling off into another scene entirely. Watch a wonderful scene where the camera leaves a police car, spirals backward with only an occasional street light flying by to give the viewer any bearing, and then thumps through the roof of an ambulance to take a glance at the occupants. It’s just astounding.

Here’s another moment I love, again pretty close to the beginning of the movie, so I don’t think it’s a problem if I tell you about it. The eye watches a couple of men talking in an apartment or motel room and they begin to hear sirens. The eye moves out of the building, down to the street, and sees a group of emergency vehicles congregated around a gay S&M club. Emergency technicians are wheeling an injured man out on a stretcher, hurling insults at the badly hurt man the entire time. The camera looks on dispassionately. But then, ah! The camera spies something of interest: the blue spinning lights on top of one of the police cars. We fly up until we are looking straight down at the spinning light – and then the camera begins spinning itself, trying to keep up with the light. This goes on for a few seconds until the eye gets bored with the game and returns to the action.

That’s the kind of thing that I’m talking about here. We are not merely watching images on a screen in the way that we would in most movies. Instead, we are literally put into the action – able to move freely (via our guide, the eye) in any direction whatsoever within the action. However, we are still removed from what is going on entirely… we are both there and not there. This thought brings forth another important aspect of Irreversible: the sharp dichotomy. I mentioned the spinning – watch for a similar spinning scene later on, and compare the two moments. Or how about this: in the beginning of the movie, two characters are seeking revenge for the brutal rape (we see actress Monica Bellucci’s bloodied face, but have not yet seen the actual scene). We are simultaneously standing behind these guys, hoping that they will give this guy what he deserves, and we are fearful because we already know what will happen. Later on in the movie, before any of the horrible events to follow will even take place, there is a sweetness behind the relationship between the girl Alex and her boyfriend. But this is tainted for we viewers by the knowledge of what is to come. It is in this way that Noe endows we viewers with a sort of omniscience. We cannot be in every place at one time, but here we are nonetheless. Every moment is new to us, even if it has happened long ago.

I am, like the eye, accidentally losing my focus. There are just so many things that I want to say about this gorgeous and painful film. It really saddens me that it is written off by so many as just a movie about rape. The movie is about nothing at all, and it is about so much more.

Irreversible is an extraordinary film.

One Response to “Irreversible”