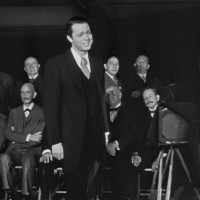 Orson Welles’ masterful 1941 film Citizen Kane is widely considered to be the best film ever made. Before we go any further, just stop and think about that: the best film ever made. Think about how many movies have been made in the last century alone, how many great films there are, and consider again that the first feature-length film from a 25-year old director is known – sixty years later – as the greatest film ever made. I don’t think you quite realize the full importance of the position this film occupies in the world. Going into the movie for the first time, having full knowledge of its notoriety, the question that must necessarily be answered is: does Citizen Kane live up to its reputation? Well, I don’t know if I feel comfortable putting the film on a pedestal above all others, but it is a remarkably vivid picture, expertly paced and magnificently constructed… and that’s just the plotting. Add to the mix a series of stunning monologues from largely unknown actors, plus cinematography and a directorial style which are breath-taking even today. I don’t know whether Citizen Kane is the best film ever made, but I can certainly see why one would feel that way.

The construction of the story alone is a marvel. The film begins with Charles Foster Kane (Orson Welles) as an old man on his deathbed, uttering that cryptic final word: “Rosebud”. It’s a quiet moment of solemnity, interrupted immediately by the booming voice of a newsreel announcer. In rapid succession, we are introduced to Kane – we learn everything about him, about the way that his life played out. We learn how he inherited a fortune, gave it up to run a newspaper, built another fortune from his own know-how, ran for political office, married twice, and maintained his riches through the Great Depression so that by the time he died, he lived in a fantastical mansion called Xanadu – rumored to house two of every kind of animal, along with enough paintings and statues to fill ten museums. This, a man’s life, all in just a few minutes. Then suddenly, the film sputters and shuts down to reveal a group of men standing in a smoky room. These are the staff of the Inquirer, the newspaper which Kane purchased and turned into a tabloid – a tabloid which the American public could not get enough of.

Kane made a success out of the Inquirer sometimes by forcing the truth. In a direct parallel to William Randolph Hearst (whom the character of Charles Foster Kane was largely influenced by), the newspaperman tells his staff to print news of a war building in order to make it a reality. So here is Kane’s final word, and the staff of the paper – now in the newsreel business – decide that everybody knows all of the details of Kane’s life already, so wouldn’t it make a more interesting story if the man’s final words harbored his very soul, meant something incredibly profound and important to him? Yes, Citizen Kane is the mother of meta. These men, for whose headlines reality grows around, set forth to find out the meaning of “Rosebud” by interviewing many of the major players in Kane’s life. But “Rosebud” is only important because the movie says it is. Kane is only important because he exudes an air of confidence that allows him to climb to the top with ease. According to the IMDb Trivia for the film, “When asked by friends how Kane’s last words would be known when he died alone, Orson Welles reportedly stared for a long time before saying, ‘Don’t you ever tell anyone of this.'” I can’t imagine why, because it seems to me that the word itself may just as well be as fabricated as the epic life of the man at the center of the film.

So like director Quentin Dupieux’s Rubber, the movie jumps in and out of its story – here flying back and forth in time, rather than literally breaking out of the movie such as in Dupieux’s film. It’s a thrilling set-up, exceeded only by the bravura of the film’s technical wizardry. Filled with dozens upon dozens of extraordinary images, Citizen Kane features a film technique called “universal focus”, allowing images in the background to remain in focus at the same time as images in the foreground. In one amazing moment from both an emotional and technical sense, we can see the young Charlie Kane playing in the snow outside through a window, while his parents argue about the direction the boy’s life shall take in the house. In addition, the camera moves through solid objects (tables, windows, etc.) with astounding ease for a film made at the tail end of the ’30s – exhibiting Welles’ penchant for spectacle in the name of his art. Perhaps it’s a movie more readily awe-inspiring for those who think about film often.

Where many might find humor in a scene that has Kane walk into the background, revealing a window which seems normal-sized at first to be gigantic, cinephiles are more likely to struck by the set-up and reveal, the mechanics of the scene. I could point to any number of other shots: a stormy night scene, the camera gliding through an opening in a neon sign and then straight through a solid glass skylight (-cough Gaspar Noe cough-); an image of Kane’s mistress fading into a newspaper photograph; the fantastic opening shot revealing a blizzard to be simply the contents of a snowglobe (-cough Tarsem Singh cough-); a director yelling “No, no, no, no!” and a zoom-out revealing a movie set being constructed from the ground up. Which, mind you, is not to say that the movie isn’t humorous. There are a ton of hilarious and quotable lines from practically every character. In one of the greatest, the Inquirer has two headlines set up after Kane runs for political office: one that reads “KANE WINS!”, the other declaring “FRAUD AT POLLS!” Always an exclamation mark.

I could go on. As soon as I got done watching the movie, I wanted to see it again. I wanted to understand it better, to see every angle and recognize all of the flair that Welles put into the finished product. I want to take it and look at it on a shot-by-shot basis, marvel at each frame and the delivery of each line. There’s no denying that Citizen Kane is a masterpiece. Well, as a friend of mine wrote about the film, “I suppose it’s possible to not like this movie, but I have never heard a good reason for it.” It’s a dazzling picture, a true five-star film – featuring practically perfect acting, writing, camerawork, editing. Rarely does the movie make a misstep. Once again, I don’t know whether Citizen Kane is the best film ever made.

One Response to “Citizen Kane”