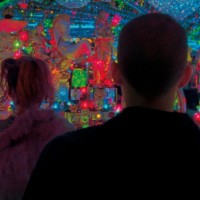 I famously gave Gaspar Noe’s previous film, the stomach-churning Irreversible five stars. There are a lot of critics of that film who wrote it off as simplistic due to the fact that the characters’ interactions are often quite poorly drawn. There are far more who objected to the film on the basis that it is a gimmick: the movie is notorious for featuring an extended rape sequence and begins with a low humming sound designed to induce feelings of nausea. I can see these criticisms, but they are all secondary to the magic that the film showed to me. Noe’s directorial style was literally unlike anything I had seen before. The camera doesn’t exist within the frame in the same way that the characters do, allowing the viewer to travel anywhere, anywhere, without any regard for what we would consider up or down, free to travel through both solid objects and time with ease. If the movie is indefensible otherwise, it’s a true masterpiece based solely on the fact that it offers a vision that incomparable in all of cinema.

Now we have Noe’s follow-up, Enter the Void, which takes everything that he began in the previous film and cranks it up to eleven. The things that some viewers found grating are only compounded here, but the features that make Noe’s work stand above all other filmmakers working today are commensurately enhanced. I didn’t always feel like this, though. I was an hour and a half in when I announced that Enter the Void was not very good. I greatly regret this. A commenter on the A.V. Club’s review of the film expresses the difficulty it takes to get through the first screening of Enter the Void: “I found myself really fed up with it around the 2 hour mark and was convinced it was crap but it somehow spun me round by the end.”

I saw Enter the Void twice in a row. I saw it in bits and pieces over several days, but then once it was over I immediately went back and watched it again. When watching Irreversible for the first time, it can be a sickening experience because you are unsure to what levels of depravity the movie is going to take you. Similarly, the first viewing of ETV was hard to stomach. There’s a moment early on where the main character, a drug dealer named Oscar, smokes some crack and goes into a hallucinatory journey through swirling, throbbing colors – it’s amazing, but seems to go on for far too long. Add to this the brutal despair that’s affecting every character, the traumatic events of their past, and so forth. It makes it a difficult movie to bear.

But that’s just on the first viewing. I’ve been asked multiple times why anybody would bother sitting through a film that makes the viewer squirm like that. It seems strange to have to answer the question, really. Why watch The Shining, Dancer in the Dark, There’s Something About Mary? These are all films whose goal is to elicit some sort of response from you, be it fright, tears, or laughter. Noe’s film doesn’t intend to simply force you to respond; its goal is to pull you into the action. And I meant that quite literally, as ETV is told almost exclusively from a first-person perspective. The movie is separated into three major acts. There is the first, where the viewer sees things through Oscar’s eyes – only able to view the actor when a mirror is present or when he’s experiencing hallucinatory out-of-body experiences through the use of drugs. After death, Oscar’s “soul” cartwheels through his life – we see major moments from his past, the camera situated just behind the actor. Finally, Oscar’s soul flies effortlessly through the city of Tokyo, gliding over the neon streets and through buildings, watching without emotion as the lives of his friends play out without him.

It will be difficult to describe the experience of watching ETV without being able to show you specific scenes from the film. The same raw power of Noe’s previous film is retained here, as the camera once again seems oblivious to the natural world around it. We’ll be watching from above as two characters speak with one another, then the camera will sling across the city – through buildings, across streets, through lights and signs and people, until it reaches another character that it wants to watch for a little while. In a particularly stunning moment later in the movie, the camera (I referred to it as “The Eye” in my Irreversible review, but I suppose I would be safe calling it ‘Oscar’ here) rushes up and above the city of Tokyo, looking down at the flashing lights the illuminate the metropolis all of the time. Oscar glances up to see an airplane rushing toward him, effortlessly sliding through the solid vehicle and viewing the passengers inside.

But it’s not just the visceral experience of the visual presentation that is so magnificent. Take, for example, the city of Tokyo. It’s easy to see this setting as another easy gimmick, bright colors to add to the acid-trip feeling set by Noe’s filmmaking style. But the ever-present lights do more than make the film feel trippy – they add to the claustrophobia and dread, a creepy flashing carnival atmosphere that permeates the characters’ entire lives. One memorable scene has Oscar and his friend Alex walking out of an apartment complex – they walk down darkened staircases, through dimly lit hallways, discussing the Tibetan Book of the Dead and what happens when you die, then erupt into the bright streets of the city. It’s after midnight, but the streets are lit as though it is the middle of the day. Can you imagine living like that? Further, there is an amazing focus placed on the way that the movie sounds. When we are in Oscar’s head during the first act of the film, everybody’s voices are slightly muffled. When he travels through the spaces between the physical world and ends up in lands of strobing colors, the sound buzzes and thumps like a heartbeat or lapping waves. There’s a lot of care taken here, an over-riding vision that informs the entire movie; the fact that that vision is clear throughout makes it obvious (to this viewer, anyway) that ETV is no more of a gimmick than its predecessor was. There are gimmicky facets, certainly, but overall they are used toward a larger purpose.

Still, I’ll admit that the drama of the movie – the story about Oscar and his borderline incestuous relationship with his sister Linda – is far from exciting. Their story is more interesting when you think of as just one bad thing after another piling up, rather than looking for some sort of moral to the whole thing. Perhaps, like a character in Irreversible states early on, “there are no good deeds or bad deeds… just deeds.” Similarly, perhaps ETV is not about what happens, but the fact that it happens at all. It’s about a man who dies, no, it’s about dying – we see Oscar’s death through his own eyes – and subsequently see everything he did wrong or right in his life – only to end up watching the people he knows go on without him, totally unable to do anything except for start it all over again.

Enter the Void is not perfectly rounded in every aspect of its production, most notably lacking in the acting and story. But its goal, the thing that makes the movie work at all, is more on being an experience. Noe’s work is rarely something you watch, but instead something to endure, a journey to travel through, and yes.. a trip. There is nothing else like this. Noe has reportedly been developing this film for upward of fifteen years, and like Tarantino’s years-in-the-making Inglourious Basterds, that dedication really shows.

Enter the Void, like all of Noe’s work, is not going to be accessible for everybody; I spent some time feeling disappointed by the movie and so I can definitely understand why there are those who will feel that way. But those for whom the movie connects will find an immense joy from a film otherwise soaked in misery.

One Response to “Enter the Void”