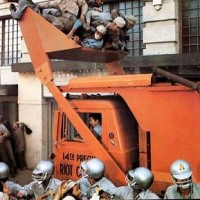 Recently, somehow, the curious nagging feeling that meat is murder has crept into my mind. It’s actually an opinion I’ve held for some time now, but much as with any number of New Year’s resolutions, it was a high-minded ambition easier to commit to in theory than in practice. I know I should run daily to burn off this extra 50 pounds I’m carrying around, but staying inside watching television is so much easier. Likewise, I know that meat is the corpse of an individual animal killed for consumption. And yet, well, I mean… how can I give up hamburgers, or ham itself for that matter?

Nevertheless, sometimes lately when eating a big chunk of flesh, I’ve begun to feel a bit repulsed. It’s particularly when it is visually evident that the meat I’m chewing was once a living being, but it’s there. That feeling has sort of renewed in me the desire to transition into a meatless lifestyle and consequently I’ve been thinking a lot about the ethics of eating meat. Somehow while considering this the neurons in my brain fired in such a way that Charlton Heston’s infamous cry from the finale of Soylent Green came to mind: “Soylent Green is people!” Uh, spoiler alert I guess. I was only familiar with the movie from the ubiquity of that particular line of dialogue, so I made up my mind to give it a proper viewing in order to see if perhaps it was a clever allegory about the error of our meat-eating ways. Perhaps by “people”, I mused, the film intends to suggest that eating meat itself is morally objectionable.

I can now report: that doesn’t seem to be the case. The film predicts a 2019 New York City baking under the harsh UV rays of a sun that has pierced the ozone layer completely, its population in extreme want because of overpopulation and American overindulgence. Its world’s destruction is entirely man-made, and there is likely a strong argument that the green chips of manufactured foodstuff (which, again, is literally made from human beings) do in fact represent the threat of climate change, of overpopulation, of the police state, or any number of issues. Through soylent green we are truly destroying ourselves. It’s not a metaphor the movie takes pains to make obvious, but one wouldn’t be stretching too hard to get there.

The people-is-meat angle, though, is a nonstarter, judging from the way the characters and the camera seem to revel in the sight of a cut of marbled beef. Having actual food, as opposed to chips of foodstuff, is a sign of opulence and luxury in this world. A central scene has Heston, a cop who doesn’t play by the rules!, dining with his live-in mentor (Edward G. Robinson) on some food he’d stolen from a crime scene. There is no indication that their delight in the meal should be read as anything but sincere.

Well then. With that angle on the movie shot, what else is there? Despite how well-known Heston’s final line has become, the movie isn’t really so much about soylent green itself—or, rather, only tangentially. There is a lot of gumshoe work and run-ins with the henchmen of corrupt businessmen on the way there. In fact, the bulk of the movie lies in Heston’s clenched-teeth as he argues with his supervisor about the direction of the case, or in his dalliances with Shirl (Leigh Taylor-Young), who plays the “furniture” (i.e. concubine) attached to an upscale apartment. Though the movie certainly has several scenes which exhibit the despairing state of the world at large, mostly it’s set dressing for the smaller story of a man inexplicably drawn to pursue the threads of a convoluted mystery. But even that is given short shrift in the end, as he doesn’t so much untangle the clues to get to that shocking revelation as get a peek at a cheat sheet, so to speak.

There is actually a scene late in the movie in which our hero Heston has cunningly crept into a Soylent branded factory and witnesses the process occurring. We the audience view bodies wrapped head to toe in white sheets, so as to be indistinguishable except as vaguely humanoid shapes. They slide down a conveyor belt into a large vat of liquid. Heston’s character moves around to the other side of the machine and a layer of those green chips pops out from the other end. And that’s it. Heston’s character is horrified, as one would suspect, but as a viewer I was left wanting. I’m not necessarily saying that the movie needed to show the transformation from cadaver to caviar in gruesome detail, but that it failed to elicit in me any of the outrage or visceral disgust that it ought to have.

Again, a credible argument could be made that that was part of the point. When Heston makes his famous declaration while being taken out of a community shelter by medical personnel, there is little reaction from the assembled crowd. Perhaps the fact that the news seems to be taken in stride by those around suggests that the terrible has become routine, or mundane. Still, given that Heston’s character is sort of our avatar in this world as the protagonist, and given that he is shocked by the revelation of soylent green’s true nature, I’m not sure this reading is fully justified. So I return to thinking that the turn in the story was simply handled poorly.

I wanted to see blood, figuratively. Using the above discussion of meat-eating as analogy, I needed Soylent Green to show me the bones, the veins, the fat and sinews, all of those things that remind me that I’m eating something living. I needed that revulsion, that visceral reaction that makes me stop and consider my choices. I wanted Soylent Green to affect me. Instead, it’s plain and bland, packaged as a conventional political thriller—albeit one set in the year 2019—and one whose last-minute pivot into a “Twilight Zone”-esque twist ending utterly fails to evoke any resonance. Even though I know there’s something underneath, something that could have grown if it had been given a chance to breathe, what was served instead has been ground into something basically inoffensive.