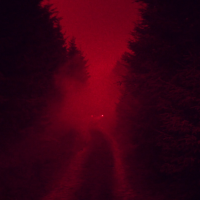 The best way to watch Mandy, I think, is without blinking.

The more you stare at it, the more you focus so intently on the images on-screen that they start to lose shape, the more you will get out of it. I’ve read a few reviews of the movie from other, lesser websites. They invariably describe the plot of the film, which feels a bit like false advertising. Yes, there’s a story to the movie, but its power comes less in the narrative it treads than in the unsettling mood it projects. To me, the closest analogue is Gaspar Noe’s Enter the Void. That film also had a story, such as it were, but the real draw was the intensity with which it put the viewer into the action, to the extent that the audience takes the place of the main character as he is killed.

Mandy isn’t the same feat of ingenuity that Noe’s film was, but it nevertheless will claw its way under the viewer’s skin if allowed to. Nearly everything in the movie is tinted in dark red, which not only lends an eerie vibe to the whole endeavor but also makes everything run together, bending the space between the real and surreal. Secondly, a great deal of the dialogue is whispered. There’s a couple lying in bed, whispering haunting memories to one another; there’s a woman whispering the words of a book she’s reading (half-sentences about a malicious serpent, naturally); there’s a demented cult leader, whispering his egoist philosophy to a captive. Additionally, the movie frequently has its characters stare directly into the camera as they whisper their terrifying secrets. Looking deep into their eyes while they, tinted crimson, whisper snips and pieces of horror language at you, can begin to feel hypnotic.

It is worth nodding toward the plot, if only to provide context to the appreciation for Nicolas Cage I’m about to lay down. I have a relationship with Cage: for a good stretch there in the middle-teens of the Century of Our Lord 2000, I could honestly say I had seen all of his movies. It started in jest, but grew to sincerity, and then waned back toward the mere desire to be a completist when the quality of his later work dipped. I’ve not watched several of his more recent films and only gravitated toward Mandy because I had heard that it included “crazy Nic Cage”, which can be a hoot. There are flashes of that, certainly, as the movie introduces some intentionally comedic elements to lighten the mood some. But arguably the most intense “crazy Nic Cage” moment in the film is also the most emotionally compelling.

Cage and his wife, Mandy (Andrea Riseborough), live quiet lives in the woods of the Pacific Northwest until the aforementioned cult leader takes an interest in Mandy. When she rebuffs his advances, his minions torture Cage and murder his wife in front of him, leaving him for dead afterward. When he manages to stumble to his house, he sobs, he hollers. He screams. The camera shoots him from afar, standing in just a t-shirt and underwear, guzzling a bottle of hard liquor to ease the pain and erase the memory. Yes, it’s Nicolas Cage thrashing around and over-acting and on one level that’s him being weird and giving the people what they want, just as the chainsaw fight later in the movie is obviously just playing into a sort of self-aware grindhouse mentality. But also, it’s entirely appropriate given the situation the character finds himself in. It makes sense for him to stumble around in a daze, to be overcome with grief and rage. The way the camera lingers on the scene, unblinking, makes for a voyeuristic feel. This performance is so raw, it begins to feel uncomfortable, too intimate. It is a stunning reminder of what the actor can accomplish when he aligns with a role.

I used the term “grindhouse” above. It’s worth noting that there is an intentionally retro aesthetic to writer/director Panos Cosmatos’ work; on top of the blood-colored tinting, there seems to be a grainy film over the images on-screen. It’s a very individual style that makes his two movies (Beyond the Black Rainbow is the other) unmistakably his. Perhaps the fact that the film consciously pays homage to genre films of the past helps to excuse some elements that strike me as problematic. I understand that this is a horror movie and a certain amount of gore comes with the territory; in the movie’s defense, despite the buckets of blood that end up flowing before the credits roll, a lot of the violence is suggested rather than shown. Nevertheless, the movie lingers on the fact of the violent act in a way that feels too celebratory.

As an example, take Mandy’s death. Again, I understand the idea being communicated. I understand that the scene defines the depravity of the antagonists, that it heightens the righteousness of the vengeance Cage’s character seeks by making him witness to the killing. But the moment lasts so long that it begins to seem that the movie is reveling in the cruelty. I imagine that the counter-argument may be that even if it is, it’s doing so with a critical wink, rubbing the audience’s face in the horror in order to make clear how bad the behavior is. Without getting too far down a rabbit hole, I have come to believe that anything that relies on its audience to pick up on the nuance of a message to get the meaning – particularly when the message flirts with some social ill as a means of criticizing it – is at best a misstep (at worst, a charade). For that reason, I do have some reservations about the movie.

With that caveat stated, the elements that draw me in are more resonant than those which break the spell and make me uneasy. Mandy isn’t meant to be mass-consumed. It’s peculiar, and requires a patience and focus that most will be unlikely to give it, but it has a vision. Whether it fully works – and I think it does more than it doesn’t – it has a strong sense of itself; it is unashamed. That confidence makes Mandy entrancing.