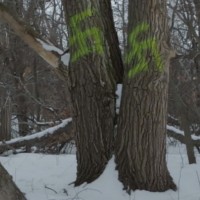 The residents of the tiny town of Leith, North Dakota, are introduced to viewers as good ol’ down-to-earth Americans. They came there for the privacy, convinced themselves they adore the endless expanse of plains, and settled into a friendly, tight-knit community. It’s one of those places, like the song says, “where everybody knows your name.” It’s a wonder the houses don’t all have white picket fences, the better to signify the inoffensive charm of the place. Alas, soon the residents’ humble existence will be punctured by the intrusion of white supremacist Craig Cobb, who begins snatching up vacant properties with plans to create a racist paradise. A Shangringo-la, if you will. The good folks of Leith won’t stand for it. The battle has begun.

Intriguingly, the documentary Welcome to Leith seems, at times, in opposition to the residents.

There’s no mistaking Cobb’s vile behavior, of course; by simply recording his statements, the movie builds its case against him. For most, a case against a well-known white supremacist, monitored by the Southern Poverty Law Center and known for inciting others to violence, need not do much persuading. Nevertheless, Cobb proves himself despicable at every turn. Whether it be challenging the father of a murdered teen by accusing him of causing her death, condescendingly ordering the one African American resident of the town around, or proudly identifying himself as “one of the most famous racists in the world world,” he never fails to appear anything but fiendish. Yet it’s clear Cobb is nothing but a provocateur—a gratingly effective one, no doubt, but a nuisance more than a threat.

Others who subscribe to his poisonous philosophy might be more of a threat. One of his supporters, Frazier Glenn Miller, was driven to shoot innocents at a Jewish Community Center in Kansas City because of how deeply his mind had been warped by Cobb’s brand of fanatical malevolence. But the lone hanger-on who joins Cobb in Middle of Nowhere, North Dakota, is Kynan Dutton. Dutton moves his wife and child to Leith and seems intent on making a go of it there. Give or take a screaming match with residents at the town hall, Dutton seems remarkably normal. He works on his home. He and his wife encourage their son in school. Even his defense of the National Socialist Movement is measured. Were it not for the hatefulness it actually represented, one might be forgiven for thinking Dutton is not… all that bad?

In contrast, the townspeople are shown conspiring on schemes to rid themselves of Cobb and his ilk. They glare at him angrily when he drives by, threaten him with violence, swear that they will never let him live comfortably in their town. People drive by the Duttons’ home hurling obscenities. They come on their property and vandalize their vehicles. The residents come together to formulate a plan to invent new zoning regulations to prohibit Cobb from moving forward with any new construction. They may or may not have banded together to commit perjury in hopes of extracting Cobb and company from their town. And in one of the most disturbing moments, they gleefully come together to burn down his home (under the guise of demolishing a condemned property).

As a viewer, it’s impossible not to see the parallels between the way the townspeople are reacting to Cobb and Dutton, and the way groups like the KKK have historically treated minorities. Were the residents aware of the dark irony in their behavior? Were they soothed by convincing themselves “turnabout is fair play”? Does the end justify the means? That is, are they justified in waging war against Cobb because their cause was pure? There’s another line of thought the movie seems to want to follow regarding the limits of the First Amendment. It seems to want its audience to consider whether it supports the wide latitude granted by the Bill of Rights with respect to free speech—so wide that it might permit self-proclaimed white supremacists to parade around town with shotguns drawn—or whether they would feel comfortable with Benjamin Franklin’s Faustian bargain of giving up a little liberty for a little security (security from neo-Nazis, in this case). That’s a fine line of thought and all, but I’m still gripped by the more basic moral question: what, if anything, distinguishes the vengefulness of the people of Leith from those against those whom they were, uh, venging?

Or perhaps the two questions are intertwined. If we’re heading down a path of considering what the First Amendment ought to allow, we need first determine by what metric we can judge appropriate actions. The problem with slashing a man’s tires and burning down his home is the very real possibility that, in turned tides, your own home could meet its match. Sure, it’s easy enough to say that your goals are good and that of white supremacists is bad (and I won’t argue with you on that point), but the question is how do you decide that the way to repay a bad position is by slashing tires or burning down a house? I’m not convinced there’s anything that separates the two. I am of the opinion that it is the action that is moral or immoral, and the motive supporting it is inconsequential. If you proclaim that your motive, being good, grants you authority to commit foul deeds, it gives credence to the next person to say, “Hey, well, that guy did it first.” That person believes their motive is more just, more well-reasoned, or more divinely-sanctioned than yours: now you’re on the receiving end of the stick.

I guess what I’m saying is do unto other as you would have them—no, no, it’s more than that: do unto others as if you were doing unto yourself. The “golden” rule falters because it is too dispassionate. It’s the same way people can hear about a crime victim and think, “Well, if I were in their situation, I would have fought back.” It’s thinking about how you would want to be treated, but only in the abstract. In the abstract, you hold yourself to much higher ideals. If I may speak metaphorically: when you actually face the guillotine, you’re less comforted by the fact that you had a “fair trial” than you would be were you but a juror.

All of which is not to say that the people of Leith are just as bad as Cobb and his allies. But the movie captures a moment when the lines get blurred. In the split-second when the match is tossed on the kindling, everything else falls away and all that exists is that moment, that action, that choice. There’s arguments to be made that Welcome to Leith as a documentary lacks a strong through-line, as a film lacks a satisfying conclusion, as an exploration of these individuals’ motives lacks the insight into their train of thought that viewers might have preferred. But as a snapshot of a brief moment when a community, gripped by terror (whether real or perceived), reacted in a manner that inadvertently gave fuel to its enemies, the movie is disquieting. The question a viewer asks him or herself throughout is, “What would I have done?” Though you might tell yourself you wouldn’t have gone to the lengths the Leithpeople did, ultimately there has to be a note of uncertainty in your answer. At the very least, would you recognize it when it happened?