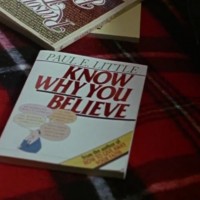 “Believing is the first step, my friends…”

About a month ago, I watched Rick Garside’s Thin Ice. From the trailer, it appeared to be a Christian ’80s ski movie, complete with gnarly guitar riffs over the action, and that enticed me. I didn’t end up writing a review/recap for it, though, because it turned out to be a lot more even-handed than I had expected. Oh sure, it had its moments of dull cliche (e.g., a girl who is mad at God because her father was killed by a drunk driver, the miraculous answered prayer in time of physical danger), but for the most part it treated all of its characters humanely. It was the kind of movie where each of the Christian characters apologizes at some point upon recognizing he or she is not living up to the standards he or she sets for others. It didn’t make me laugh much, and it didn’t make me angry. It was as close to an honest portrayal of human beings that the genre is capable of producing, even if the protagonist, Vince, is inexplicably turned by the end.

Its sequel, On the Edge, is everything that Thin Ice was not. Its theological arguments are blunt and in-your-face. The characters do apologize to one another, and [SPOILER] the non-Christian surprisingly remains unmoved at the movie’s end, but the catharsis that’s meant to come from the characters agreeing to stay friends doesn’t feel earned. It’s too tidy, after the movie pummeled viewers with weak theological arguments for the previous 55 minutes.

This movie picks up right where Thin Ice left off, with Vince returning to his college dorm after having surrendered his life to Jesus. His roommate Ross is not having it, and they get into an argument about God’s existence. During this argument, Vince implores Ross to look outside because “everything shows design” and could not have been an accident. In response, Ross throws an empty beer can at a stack of cans near his bed, sending them tumbling, and calls its accidental modern art – design by accident. Vince counters, “But you had to throw the can!” It’s the ‘Watchmaker’ argument (somebody invented watches, so somebody had to have invented rocks), but it’s poorly applied. Even if Vince is right, that somebody had to throw the metaphorical beer can to create the universe, that doesn’t make the resulting mess any less of an accident. At most, his argument supports a deistic God who stumbled into creating the universe like a primeval Buster Keaton.

Ross ends up challenging Vince to prove that God exists, which Vince accepts. To settle the bet, though, Ross has to go on a hiking trip through Yosemite National Park with the lovable goofballs from Thin Ice. So, fine, okay, they go out to Yosemite and there’s youthful hijinks aplenty. The girls put rocks in one of the boys’ backpacks so he gets worn out from the heavy load. The boys play with sticks like they’re swords. When they get to the top of a cliff, Vince and Ross look out over the majestic view. “How could an explosion make all this?” Vince wonders aloud. To Rick Garside’s credit, Ross’ sarcastic answer is appropriate: “Maybe if you took Earth Science, you would learn a thing or two.”

But here is where Xalton (yow, what a name), one of the other Christians on the trip, comes to offer his take on the topic. He argues that science does not conflict with creation until science “steps out of science and into theology.” Your guess about what that means is as good as mine. He goes on to say that history is full of God’s interactions with people. We have witnesses, you see, and that’s the best evidence you can get. What he doesn’t acknowledge is that witnesses are notoriously unreliable, and undoubtedly moreso when they’re being coached- like, from childhood, by their parents and communities – to interpret every stubbed toe as God’s voice.

Ross is unimpressed. The Bible is just a book, he says. “Just a book?!” Vince and Xalton shriek in unison, probably. Xalton has got to correct this heinous misinformation. He explains to Ross that the Bible was written over a period of 1600 years by more than 40 different men (I do appreciate that he was precise there and didn’t say “people”), but is consistent throughout. I really don’t understand how people like Xalton expect others to fall for that “consistent throughout” line, but it’s not an unusual argument. It almost goes without saying, but this is transparently false. There are two different flood stories in Genesis, for cryin’ out loud. The Bible is riddled with contradictions. Ross has the tiniest bit of fight in him and questions how it can be so consistent given the innumerable interpretations. “Don’t hold different interpretations against the Bible, Ross,” Xalton chides. Well, why not? You were just crowing about how it’s so consistent… why can’t we expect consistency where it really matters—in the meaning? Xalton continues, arguing that “most” “experts” agree on “all the major points”. And what points are those, Xalton? He also claims that there have been copies of the Bible written in different languages and years apart, but they are all say the exact same thing. Again, this is obviously false; it betrays a gross misunderstanding of how language, you know, works. There is simply no such thing as a one-to-one translation.

Later in their climb, Ross (for whatever reason) is a little more open to the God hypothesis and agrees that, upon seeing the gorgeous vistas at the top of the mountain, he comes close to believing. But he’s got a more specific question now: why Jesus? Why not one of the other hundreds of religions? Vince’s answer is astonishingly oblivious: because Jesus said so. You heard that right. Jesus said “There is no way to the Father except through me,” so, you know, there you have it. Next question. Again, it’s hard to fathom, but these arguments are all commonplace from evangelizing Christians. They’re shocking in how limp they are, but they’re far from unusual. It will probably not surprise you that the movie throws in Pascal’s Wager for good measure.

Okay, just one more. Ross seems a little more open to the possibility of God’s existence, but he’s still stuck on the whole “why Jesus” thing. Come on, Ross – what about “Jesus said so” don’t you understand? The goofy former-stoner of the group answers his question by poking holes in burnt pancakes and placing them on his ears. He explains that a person might believe wearing ear-pancakes makes them safer, and you can’t argue that they don’t actually feel that way (can’t you?), but it’s still a crutch. On the other hand, “the fact is,” Jesus rose from the dead—even his critics can’t deny that. Allow me to counter… [cracks knuckles] I deny that. In fact, I guarantee you that all of “his critics” deny that. Nonetheless, the question remains: so what? Let’s say Jesus rose form the dead. What does that prove? If some parlor trick is really the best God can do, he’s not much of a God.

Which brings me to the quote I shared at the top of this screed. There’s an image early on in this movie which caught my attention immediately, and which I’ve captured for the thumbnail accompanying this review/recap/rebuttal. Vince has a book on his bed entitled Know Why You Believe. It struck me because a Christian friend shared a link on social media recently and wrote the quote at the top of the page: believing is the first step. But that’s exactly backward! Believing is the last step. Otherwise, you end up reading books called Know Why You Believe. You end up making arguments so jaw-dropping in their senselessness that it’s embarrassing. But there is no way to the Father except through just deciding to believe. Nobody was ever reasoned into Christianity. Based on Thin Ice, I know Rick Garside has it in him to write a compelling, challenging movie, even if it is rooted in lame theology. But this isn’t a movie for somebody who’s intellectually curious, or the least bit rigorous in their beliefs. It’s tailor-made for the easily swayed. Its blissful ignorance isn’t the least bit charming. I’m very disappointed.