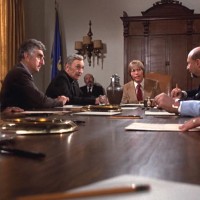 Well, well, well. The last entry in THE LETTER GAME was written 32 months ago. It seems about time to move forward, doesn’t it? And what better way to follow up a heavy documentary about the inexplicable depravities of man’s soul than a goofy feel-good flick that tells us everything’s gonna be a-okay?

It will come as no surprise, but the God (George Burns) of Oh, God! doesn’t bring up the Holocaust once. He’s focused on the positive, and the message he wants to impart to the world is: “You have everything you need to succeed.” That is, he’s not saying the world definitely will or will not solve its problems – only that it’s, theoretically, possible. Hoo… ray?

As a matter of fact, the God of Oh, God! is most like the god of deism, somebody who set the wheels in motion and then mostly backed away to see how it all panned out on its own. He says he’s responsible for the big picture stuff, not the details. He doesn’t engage in miracles, but by choice. He’s kind of fuzzy on the reasons, and even fuzzier when his anointed spokesperson, Jerry Landers (John Denver, he of “Grandma’s Feather Bed” fame), asks why he can’t simply reveal himself to the world at large and be done with it. “It’s a policy of mine,” God explains, vaguely. It’s probably a fool’s errand critiquing the theology of the movie, given that its representation of God is cinematic mush. He’s an inoffensive God who is charming, funny, and huggable – far from the wrathful, jealous, schizophrenic God of the Bible. He’s ceremonial deism brought to life, the God of the Pledge of Allegiance and the one whom we trust with our dollar dollar bills. He’s “good thoughts” wrapped in the cloak of a deity. He’s spiritual, not religious.

The movie itself follows a path that has become well-trod. Maybe it was fresh in 1977, when the movie was released (amazingly, unseating Star Wars from the #1 spot for a week). Denver receives an invitation for an “interview” with God early on in the film, which he throws away. It returns. He tears it up. It returns. Yawn. Unless Oh, God! was the first movie to play this game, in which case… no, no, still ‘yawn’. This isn’t fun. After some hi-jinks involving an elevator that always goes to the 27th floor, the game is set: Landers, who isn’t particularly religious, will be God’s unwilling mouthpiece—God flashes a bit of lightning to threaten what might happen to him if he reneges on the “deal”—to spread his message of goodwill (“meh”-will?) to a few million people in Southern California.

Landers’ wife Bobbie (Teri Garr) is upset and confused by her husband’s seeming insanity and single-minded commitment to a purpose he can’t fully explain. Garr plays essentially the same character in Spielberg’s Close Encounters of the Third Kind, released in the same year. I found myself longing for the movie to treat its characters with the seriousness of Close Encounters, to draw in the focus on how Landers’ ridiculous delusion was tearing his family apart. Garr does all she can with what she’s given, which isn’t much, but the movie is more interested in John Denver’s goofy antics. If only I had a nickel for every time he flashed a big grin and insisted, “I’m not crazy!”

The centerpiece of the movie comes when Landers takes his claims to a university’s theology group so they can “verify the miracle.” Incidentally, this theology group is led by a flamboyant Southern evangelist played with screaming delight by Paul Sorvino, who seems to adhere to the philosophy that you’re not really acting unless you’re over-acting. Sorvino’s character is the only one of the group who is identified as a fraud, though they all are. I guess even in 1977 America, calling out circus tent preachers was permissible. They were the Scientologists of their day. The group gives Landers a set of 50 questions (written in ancient Aramaic!) and locks him in a hotel room so he can ask God to answer them. They’re all heady stuff like, “What’s the meaning of life?” When God inevitably answers them, his answers are all easy-to-digest platitudes like, “Whatever you make it!” But this is the movie in a nutshell: George Burns and John Denver having a gleeful chat, recitation of unchallenging religious discussion (In answer to a question whether Jesus is the Son of God: “Buddha was my son. Jesus was my son. You’re my son.” See? Everybody’s right and everybody gets to feel good about themselves!”), and the occasional God-based joke (when they finish writing answers, Landers sighs, “Thank God!” Har har har har).

None of this appeals to me. And it’s not just because I can’t get past the logistics of it, although I am still scratching my head at Burns’ weird day-age explanation for creating the world in six days (or rather, day-a-few-decades?). I’m just not inherently delighted by George Burns, or by vaguely positive vibes. The movie doesn’t sell its premise at all, instead expecting natural affection for the actors and acceptance of the occasional winking humor to carry the weight. It feels so much like it’s merely going through the motions, re-working scenes and ideas that have been done to death. Perhaps it was all inventive and new at the time it was released, but it’s hard for me to envision a world where John Denver handing a newspaper reporter a business card that reads simply “God” as proof of his divine revelation reads as anything but very mildly amusing.

Yet that’s what the movie is all about!  It’s amiable, but it’s aimless. It’s enjoyable, but it’s empty. It’s light on humor, drama, significance. And what’s worse, that seems to be exactly what it was going for! In the end, I cannot recommend the movie. It hits its target, yes. But its target is a mile wide.