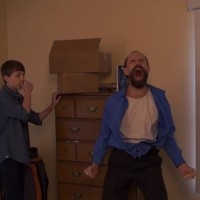 It’s true that Donald James Parker and Chip Rossetti, the writer/director duo behind Gramps goes to College, are the minds behind The Unexpected Bar Mitzvah (or, as I’ve just now decided to refer to it from here on out, The Unexpected B.M.); however, their involvement was the furthest thing from my mind when I decided I desperately needed to see this movie. Instead, my eagerness derived from one thing: Rich Swingle. You see, Swingle–a sort of effeminate, bargain-bin John Malkovich–has some incredible moments in the film’s trailer, his crowning achievement being the moment he melodramatically announces that he’s going to have a heart attack and rips his shirt open. It left me in stitches, and I had high hopes that The Unexpected B.M. was one of those diamonds in the rough, a Christian film of the so-bad-it’s-good variety rather than merely bad.

At the start of the film, it appears that it’s going to live up to my expectations. Stephen and his son Paul, a Christian father and son, are watching Tim Tebow play football on television when Paul says to his father: “I think God is helping Tebow. Why don’t the announcers bring up that possibility?” His father considers this for a moment and declares that he’s not comfortable saying that God is helping the millionaire play a game whose sole value is mindless entertainment, but will concede that God anointed Tebow to, and I quote, “attract the attention of boys like you.”

Meanwhile, Swingle, playing a Jewish father named Micah, has a parallel discussion with his son, Abe. “If I hear any more about Tim Tebow, the television stays off!” he bellows, upset because he perceives any Christian evangelism as an extension of the Holocaust–they’re just trying to rid the world of Jews, just like the Nazis did. Nevertheless, Swingle decides to move his family from Washington to South Dakota, in order to take a teaching job at a private college conveniently run by Stephen the Christian. Even more conveniently, Paul has recently expressed his interest in witnessing to the Jewish community, which didn’t exist in their small South Dakota town until the Swingles moved in next door. This is the kind of town where a bully earnestly sneers: “I’ve never seen a real Jew before. I think I can kick his butt on my own.”

Not to get off-track here, but prior to the Swingles moving in, Paul read a book about the Holocaust and asked his mom why God allowed it to occur. His mother initially goes to that old standby free will (“I guess [that is] the standard response”), but when he presses her on it she refuses to elaborate, saying instead, “I’ll let God answer. And when he provides an answer, will you let me know?” I’ve been bothered by this sort of exchange before in a Christian movie, something where one character brings up a weighty question and another character evades answering. I don’t understand it at all. It’s not as though The Unexpected B.M. made itself; Donald James Parker chose what to include in the script, and if he is at a loss when it comes to explaining the Holocaust within the framework of his religion, he could have left that out of the movie entirely! Why even include this awkward evasion at all?

In any case, even though Abe is forbidden by his father to know anything about Jesus, he begins having strangely specific dreams that suggest Jesus is trying to reach out to him. For instance, despite having never seen a Nativity scene before, he has a dream about one. In another dream, he is given a specific verse in the New Testament that he could not have known. He believes that it’s impossible that Jesus could be reaching out to him through his dreams. Paul’s advice: “Search with your heart, not with your logic.” Yep, that sounds about right. Finally, after abandoning his logic, Abe receives a message from God – like, a literal booming-voice-from-the-sky message – that he should stop reading Harry Potter and begin speaking in tongues.

I want to stop here to point out two things about the boys’ rooms. First, Paul has a Tebow poster on his wall which has been affixed with a handwritten note that says “In Tim We Trust”, an obvious play on “In God We Trust”. Doesn’t that amount to idolatry? At the very least, it seems he’s being pretty flippant about interchanging God and Tim Tebow. Even more bizarre is Abe’s room, which has a poster for the movie Walking with Dinosaurs 3-D, and which prominently indicates that the movie is being released on CHRISTMAS. His father is so unabashedly anti-Christian that he describes South Dakota as a “war zone” and flips out whenever Tim Tebow’s name is mentioned… so how is he okay with his son having a poster that says the word CHRISTMAS in bold white letters? Moreover, the title of the movie on the poster has been partially obscured by newspaper clippings – I assume by the filmmakers trying to, um, partially hide it from view. But WHY? If this is a movie set, why put the poster up in the first place? And if, as is more likely, you’re actually filming this movie in a young boy’s bedroom, how difficult is it to take the poster down for the length of the shot? Then again, if director Chip Rossetti cared about anything more than pumping this garbage out regardless of quality, he probably wouldn’t have directed fifteen movies in the last two years.

Anyway. Paul is initially reluctant to agree to Abe’s God-given demand to abandon Harry Potter, despite Abe’s ironclad argument: “Maybe Harry Potter isn’t make-believe to God.” Like, maybe God is a character in the Harry Potter universe? Paul seeks the counsel of his friend Sarah because of the difficulty he’s facing in deciding whether to accept Abe’s directions from Jesus or the religion his father taught him. One side says Harry Potter is okay and speaking in tongues is of the devil, the other side says that speaking in tongues is godly and Harry Potter is of the devil; they can’t both be right. Sarah says the wisest thing in the entire movie: “But they could both be wrong.” A round of applause of Sarah, ladies and gentlemen.

That answer isn’t good enough for Paul, who decides to go to an Assembly of God church – this is apparently something different than the type of Christian he is – and asks to be lent books about the Baptism of the Holy Spirit. The movie assumes its audience knows what this means, but I’m kind of at a loss… I think it just has something to do with speaking in tongues. The pastor of this church speaks words that are total insanity, warning Paul: “The Baptism of the Holy Spirit is not a toy to play with to get some kind of spiritual or emotional high.” They’re talking like this is something that is real and not make-believe like Harry Potter. It’s flabbergasting.

In the meantime, Abe has come out to his father that he has become a Christian, or rather that he is now a “Jew for Jesus”, which is totally something different because he says it is. This leads to the aforementioned overacting by Rich Swingle, which continues to delight me. Abe’s mother: “We’ve only been here 5 days. How could you be brainwashed that fast?” Good question. Swingle decides to send his child to New York to live with his brother (Donald James Parker himself!) to be brought back in line with traditional Jewish thought. Unfortunately, Abe begins literally frickin’ healing people in New York, including eradicating the multiple sclerosis of a wheelchair-bound cousin. That’s right: Donald James Parker can’t muster the ability to explain how God and the Holocaust can exist at the same time, but he can throw in a 12-year old miraculously healing people as “proof” of Jesus. Very compelling.

Paul, having been convinced by the Assembly of God books he’s checked out, begins to question his father’s belief that speaking in tongues is of the devil. How did he come to that conclusion? Well, Stephen explains, “I read books with logical arguments about why the gifts of the Spirit ceased with the apostolic age.” Logical arguments… riiiiiiight. In any case, after hearing about Abe’s miracles in New York, Swingle decides to give this New Testament thing a try and finds out he really digs it. When he gets done, he says, “I know Jesus is the Son of God.” Wow. Stephen is still not sold on the whole speaking-in-tongues-being-cool-with-Jesus idea, but his mind is changed when Swingle asks this piercing question: “What if you’re wrong?” Damn, if that doesn’t immediately make a guy re-think his entire belief system, nothing will.

In the end, because the New Testament doesn’t say the phrase “sprinkle baptisms”, the families both decide that they’d better to a full immersion baptism–you know, just to be safe, so that God doesn’t send them all to Hell. Moreover, the Swingles happen to find a church nearby that combines the best of both worlds, the Jewish faith and the Christian faith, so they can attempt to beat the house on Pascal’s Wager. What this means is that even though Abe is now a Christian (er, excuse me, a “Jew for Jesus”), he can still have a bar mitzvah! Not only that, but Paul is also going to have a bar mitzvah! Now that truly is an unexpected B.M. Furthermore, formerly-stricken-with-multiple-sclerosis cousin is moving to South Dakota so she can date Paul. Gee whiz, that’s great. And for those of you keeping track at home, that’s another unexpected B.M. Yep. It’s a number two.

All in all, The Unexpected B.M., much like Gramps goes to College, has some incidents of utter, unabashed insanity. And it’s got Rich Swingle at his kookiest, which is a great treat, of course. But overall, it’s less the bucket of laughs I had hoped it would be and more the unexciting slog that many Christian movies are. There’s glimmers of wild ineptitude and obliviousness, but not enough.