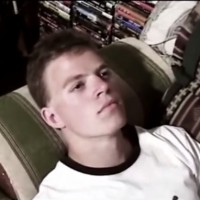 Leap is the first in a parkour Rapture series. That on its own probably would have been enough to draw me in, but what really captured my attention was the comparison made in the movie’s description on YouTube: “If you enjoyed the no budget charm of ‘Flywheel’, then you’ll love this first chapter of the Leap Trilogy!” Within minutes of starting the film, it is apparent that the comparison is generous: Leap begins with three teens walking together, all giving incredibly stilted line readings in the style of Tommy Wiseau, while the image jerks along with them because it was almost certainly recorded on a handheld home video camera. It’s not difficult to believe Chris Tempel (who wrote, shot, directed, edited, and scored the film) when he claims that the entire budget for the movie was $200.

The three teens who open the film soon meet a parkour (or “PK”) enthusiast who goes by the name Flyboy. His explanation: “My art caught on because of the internet. Many of us go by our online names to pay homage to that.” The teens are impressed with his ability to jump over railings and on top of picnic tables and therefore request training in the “art” of PK, which Flyboy and his girlfriend, who goes by the nickname “Sweetheart”, are happy to oblige. Incidentally, the conversation when Flyboy tells Sweetheart that he is going to train this group of teens in parkour is bizarre. It begins with an argument over their anniversary; Sweetheart asks that Flyboy plan literally the most banal anniversary possible (dinner and a movie), to which Flyboy acts as though this is a totally unreasonable request. The scene ends with both saying “I love you” with palpable sarcasm in their voices. This is clearly not a relationship that is built to last.

So the parkour training begins, with a montage filmed in black and white for some reason. Parkour is a major part of the movie, I understand, but it still goes on far too long every time a training scene erupts. The first has the teens following Flyboy and Sweetheart’s lead hopping, crawling, rolling, and running, all while generic hard rock music plays over the scene. Once the training is complete, the three teens invite Flyboy to their church. Even though he’s not a Christian, and even though Sweetheart warns him that they’re just trying to brainwash him into becoming one of them, he agrees to go. Once again, the conversation between the lovers is weird. “Parkour and religion are two different things,” Sweetheart cautions. “Parkour is our religion!” Flyboy angrily responds.

When he gets to the church, he is in awe at how hip and laid back it is. “This is a church?!” he gasps, looking at the nondescript gray walls inside the building. “He’s a pastor?” he gawks, as a tall man in a polo shirt introduces himself. Actually, maybe I misunderstood his reaction; perhaps it was not one of appreciation, but of confusion. Maybe he literally did not know what a church was before this experience. After all, once they all gather together in a sitting room, the pastor begins sermonizing about the End Times and two different people literally  ask the questions, “What are End Times?” and “What’s a Rapture?” I mean, the members of this church are totally blank slates.

Pastor Scott is perpetually smug as he casually begins telling his flock that the end of the world is nigh. The Bible says that the end of the world will be punctuated with things like war, disease, earthquakes, and “persecution”. These are all totally reasonable prophecies that aren’t just incredibly vague descriptions of things that happen all the time. Because these prophecies are so specific, Pastor Scott is able to point to things in the world that fulfill the prophecies. For instance, World War I and World War II are the “war” that the Bible talked about, and yes it is not weird at all that somewhere between sixty and one-hundred years have elapsed since those prophecies were fulfilled… the end of the world could happen any day now, just you wait! As for the “diseases”, Pastor Scott mentions swine flu, malaria, and of course AIDS (because why bother making a Christian movie without a good dose of homophobia). With a straight face, Pastor Scott claims that malaria is punishment for sin. I’m guessing this is a guy who still believes you should use leeches to draw the bad spirits out of the blood of the ill to cure them, because he’s clearly not living in this century. I don’t really think he goes into the part about earthquakes and “persecution”, I assume because there have been no Earthquakes since World War I.

Although this is all absolutely goddamn nuts, Flyboy finds it persuasive. He visits Pastor Scott alone to discuss his cautious skepticism. “Can you prove all that’s real?” he asks. Pastor Scott’s response is golden: “There are some things you just have to believe.” Right. Some things… things which are ridiculously outlandish and supported by no evidence whatsoever… you just have to believe them without having any reason to do so. You just have to. Makes perfect sense.

Pastor Scott goes on to say that there is ample evidence that Jesus lived (eh…), that he died (uh…), and that he rose from the dead (HA!), but that there is no real evidence that he sacrificed himself for the sins of mankind. That’s where you just have to believe it even though it is incomprehensible gibberish that doesn’t withstand the most basic scrutiny. It’s a—drum roll, please—leap of faith. And so we have a title.

Flyboy becomes obsessed. “It’s amazing how accurate the Bible is!” he beams. His friend Michael agrees, because one of the Bible’s spine-chillingly accurate prophecies is that knowledge will be increased. Oh wow, how could the Bible have predicted that unless it was the product of Divine Magick? Michael gushes: “It’s crazy! It describes our time exactly! Like with the internet and airplanes.” I’m not kidding, that’s a real quote. Pastor Scott is lucky his flock is so willing to eat up anything he says because his attempts to explain Biblical passages are incredibly weak. Somehow the group gets onto the topic of premarital sex, which is a big no-no. Why? Because 1 Corinthians 6:18 says that our bodies are a temple. Therefore sex outside of marriage defiles that temple. “Got it?” Pastor Scott asks. You or I might point out that he’s just making bold assertions without any reasoning or—oh yes, sorry, some things you just have to believe. Incredibly, Pastor Scott berates people who don’t believe that the world is coming to an imminent end. “Some people don’t read their bibles. They believe only what they’ve been told and accept it blindly, rather than look up the information themselves.”

“Accept it blindly,” the group all chants in unison. (Did that really happen or am I joking? Some things you just have to believe.)

Flyboy and his new parkour team decide to spread the word about the end of the world by doing cool parkour tricks to draw in crowds and then hand out Bibles and literature about Jesus. This is all going pretty well until they start getting threatening letters telling them to stop. Their immediate guess is that it’s a group of militant atheists, because obviously. Atheists are well known for sending death threats, that’s totally something that atheists do. As it turns out, though, it is not a group of atheists, but one lone atheist – Sweetheart! She kidnaps Flyboy and one of his proteges, Tina, holding a gun to each of their heads and demanding that they renounce God. She concocted this plan because she’s mad at God due to both of her parents dying when she was young. Flyboy and Tina escape, but not before Tina tells Sweetheart that she doesn’t believe in God. Tina did this to avoid being shot to death, you see, but after escaping gets shot in the back anyway. When Flyboy returns to his friends—following a “thrilling”, interminable parkour chase sequence that inexplicably involved doing a flip over a giant golden bulldog—the group mourns her death, of course, but they are aware that she is going to burn forever in Hell for denying God. And they’re all okay with this. Not one of them says, “Hold on, God is crazy and awful. Why do we worship a God who is clearly evil?” Not a single one.

The movie ends some indeterminate time later. Flyboy sees on the news that the United States and Europe have merged into one super-country and that the new leader of this super-country is requiring all citizens to get a microchip in their hands (the mark of the Beast). “I don’t believe it. It’s starting, just like the Bible said,” Michael shudders. Yes, because this is the kind of thing you just hear suddenly on the news one day. And it’s also something that’s totally possible. It’s probably going to happen any day now, honestly. Yep. Any day now, in real life, we are going to hear on the news that the United States and “Europe” have merged and that there is a new Supreme Overlord requiring surgical implantation of microchips. This is something it is reasonable to believe. How could you not? The Bible says it, so it must be true. After all, it predicted that war would happen. That’s all the proof I need.