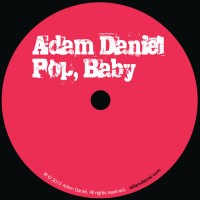 I first learned of Adam Daniel when “Breaking Up”, the lead-in track from his 1999 debut album Blue Pop played on my Pandora station (a station which I’ve dubbed Awesome Radio, incidentally). That song begins with a crinkly electronic sound, brash guitars, and a far-off voice yelling, “Yeah!” It’s pure power pop and it was infectious. It also felt like something I’d heard before. By that, I don’t mean that it sounded derivative or routine, but that it immediately felt like a classic, like something I should have already known. Digging into Daniel’s music, I found that his debut was pretty well-regarded, if not widely known. However, he had not released a proper album to follow it up until 2013’s Pop, Baby. It’s unfortunate that the world had to wait that long, because this album is as immediately engaging as his first.

Like Blue Pop, this album begins with a powerful, sugar rush of energy. This time it’s in the form of “Summer’s Coming“, a song which serves as both an immediately catchy, rollicking pop showpiece, and as a thesis statement about the album. As its 13 songs (49 minutes) progress, Daniel leans heavily on his virtuoso piano skills, gnarly noodling on the electric guitar, Beach Boys-inspired stacked vocals, and the occasional spacey electronic sound effect. There winds up being something of a pattern to the songs: on almost all of them, Daniel’s vocals abate for the sake of bridge-spanning guitar riff, and the songs frequently slow down or scale down to just Daniel’s voice and piano before slamming back into high gear with drums and guitars—but damned if the jam of the guitar, the heavy beat of the drums and that high-energy piano kicking back in didn’t get me every single time.

My understanding is that Daniel “wrote, arranged, produced, performed, recorded, mixed, and mastered the album” entirely on his own, meaning that all of the instrumentation and vocals (with some obvious exceptions) are entirely his own. That knowledge adds much to admire in songs like “Long, Cold Winter“—a stand-out track—which combines not only Daniel’s gliding piano work, guitar licks, powerful voice and steady drumming, but throws in bells and chimes, a tambourine pat, and liberal cymbal crashes, and then layers it all on top of an organ serving as the song’s base.

Though many of the tracks on Pop, Baby hew close to the basic template of being driven by sparkling piano, chugging guitars, and roaring drums (with spacey squiggles for flavor!), don’t imagine that the album is unvarying. Some of its highlights diverge mightily from this sound. Take, for instance, the stellar track “Invisible“, which coasts on a slow, sort of sleazy guitar groove over a mechanical, churning beat. A crackling sound permeates the entire song, giving a lo-fi feel to an expertly produced track. Primarily led by Daniel’s plaintive voice, he sings: “Holy father, where you been? I think I’m losing faith again.” Once Daniel gets to the central lament of the song (i.e. that he feels “invisible”), a choir fills the empty space as the electric guitar lets loose into another circuitous riff. It matches the semi-religious theme of the song well and gives the whole thing a sense of gravity.

Another song that deviates from the general sound of the album, but which is no less gripping, is “These Shy Things“. Daniel’s voice aches with lyrics that seem, to me, to speak of depression: “Sometimes I’m afraid and I really don’t know why. Sometimes I’m amazed you’re not dissatisfied. And if I don’t want to talk tonight, it’s nothing wrong—I just don’t want to shine a bright spotlight on these shy things.” The song is almost entirely carried by long, sustained organ notes and Daniel’s soothing voice. A piano twinkles in at times, but doesn’t interfere with the quiet, solemn emotion delivered by the artist’s voice and lyrics. When the song hits its most urgent lines, Daniel’s voice is layered on top of itself to better enunciate the sentiment of the song. At the same time, a group of violins add a subtle staccato underneath the vocals. (I may be wrong, but I think this is the only time that violins—or, I would guess, a violin keyboard effect—are employed on the album.)

There are a handful of songs that left me unimpressed. I’m thinking particularly of “Lullaby”, a song with sickeningly simple lines, such as when Daniel coos: “Pull your blankets right up to your chin…punch your pillow ’til its soft enough, curl up and know you’re safe and loved.” Although he does his best with the song, letting his vocals charge the way through the track, it ultimately feels out of place. It’s a largely quiet piece, with xylophones filling in for the drumbeat of other selections from the album. It may very well have been made with technical proficiency, but the child-like lyrics and perspective feel wrong (though, admittedly, this is an album called Pop, Baby with a literal baby on the album cover; then again, I’m no fan of the cover art either… hence my decision not to include it as the thumbnail accompanying this review).

Another track that feels like a swing-and-a-miss is “Your Gravity”,  a love song that feels a little too pat, a little too contained. Stylistically, it has an atmosphere like something from the 1950s, save for a twangy electronic affectation. Along with that throwback sound, the music feels somewhat bored, a constant and rarely changing beat with continuous cymbal crashes. It doesn’t do much to distinguish itself and ends up coming across as the one weak spot in the album’s A-side.

Those few weak spots aside, the overwhelming majority of the album is populated with raucous, captivating tunes which—much like “Breaking Up”—feel like instant classics. Between his skillful musicianship, soulful singing, and the lush production from what is essentially a one-man enterprise, Pop, Baby is a major accomplishment. Hopefully it won’t take another decade and a half before we get to see what else Adam Daniel has got up his sleeves.