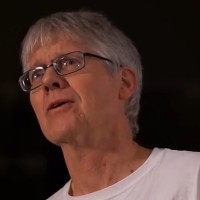 “I’m going to war,” Gramps says defiantly to the man exercising with him in an almost empty gym. I thought it a little strange that two men would stand inches apart from one another pulling on weights at a gym so empty that their voices echo, but it soon becomes apparent that there are so few actors in the movie that they’ve got to use the magic of cinema to achieve the illusion that other people exist. Later in the movie, they rely on darkness, close-ups, and the sound of murmuring off-screen.

In any case, Gramps is going to war because he’s decided to go back to college, where defenseless adults are being “brainwashed by liberal secular humanist professors.” That’s why he’s decided to go to school in the South, that bastion of liberal secular humanism! More specifically, he’s going to Tennessee, where his daughter (who won’t talk to him) and his granddaughter (whom he’s never seen) are living. As somebody who has seen movies before, I anticipated that the daughter and granddaughter would be revealed near the movie’s climax, but boy was I surprised when it never comes up again. The movie doesn’t even bother explaining why his daughter won’t talk to him–at least not explicitly. However, it is most likely because Gramps is an insufferable, self-righteous, sarcastic blowhard. As a protagonist, he’s incredibly hard to root for.

As Gramps leaves for college, he hopes aloud that “someone will grasp the concept that there really is a devil”, thus giving a pretty good idea of where this Christian movie’s priorities lie. Sure enough, though, he finds his Tennessee college overrun with sinful behavior. Early on, there is a scene of several girls gabbing in a dorm room; one of the girls (with the thickest Southern accent of them all) explains that taking Biology 100 let the air out of her “faith balloon” real quick. As if she were an understudy for Shannen Fields, the girl ponders: “I mean, how can Jesus Christ… be the son of Gawd… if science proves there is no gawd?” All the other girls nod in enthusiastic agreement, because obviously. Later, Gramps asks his student advisor whether a creationist can be in the science program. The advisor huffs that Gramps’ “superstitions and refusal to accept sound science” would be a problem. Finally, and most incredibly, Gramps enrolls in Biology 100; with a huge, creepy smile, the professor–who, incidentally, stands at a podium on a stage with a spotlight on her–asks how many people believe in God, and then crows that “by the end of the semester, almost no one stands to confess this foolishness!”

So, this movie is plainly ridiculous. Not that I wasn’t aware of that when I chose to watch Gramps goes to College (I assume the lower-case ‘g’ in “goes” is a creative decision… that’s how it was written when the title card appeared on screen). Still, the fact that the movie is totally divorced from anything approaching realism still managed to surprise me. Does its intended audience recognize that it is absurd from top to bottom? Giving the benefit of the doubt, I’ll assume that the movie is primarily meant to be a vehicle whereby arguments against evolution (and… fluoridation of drinking water?) can be transmitted to young-earth creationists looking for some pointers. The less charitable view is that writer and star Donald James Parker actually believes he’s got compelling arguments and deserves to walk through corridors with people applauding and chanting his name (something that actually happens toward the end of the movie).

Let’s get down to brass taxes, then. After his first day in Biology 100, Gramps has become something of a celebrity on campus for standing up to that witchy Professor Tucker… but his strange–what was it called again? Christianity?–still manages to perplex people. A couple of geeky guys ask him how he can be a creationist and a former computer programmer. Gramps challenges them to a thinking match instead. He explains that the brain is like a computer. How could the brain evolve through non-directed mutations? He goes on to question how an organism could survive without a brain, and whether the brain, lungs, heart, or blood evolved first, since all are interdependent on one another. The boys, minds suitably blown, rush off to the library to check out the book I Don’t Have Enough Faith to be an Atheist. Of course, Gramps is arguing from a place of pointed ignorance. Ignoring the way that evolution works entirely, he assumes all of the elements of a creature’s anatomy sprang fully-formed and independently out of a single mutation. In fact, the brain did not appear fully-formed; it began as a mechanism for controlling some minor task (movement, respiration, etc.) and continued to adapt as creatures’ changed positions required more abilities to thrive.

It goes without saying that Gramps spends no time at all explaining his theory of how God can spring animals fully-formed–brains, bones, blood, and all!–if evolution takes too much faith for him to believe. Then again, as he mentioned at the outset, he’s more interested in getting the word out about the devil than he is in explicating God.

Gramps is not even pretending to be reasonable at this point. He gets into a spat with Professor Tucker about the fact that natural selection doesn’t have any properties, e.g. weight, size, color, etc. Her answer that natural selection is the name for a process goes in one ear and out the other. He accuses Professor Tucker of trying to sell the students a pack of lies. Professor Tucker, because she is a construct of Donald James Parker’s inflated ego, hilariously refers to Gramps as a “worthy” adversary because he is bold and intelligent. They have a coffee date, where Gramps pulls out that old chestnut: “If you’re right, you won’t be able to yell ‘yippee, there is no God’ when you die, but if I’m right, you’ll know how wrong you were.” Super persuasive, very scientific. His argument against fluoridation of drinking water is even more airtight: there’s so much cancer, fibromyalgia, and other diseases in the world… isn’t it possible that this is caused by fluoridation of the water supply? When his opponent admits the mere possibility that this wild conjecture is correct, Gramps boasts, “I really schooled him in the application of science in the real world!” That is a direct quote.

As the movie nears its end, a girl dies from drinking too much alcohol and is brought back to life by the power of prayer. Professor Tucker comes around to Gramps’ goofy religious nonsense. She asks how tearing up at a sad movie fits into evolution. Do you really need to ask how empathy served as a survival instinct for the species? She next suggests that “information” is a third element of the universe, beyond matter or energy, and that this discredits evolution because the “information” that influences it had to come from somewhere else. She analogizes this to words written on paper: somebody wrote the words. Yet again, that is not how evolution works. I feel like Donald James Parker must be getting hung up on the word “selection” in the term natural selection. Evolution is not based on any conscious decision; it is only “selection” in the sense that a creature with, say, slightly bigger ears can hear predators coming earlier, lives longer, and passes along more of its genetic material. That’s not “information” in the way that words written on a paper are information. It’s more like the movement of sand toward the bottom of an hourglass, repositioning itself until it can pass through easily. Professor Tucker summarily quits her job, because she can no longer bring herself to stand in the spotlight of that darkened classroom teaching the fable of evolution.

Gramps too gets kicked out of school, for being a troublemaker, but not before a suddenly important intramural sports competition against an opposing team (called “The Demons”). Over the montage of sports events, a song repeats the supremely ghoulish phrase: “We are stepping out of the fire / We’ve been purged from our fleshly desires.” Gramps’ team wins, probably, and he exits the building with head held high and a hallway full of young adults cheering for him and patting him on the back, just like he always wanted. Instead of going straight to credits, however, the movie transitions to a group of actors who portrayed students in the film, all reading anti-evolution (or at least vaguely anti-evolution) quotes from scientists and poets. Each student stands in turn, reading their selection from a sheet of paper in their hand, and flubbing this simple task repeatedly. One guy seriously reads about a Nobel Prize winner, then corrects himself to pronounce it “noble”. When the credits finally do roll, they are accompanied by another eerie song which consists of nothing but the phrase “Chosen to be a soldier” seemingly one hundred times.

In all, Gramps goes to College is unfortunately not the laugh riot I had supposed, but it certainly had a lot of off-the-wall material that had me scoffing in amazement. It definitely was not boring; in context, that’s actually pretty high praise.