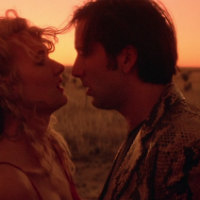 The only other David Lynch film that I have seen all the way through prior to Wild at Heart is the deliriously trippy Mulholland Drive. And I gots to tell ya, after seeing that mindbending mess of a movie, I thought that I had had enough of Lynch for one lifetime. But, oh, the promise that comes in the form of Nicolas Cage bashing in a guy’s head in the opening shot of this movie was too much for me to resist. David Lynch film or not, I am enamored with Nic Cage and any movie that begins with him crushing a guy’s skull on a marble staircase is the kind of movie I want to see.

Unlike in Mulholland Drive, there is a sort of story here. Sailor (Cage) and Lula (Dern) are two young lovers on the run from the law and from Lula’s mother, who has hired detectives and hit men to track down Sailor and have him killed. So the lovers keep on the run and do that other thing that lovers do — namely, make love.
Sailor is kind of a modern day Elvis Presley, Lula is just head-over-heels in love with him. They run across eccentric people on their journey, the sort of people who inhabit Lynch’s dystopian movie-world; these are the sort of people who talk about a dog, mention that it’s interesting that you’ve pictured a dog mentally even though I haven’t told you what sort of dog I own, and end the conversation with a wild barking. That is to say, it’s all very ridiculous.

Roger Ebert seems to think that Wild at Heart is a parody. Is it? I’m not really sure what it’s parodizing, if it is. Is it just a parody of movies in general? That would explain the fantastic jump cuts, the blares of music, the stange inter-splicing of memory sequences and the numerous artsy close-ups on lit cigarettes. And of course the violence, which veers rather close to campiness at times.

I don’t know, maybe I would have disliked the movie more than I do if I weren’t so forgiving of Nicolas Cage. There’s a whole sort of subplot where The Wizard of Oz is used as a metaphor for happiness or something. This doesn’t really work very well at all, and the times when this ‘metaphor’ is brought front and center are among the weakest in the film.
Crispin Glover’s name is highly billed at the beginning of the movie, but his work in the film consists of one superfluous scene. That was a real disappointment.

In conclusion, I liked Wild at Heart more than Mulholland Drive, but that’s not really saying much because I like pretty much every movie more than I liked Mulholland Drive. This movie is still pretty irritating in its need to be wacky in an indie-artsy way, despite the fact that it’s got a little bit of a more conventional structure.

It’s just not that good.