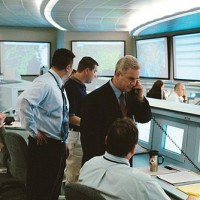 Watching director Paul Greengrass’ historical drama United 93 puts me in mind of a handful of other true-life tragedies put to film. The first, perhaps unsurprisingly, is Oliver Stone’s similarly-themed World Trade Center; both were released within months of one another – just five years after the events of September 11, 2001. The second is Night and Fog, the chilling short documentary about the horrors of the Holocaust; that film was produced and released just a decade after the Holocaust ended. There is one part of Night and Fog that has stuck with me, and that is a description by the film’s narrator of tourists who visit the out of commission gas chambers and crematoria in order to take self-photographs there. I wrote, of this revelation: “Is a decade enough time to return to the sites of unspeakable atrocities without silent solemnity? For that matter, is 60 years?”

At the time of this writing, it has been just over a decade since the events of September 11. In the grand scheme of things, the wounds caused by the infamous terrorist attack are relatively fresh for our nation. We are still embroiled in a tumultuous relationship with Iraq spawned by then-President Bush’s zealous “response” to the attacks. Yet, for we as individuals – and especially so for those of us with no real connection to New York City beyond patriotic sentiment – the distance seems great. This year’s crop of college freshmen were only around five years old at the time of the attack. Nevertheless, for those of us alive and aware of the significance of the event at the time it occurred, it still manages to retain some weightiness, although clearly not the same emotional pull that bonded us together in the immediate wake of the attack.

I write all this because I remain uncertain how to process the innate significance of the events being recreated on-screen. I was able to better respond to World Trade Center because it occurred to me that that film was meant to be viewed on a large scale. It was full of archetypal characters and flowery speeches. Some read it as exploitative, but I approached it as a document of a specific time and era. It was a patriotic movie made for a people who were eager to be reminded of the patriotism and nationwide sense of communion the shock of that morning projected onto us. But United 93, I think, is attempting something different. Instead of reminding viewers of some greater ideal that sprung from the wreckage of the towers, its goal is to humanize those involved in the hijacking of flight 93, which crashed in Pennsylvania before causing greater damage.

Maybe humanize is the wrong word, given that few of the characters are given identities beyond their role as “passengers” on board the plane, or as persons working with the FAA to figure out how to respond to a massive, unthinkable takeover. Memorialize? The movie treats the situation with an appropriate level of seriousness, on the part of all parties involved – including the hijackers. What this group of terrorists was planning is undoubtedly wrong, and the movie doesn’t pretend to fully understand or sympathize with their motives. Yet they are visibly scared, anxious, and alternately uncertain and brazen. The passengers themselves have individual reactions, yet we view the same building determination from the group as a whole as they become more confident in their plan of action. All of this is heightened dramatically by Greengrass’ you-are-there jerky camera style and a suitably intense score driving home the importance of each moment. It doesn’t come across as cheap or tacky, though that’s maybe part of the reason I’ve avoided the film for this long – it maintains a serious tone throughout, and the movie remains harrowing despite our foreknowledge of the outcome.

Yet perhaps even more remarkable, to this viewer, was the recounting of events on the ground. We are introduced to newly-appointed FAA National Operations Manager Ben Sliney (playing himself). I found it a bit of unbelievable movie contrivance that the 9/11 terror attacks would occur on the same day that Sliney was promoted, but research after the fact indicates that this element of the film is true-to-life. The FAA sequences are filmed in dark rooms with blinking computer monitors showing little green plane symbols moving slowly across their screens. It’s pandemonium, as planes begin going off-course and questions are screamed across the aisles about whether said planes have been hijacked or have merely diverted for some other reason. The tension is thick, and every decision is on Sliney’s shoulders alone. That the movie was able to pack as much drama into what might otherwise have been a dull cutaway from the primary action inside the airplane is extraordinary. Maybe I don’t understand what it’s like to assault a group of suicide bombers on an out-of-control airplane, but I can easily empathize with the “prisoner’s dilemma” that Sliney felt himself being trapped inside. The moment when the second airplane hits the towers and all motion at the FAA freezes while the staff, as humans and American citizens, attempt to wrap their heads around what they’ve just seen… it’s extremely powerful.

And what makes it powerful is not the impact itself. Greengrass apparently spliced in actual footage of the impact, as opposed to recreating it somehow for the film. That footage already has a potency disconnected from its use in the film. What the movie adds is the startled reaction from the FAA’s command center. Many times since 2001, I and others have asked, “Where were you on September 11th?” We remember the moment, maybe more than the incident itself. We remember the effect it had on our psyches, maybe more than the specific images of terror that accompanied the crumbling of the towers. This movie captures that feeling, and it honors the men and women who died both in United 93 and the attacks generally, without crossing the line into mystical reverence for the citizens who became the “heroes” of the story or creating caricatures of its villains. It treats its subject with an appropriate level of respect, and I suspect it will serve as an effective device for those too young (or perhaps not even born) at the time of the attacks to appreciate their magnitude, so that they will be able to better comprehend what it felt like to live in that moment.

It’s all well and good to post an image of the twin towers with a slogan like, “Never forget.” But even that turns the buildings into a symbol. It detaches them from the emotions of that day and replaces it with some pat patriotic or xenophobic battle cry. While we felt camaraderie on September 11, 2011, surely, the narrative of strength through unity to overcome hardship is too sentimental. Maybe that did occur, after the fact. But what happened that day was a response much more instinctual, adrenaline-charged, desperate, and improvised. As with any fictional retelling of a real-life event, there’s room to be critical of choices made in the presentation, and in the inferences and guesses about what actually occurred in the air. But overall, I think the movie solidified something we might have forgotten otherwise: 9/11 was not merely about terrorism or heroism, but instead about decisiveness in the face of confusion and justified panic.