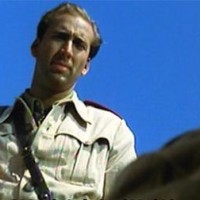 I suspect that the target audience for Time to Kill is mainly Nicolas Cage completists like myself, those lucky few who have spent months scouring their local video rental stores and Netflixes for films starring Nic, and have finally found that they only have one movie left starring the Cagemaster and that one is an obscure Italian film that is out-of-print and therefore only available for purchase online.

Well, here it is. Cage plays Enrico Silvestri, an Italian soldier stationed in Ethiopia (apparently in 1936, according to the Flixter synopsis). Suffering from a painful toothache, Silvestri heads off to find a dentist but gets side-tracked when his driver gets into an automobile accident. A man tells Silvestri of a shortcut to the dentist’s camp: just follow the trail until you get to the lake, which is where you will see the road leading to the camp. Real easy. But when he loses the trail, Silvestri instead stumbles upon a young African woman named Mariam and, much as any of us would, rapes her. But like most rapists do, Silvestri falls in a sort of half-love with Mariam and the two share some raw eggs and a cave together.

One thing leads to another, and when Silvestri returns to camp he has a large gash on his hand. He attributes it to having fallen during his trek to the lake, but when he later learns that certain women from the Ethiopian villages have leprosy, he begins to worry that maybe his fling may have given him that deadly disease. Of course, due to some unforeseen circumstances involved with Mariam and to the fact that lepers are herded into their own little colonies away from the rest of mankind, Silvestri must keep his affliction a secret while trying to find out whether he really is suffering from the disease and how he can get back home to Italy without being noticed.

The movie is very slow going near the beginning, but as Silvestri’s paranoia begins to take hold of him, the tension ramps up. He loses the ability to trust anyone, and his previously relaxed demeanor is replaced with boiling anger. He treats the locals like they are idiots, and he treats his fellow soldiers as though they are enemies.

Despite the fact that Time to Kill actually does end up having a sort of interesting Roald Dahl-ish plot going on, the movie is hampered by its uniformly monochrome settings. The sun is beating down on the countryside continuously, bright light on the tan shades of sand and clothing and skin. It’s not hard to get lost in the monotony of the scenery. Also, the ending takes a sharp detour that effectively explains nothing and seems like it was tacked on and then cut in half without much regard to the result. After working up all the effort to stay connected with the story, it is quite distressing to be handed a half-hearted ending like the one that this movie provides.

There really are some good things about Time to Kill, but they are far outnumbered by the frustrating and boring things.