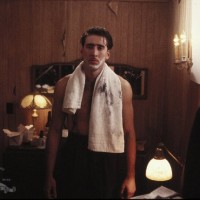 I am not the person who should be reviewing The Cotton Club. I say that not only because of my general antipathy toward the films of Francis Ford Coppola, but also because of the fact that I was drifting in and out of sleep through most of the film’s second half.

I’d almost feel guilty giving the movie a star rating, since I honestly didn’t see the film in its entirety. But when considering the question of whether to rate it, I decided that since I am not a professional film critic and am mostly just writing these reviews for my own sake (and that of whoever else cares to read them), I am under no obligation to be a credible source. And I announced my limitations early on, so that’s gotta count for something. And most importantly: the only reason that I cared to watch this movie in the first place was because I am trying to finish seeing the entire Nicolas Cage filmography; I saw every scene with Cage in it, so I feel that I accomplished that goal.

Nicolas Cage did an okay job in this film, although this early in his career, he still plays it mostly straight. It’s not really until Peggy Sue Got Married, in 1986, when Cage started to really bring a signature to his performances. Even when playing a “punk” in Valley Girl (1983), the character is not especially exciting.
And so it is here. Cage plays the brother of Richard Gere here, a sweet kid who gets sucked into a world of crime – eventually demonized for a crime that he did not commit, and forced to live in the shadows. It’s a tragic story, indeed, but it’s a subplot – the C-story or D-story – and so it doesn’t get the attention it deserves. I didn’t even realize that Cage was Gere’s brother until later in the movie, and they certainly didn’t have any sort of relationship.

I guess that’s the thing that most people who criticize The Cotton Club mention. It’s got a C-story and a D-story, so I guess you could say that the narrative gets the better of Coppola. There’s the story of Dixie (Gere), who is a cornet/piano player that gets drawn into the world of organized crime accidentally. There’s that, and then there’s also a love interest… who is the, I don’t know, sex slave (minus the sex) for one of the crime bosses. Then there’s Sandman Williams (Gregory Hines), a black tap dancer who has a strained relationship with his brother, is trying to get famous, and is in love with a woman of mixed race. Then there’s the Cage story. Then there’s a love story involving Bob Hoskins and Fred Gwynne, which is the most touching and romantic of all.
It’s true that I missed a lot of the movie – the ending, for instance – but I do find it amazing that one scene with Hoskins and Gwynne was more emotional than the other two hours of film were.

In conclusion: I saw enough of The Cotton Club to check it off my list of Nicolas Cage films. I’m not really interested in going back and seeing what I missed.