The Boy in Blue 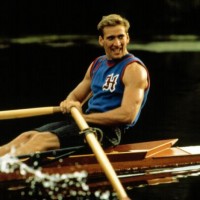 It tells the story of Ned Hanlan (Nicolas Cage), a master sculler from Canada. Sculling, for those of you who have never witnessed a sculling match, is basically just rowing a boat backward – in a race. Hanlan easily beats his opponent in the opening scenes, even after being knocked out of his scull (that’s what they call the boats, right?), thus letting we the viewers understand that he is a superb athlete.

A shady sort of manager comes a-callin’ on Hanlan, trying to get him to go to Philadelphia in the United States to compete in a sort of world-class sculling competition. Although initially reluctant to go along, Hanlan is blackmailed by this manager and the two become great friends. So they go to Philadelphia, where they meet up with a crazy old kook who has invented a sculling seat that slides, giving the sculler an easier time at his sculling, and ultimately helping him to scull faster.

Through a series of wacky circumstances, Hanlan finds himself on top of the world and then plunged to the depths of despair, only to predictably re-emerge as the greatest sculler of the nineteenth century – a title that will not soon be forgotten. There is an obligatory love interest, and a none too subtle reference to Rocky in Hanlan’s grueling training regimen. And then there’s, um…

Well, that’s really about all there is. Christopher Plummer plays essentially the same character that Paul Newman played later in The Hudsucker Proxy – a devilish businessman with a half-smoked cigar perpetually clenched between his teeth and a thoughtful glint continually in his eye. Guess what? He’s the bad guy.

What else do you want to know? I’m not sure what else I can tell you. Oh, here’s something: the movie is rated R. There is no violence (save for a couple of bloodless fist-fights), practically no coarse language (unless “bugger off” can be considered coarse), no drug use, and a single topless scene. I really can’t understand why this movie was thought to warrant an R rating.

In conclusion, The Boy in Blue is mostly lackluster. The only real reason for watching it is if you are trying to view every Nicolas Cage movie, as I am. And even then, the best one can say about the movie is that it isn’t bad, really. If that’s good enough for you, then I guess The Boy in Blue is a resounding success!