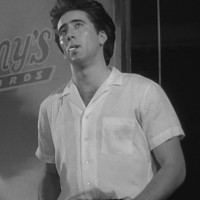 Francis Ford Coppola’s Rumble Fish is filmed in black and white, except for a few choice elements which remain in color. The clouds are constantly swirling by much faster than they could in real life. The camera is at an angle. Every locale echoes sound.

And that’s all there is to the movie. Oh sure, there’s a kind of a story about a wannabe street thug named Rusty James (Matt Dillon). Rusty James thinks of his older brother (Mickey Rourke) as some sort of god incarnate and tells everybody he meets about how cool his older brother is and how he’ll be like him when he gets older. Funny thing is, Rusty James can’t see that his brother, he ain’t the same guy he was before. He looks at the world with a smile on his face that doesn’t seem to be a sign of happiness, so much as sedation. The smile of a man resigned to his fate and enjoying the ride.

But this is about Rusty James. His story is this: he’s living in the past. He’s living in his brother’s memory, trying to be the street thug that he thinks his brother was. He gets in fights, but never wins. He has a girl, but doesn’t treat her the way he should. He leads a pack of other boys, but his leadership is questionable – even he arrives late to the pre-arranged fights. And so, yup, that’s about it. An hour and a half to tell you that Rusty James needs to come to terms with the fact that he is living a different life than his brother is. And it’s not like there’s anything else interesting going on, either. Maybe it’s the echoing sets, but I kept thinking of the movie as a play. And much as in a play, our focus is on the actors on-stage at any given moment and nothing else can happen. If you aren’t absorbed by the teenage melodrama that is Rusty James’ life, there’s nothing else here for you. Except artsy shots of motorcycle fenders reflecting the clouds.

There’s nothing of any value here. The story is a bore, the symbolism is over-bearing, the artsy directing style is grating, and the actors don’t exactly have to do much stretching. It’s a crappy student film is what it is. It’s Jim Jarmusch with half a plot.

Rumble Fish is style over substance. But even the style’s got flat feet.